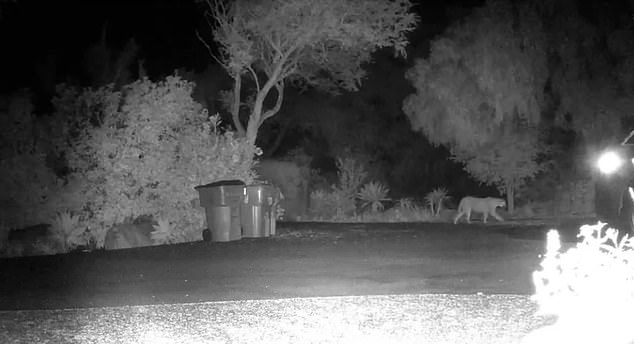 By James Gant For Dailymail.Com

Prince Harry and Meghan Markle have been warned about a mountain lion stalking their neighborhood in California.

The couple were ordered to lock down their $14.6million mansion in Montecito after sightings of the vicious beast.

They were also told their flock of chickens could be an easy target for the predator and entice it towards their sprawling enclave.

The mountain lion was caught on outdoor security footage prowling just five miles from their home.

The clip showed the animal skulking down a homeowner’s driveway, past his bins and his car, before heading off into the distance.

Experts suggested the lion may have headed down from the hills in search of food and water amid the widespread drought crippling California.

The couple were ordered to lock down their $14.6million mansion in Montecito after sightings of the vicious beast (pictured)

Mountain lions: 220lb beasts that take down ELK and are the second largest big cat in the Americas

Mountain lions are the second largest big cat in the US after Jaguars.

They can weigh up to 220lbs and reach 9ft from nose to tail. They have been known to attack humans and even take down elk when hungry.

LA is one of only two large cities in the world where big cats live within the boundaries of the town, with Mumbai being the other. There is believed to be around 100 living in and around the Santa Monica Mountains.

Scientists from the National Park Service have tagged most of them with GPS collars. Their lives are endangered in the region by loss of habitat, with many hit by vehicles as they desperately search for food.

Some have also started inbreeding because they cannot escape their own area to find a suitable mate. Rat poison has also been a huge threat to them, with many households laying it out to rid their neighborhoods of vermin.

A staggering 28 out of 29 mountain lions tested in a study by the NPS found anticoagulant compounds in their systems. Seven have also died due to the chemicals.

Executive Director of the Montecito Association Sharon Byrne said: ‘The fact we have security footage shows though that residents are taking this seriously as it was shot by a camera which is what we’ve been urging residents to install.

‘We want all locals to secure their homes and secure their chicken coops and whatever other animals they may have.

‘Chickens can be a fast, easy source of food for hunting animals so they have to be safe and secure.

‘We also urge residents to secure their garbage so animals can go rummaging around for scraps, to have night lighting, alarms, cameras and so on.

‘Mountain lions are solitary creatures and ultimately, they don’t want to be around people so we’re hoping this one moves on by itself.’

Harry and Meghan also have two rescue dogs to look out for, which could also be targeted by the mountain lion.

The footage, recorded on July 23, has terrified locals who fear the beast could attack their children or pets.

The homeowner who took it had only recently installed the camera after a request from local authorities.

One local told the Sun: ‘There are all kinds of animals in the neighborhood – coyotes, bears and deer – but it’s rare to see a mountain lion.

‘We’re in a drought so the animals are thirsty but also there have been fires and a mudslide in recent years which seems to have brought down the bigger animals.

‘People in the area feel safe during the day but they’re taking precautions during the night.’

A mountain lion last killed a human in California in 2004 when a 35-year-old man was mauled to death at Whiting Ranch Regional Park in Orange County.

The last victim in the Montecito area was in 1992, when a none-year-old boy was attacked at Gaviota State Park. He lived but was littered with 50 puncture wounds and needed 600 stitches.

A plaque on the side of the hut reads ‘Archie’s Chick In. Established 2021’

The concerning update comes just a week after Meghan celebrated her