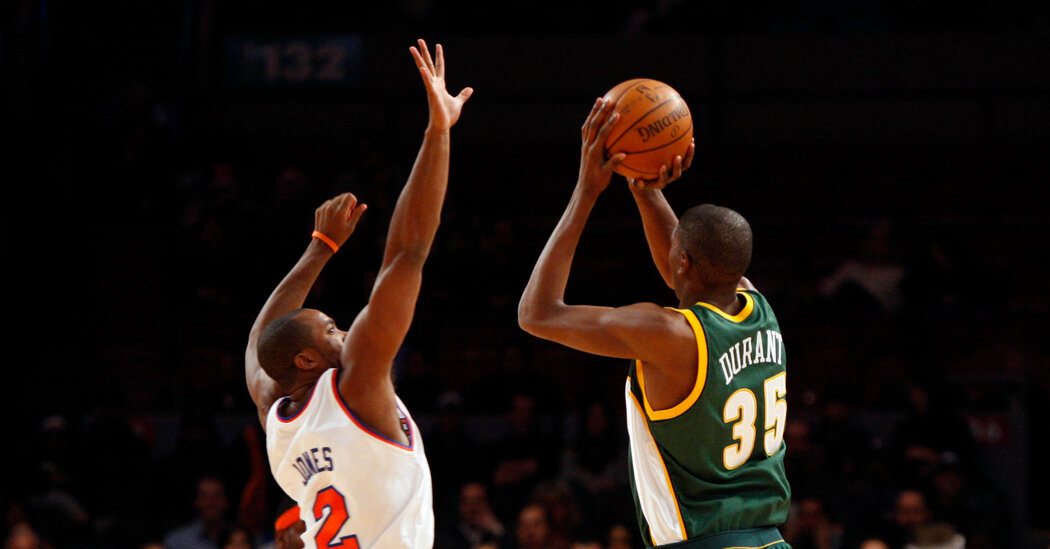 SEATTLE — If you’re a fan of the Seattle SuperSonics, jilted long ago despite decades of loyal love, you’re seriously happy for the last great talent from your team.

That would be Kevin Durant.

After a year spent rehabilitating a torn Achilles’ tendon, Durant now seems to be living his best life in Brooklyn as the leader of the Nets. His odds of winning a third N.B.A. title received a significant boost when a blockbuster trade reunited him this week with James Harden, his close friend and former Oklahoma City Thunder teammate.

Durant, Harden and Kyrie Irving on the same team? Scintillating, so long as they end up on the same page.

But if you’re a die-hard Sonics fan — and yes, count me in that group — the happiness felt for one of basketball’s transcendent superstars comes with a flip side.

We see Durant and are forced to reckon with all the unfulfilled possibilities.

Recall that the slim, do-everything forward spent his rookie season in Seattle. He was only 19, but he led the team through a dreary and uncertain 2007-08 season. He wasn’t just good, he was prodigiously good; so full of talent and joy that watching him made the doomsday talk of the Sonics’ possible relocation drift away.

Then reality hit. April 13, 2008. The last game played at the old KeyArena: a win sealed by a Durant jump shot.

Soon the team moved to Oklahoma City, where it began anew as the Thunder. (Pardon the crankiness, but they’ll always be the Tumbleweeds to me.)

It’s been 12 years, but the stinging questions remain.

What would have happened to Durant and our team if the Sonics had never left?

And how much should fans expect their devotion to be mirrored by professional sports leagues, team ownership and the players we most admire?

I’m typical of many in Seattle. The Sonics will always be in my blood. I’m comfortably middle-aged, but I can close my eyes and remember my first N.B.A. game: the bright colors and sharp sounds and even the smells of buttered popcorn and roasted peanuts in the old coliseum nestled near the Space Needle.

I was 6, and the Sonics were playing Jerry Sloan and the Chicago Bulls. I can still feel my father’s humongous hands as he led me to our seats.

A few years later, when my parents divorced, my father kept our connection close through the Sonics. We went to dozens of games, seated almost always near the rafters. We saw Julius Erving’s first appearance in Seattle — all that grace and power and coolness.

We were there in 1978 when the Sonics lost to the Washington Bullets in the N.B.A. finals.

In 1979, we watched Gus Williams, Jack Sikma, Dennis Johnson and my dad’s friend Downtown Freddie Brown as the team won its only league championship.

Years later, Shawn Kemp and Gary Payton formed a powerful, legendary duo, but our hearts were always with those 1970s teams.

One more memory, this one bittersweet. When my father was dying, far too early at age 75, we rode together in an ambulance to a nearby hospice. I held his hand again as he spoke of our most cherished times. “The Sonics,” he said. Then he recalled, one last time, the glorious, arcing accuracy of Fred Brown’s jump shot.

I know I’m hardly alone. We bond over teams, over remarkable wins and searing losses and athletes who remain ever young in our mind’s eye.

Fans all over the country, who root for all kinds of teams and players, know that love. It is steadfast, faithful and rooted deep into our souls.

We also know the risk. There are no guarantees that devotion will be rewarded with loyalty in return. (Just ask the Houston fans who have stood behind Harden since 2012.)

Two years after my father’s death, the Midwestern ownership group that had bought the Sonics moved Seattle’s first big-time professional sports team of the modern era to Oklahoma.

The fact that the team had been a vital part of one of America’s greatest cities for 41 years did not matter. Nor did the fact that Seattle was known to have one of the most passionate fan bases in sports.

Nothing mattered but the bottom line. The N.B.A. wanted a fancy new stadium, and taxpayer money to fund a big chunk of it. Seattle’s political leaders balked. There was no compromise.

The city lost the Sonics and the one player everyone imagined as a franchise cornerstone. The one player who could have brought another title and forged more remarkable seasons, maybe for a decade or longer.

We have never relinquished our passion for Durant. He matured during an era of constant player movement that seemed to be foretold by the uprooting of the Sonics. He came to personify the modern superstar. He bounced from team to team to team, winning an M.V.P. and world titles and never quite content in one place. But to us he’s still the wide-eyed teen who conjured our last flash of basketball brilliance. We can’t let go.

It helped that he never forgot the city that birthed his N.B.A. career. When his Golden State Warriors came to Seattle for an exhibition in 2018, he wore a vintage Shawn Kemp jersey and gave the sold-out crowd all they could ever want to hear. “I know it’s been a rough 10 years,” he said. “The N.B.A. is back in Seattle for tonight, but hopefully it is back forever soon!”

Will that ever happen? To pine for it is to be whipsawed between hope and despair.

Whenever N.B.A. commissioner Adam Silver utters a single sentence that could be divined as giving a nod toward the Sonics’ return — as he did recently when he spoke of league expansion as “Manifest Destiny” and gave a tip of the hat toward Seattle — the local news goes into overdrive with stories about a possible return.

Contractors are rebuilding the old KeyArena, soon the home of the N.H.L.’s Seattle Kraken, an expansion team. They have gutted the old structure. Close to $1 billion will go toward increasing its size and prepping it for multiple sports — pro basketball included. The whole endeavor is led by Tim and Tod Leiweke, brothers connected to the N.B.A. and Silver for decades who make no secret of their desire to have an expansion team playing in their gleaming new edifice.

Does all this mean the Sonics are coming soon? Maybe. But then again, maybe not.

So Sonics fans keep holding tight to the one last superstar to have played for our team.

And we’re still dreaming of the future.

I can see it now, in two years or maybe five, the SuperSonics back at long last. The first big free-agent signed to herald their return? Kevin Durant.

Sorry Brooklyn, there’s no such thing as loyalty in the N.B.A., but at least you would still have your team.