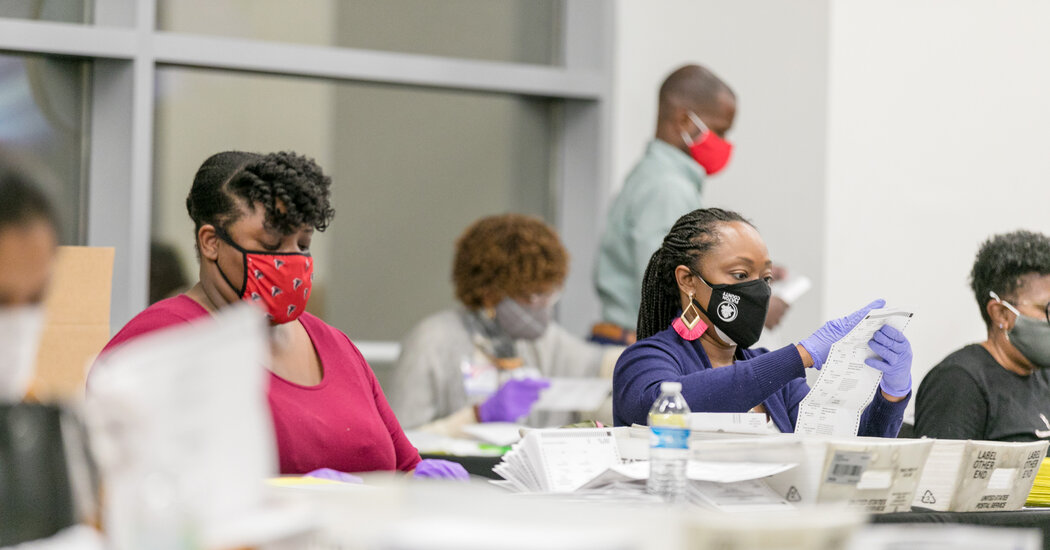 ATLANTA — Georgia’s statewide hand recount of more than five million ballots reaffirmed on Thursday that President-elect Joseph R. Biden Jr. notched an upset in a state that has long been considered a Republican stronghold.

The results of the process were released on Thursday evening by the office of Secretary of State Brad Raffensperger. President Trump’s campaign demanded a hand recount last week, and shortly thereafter Mr. Raffensperger announced that he would do so as part of a “risk-limiting audit.”

The audit concluded that the original outcome remained “as originally reported,” according to a news release from Mr. Raffensperger’s office. The audited vote totals showed late Thursday that Mr. Biden defeated Mr. Trump by 12,284 votes, with Mr. Trump gaining 1,872 net votes compared with a tally officials gave earlier in the week.

The secretary of state’s office said a manual tally of every presidential vote cast was necessary to meet “the confidence threshold required by law for the audit.”

After The New York Times and other national news outlets called Georgia for Mr. Biden last week, Mr. Trump disparaged the electoral process there, making baseless accusations of fraud as part of a broader effort to undermine confidence in the presidential election. A Thursday evening fund-raising email from the Trump campaign referred to the Georgia audit as “a joke.”

The Biden campaign released a statement on Thursday saying that the hand-counting of ballots “simply reaffirmed what we already knew: Georgia voters selected Joe Biden to be their next president.”

Though the result was something of a foregone conclusion, the audit took place amid escalating tension over the election outcome. Senators David Perdue and Kelly Loeffler, Republicans who are facing tough runoff races in Georgia, disparaged Mr. Raffensperger and accused him of mismanaging the election.

On Thursday, Floyd County’s Board of Elections voted unanimously to fire its chief election clerk, Robert Brady, according to Dr. Melanie Conrad, a board member. Mr. Brady was fired after officials found 2,600 ballots that were left uncounted before the county’s initial certification of votes.

The newly discovered ballots ate into Mr. Biden’s statewide lead, which stood at 14,156 votes earlier this week. But most of the state’s 159 counties saw only minor changes in their tallies, with the updated vote totals differing by single digits.

The state must certify the election results by 5 p.m. on Friday. The Trump campaign then has two business days to request a formal recount because of Mr. Biden’s narrow margin of victory. That would be conducted with high-speed scanners.