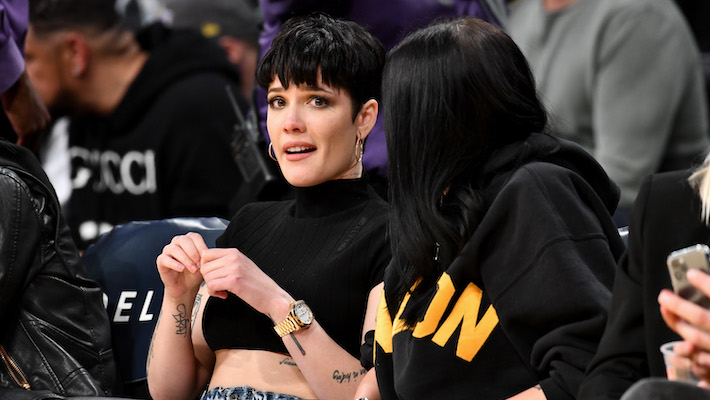 Back when the Lakers went on their 2020 NBA Championship run inside the bubble, Halsey launched a basketball-specific Twitter account that quickly became both a good luck charm and a lightning rod. For over a week after the @Halseyandone account went live in September of last year, the Lakers went on a winning streak before beating the Miami Heat in the finals a month later. The pop star tweeted out on the eve of the Game 6 clincher that “my experience has been completely amplified by this account.”

It was pretty clear that Halsey was a bonafide NBA fan. They praised the Heat’s East run, then talked smack to the Miami Heat, showered Alex Caruso and Rajon Rondo with love, and hoops fans (and haters) ate it up.

The account clocked well over 100K followers. But as they say, seasons change, and soon after the Lakers got bounced by the Phoenix Suns in the 1st round of the 2020-21 playoffs, the account went dormant. One month later, Halsey’s son Elder was born. There are more important things in this world than Twitter. (Take notes. You know who you are)

But the seasons have changed again and now Lakers superfan Halsey is back in the hoops twitter game and Elder is apparently along for the ride. “Now I’m literally Halsey and 1,” she tweeted with a downright adorable photo of little Elder in full Lakers gear.

Game 1 of the Lakers season was as up and down for the Lakers, just as much it was for @Halseyandone. Anthony Davis was a giant in the paint in the first three quarters and Halsey promptly showed their allegiance to The Brow.

Then things took a turn for the worst in the fourth quarter. New Laker Russell Westbrook showed that he’s still very much a below average outside shooter and couldn’t really buy a bucket from most anywhere on the floor. He was a paltry 4 for 13 shooting and sported a game worst -23 rating en route to err…leading…the Lakers to a 121-114 loss to the Warriors. Halsey was not pleased and tweeted “I’m gonna puke.”

Not the greatest debut for the greatest basketball team in Los Angeles. But hoops heads and Halsey fans can rejoice that the best NBA x pop star crossover Twitter account is back.