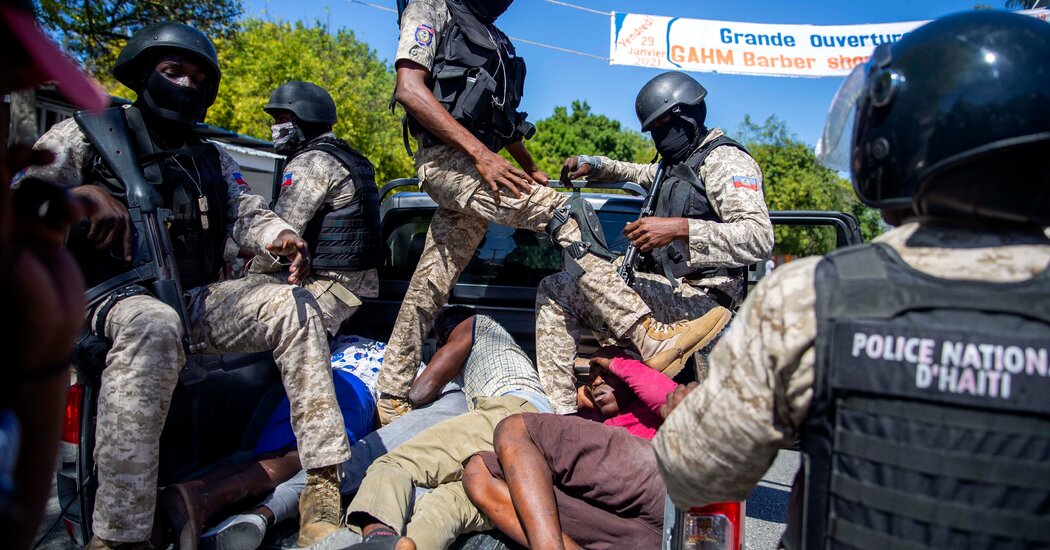 PORT-AU-PRINCE, Haiti — The poor now target the poor in Haiti. Many fear leaving their homes, buying groceries or paying a bus fare — acts that can draw the attention of gangs out to kidnap anyone with cash, no matter how little.

Many schools shut their doors this month, not over Covid-19, but to protect students and teachers against a kidnapping-for-ransom epidemic that began haunting the nation a year ago. No one is spared: not nuns, priests or the children of struggling street vendors. Students now organize fund-raisers to collect ransoms to free classmates.

Their hardship may only worsen as Haiti hurtles toward a constitutional crisis.

The opposition has demanded that President Jovenel Moïse step down, saying his five-year term ended on Sunday. But the president is refusing to vacate office, arguing that an interim government occupied the first year of his five-year term.

In a defiant, hourlong speech on Sunday, Mr. Moïse heaped scorn on his detractors.

As tensions mounted on Sunday, the government announced the arrest of over 20 people, claiming they had been involved in a plot to overthrow and kill the president. Those detained — on charges the opposition said were trumped up — included a Supreme Court judge and one of Haiti’s police general inspectors.

After years enduring hunger, poverty and daily power cuts, Haitians say their country, the poorest in the Western Hemisphere, is in the worst state they have seen, with the government unable to provide the most basic services.

Many fear the current political tensions will only worsen the country’s paralysis and poor governance. By Sunday afternoon, clashes erupted between protesters and the police in three different cities across the nation.

Haiti is “on the verge of explosion,” a collection of the country’s Episcopal bishops said in a statement late last month.

Over the weekend, Haiti’s judiciary branch sided with the opposition, a disparate grouping of activists, politicians and religious leaders, and ruled that Mr. Moïse’s term ended Sunday.

On Friday, the United States government weighed in on Mr. Moïse’s side — an important perspective for many Haitians, who often look to their larger neighbor for guidance on the direction the political winds are blowing.

A State Department spokesman, Ned Price, supported Mr. Moïse’s argument that his term ends next February and added that only then “a new elected president should succeed President Moïse.”

But Mr. Price also sent a warning to Mr. Moïse about delaying elections and ruling by decree.

Mr. Moïse has led by presidential decree since last year, after suspending two-thirds of the Senate, the entire lower Chamber of Deputies and every mayor throughout the country. Haiti now has only 11 elected officials in office to represent its 11 million people, with Mr. Moïse having refused to hold any elections over the last four years.

Mr. Moïse is seeking to expand his presidential powers in the coming months by changing the country’s Constitution. A referendum on the new Constitution is set for April, and the opposition fears the vote will not be free or fair and will only embolden his budding authoritarian tendencies, assertions Mr. Moïse denies.

André Michel, 44, a leader of the opposition coalition, the Democratic and Popular Sector, vowed that if the president did not step down, the opposition would stage more protests and engage in civil disobedience.

The opposition hopes to tap into the discontent of the millions of unemployed Haitians — more than 60 percent of the country lives in poverty — to fuel the protests, which in the past have often turned violent and shut down large parts of the country.

Although the president has never been weaker — holed up inside the presidential palace, he is unable to move freely even in the capital — observers say he has a good chance of staying on the job. A weak and feeble opposition is plagued by infighting and cannot agree on how to remove Mr. Moïse from power or whom to replace him with.

The political uncertainty has sowed feelings of dread, with fears that street demonstrations in coming days will turn violent and plunge the country into a long period of unrest.

Zamor, a 57-year-old driver who would give only his middle name because of fears of retribution, said his daughter was snatched off the street in Port-au-Prince, the capital, last month. He now keeps his three children at home and prevents them from attending school.

“People need to have confidence in the state,” Zamor said, adding the government “is filled with kidnappers and gang members.”

Before the kidnapping epidemic, Haitians could listen to music with their neighbors on the street, play dominoes, go to the beach and commiserate with friends and neighbors about their economic despair. But now the fear of being abducted pervades the streets, hindering routine daily activities.

“The regime has delegated power to the bandits,” said Pierre Espérance, 57, a leading human rights activist.

“The country is now gangsterized — what we are living is worse than during the dictatorship,” he said, referring to the brutal autocratic rule of the Duvalier family that lasted nearly 30 years, until 1986.

Haitians suspect that the proliferation of gangs over the last two years has been supported by Mr. Moïse to stifle any dissent. At first, the gangs targeted opposition neighborhoods and attacked protests demanding better living conditions. But the gangs may have grown too big to be tamed and now seem to operate everywhere.

In December, the United States Treasury Department imposed sanctions on Mr. Moïse’s close allies — including the former director general of the interior ministry — for providing political protection and weapons to gangs that targeted opposition areas.

The sanctions highlighted a five-day attack last May that terrorized neighborhoods in Port-au-Prince. The Treasury Department said that gang members, with the cover and support of government officials, raped women and set houses on fire.

The government denies providing support to any gangs.

Tourism has ground to a halt, and the vast Haitian diaspora in the United States and elsewhere is staying away from the country.

“Things have gotten more and more difficult since the arrival of Jovenel Moïse,” said Marvens Pierre, 28, a craftsman trying to sell souvenirs in a public square in the capital.

He had entrusted his two young children to his mother because she was receiving remittances from abroad and could afford to feed them. He said he was finding it difficult to sell his products.

“I can easily spend two weeks without being able to sell my stuff,” Mr. Pierre lamented. “This morning I had to ask a neighbor for her soap to bathe.”