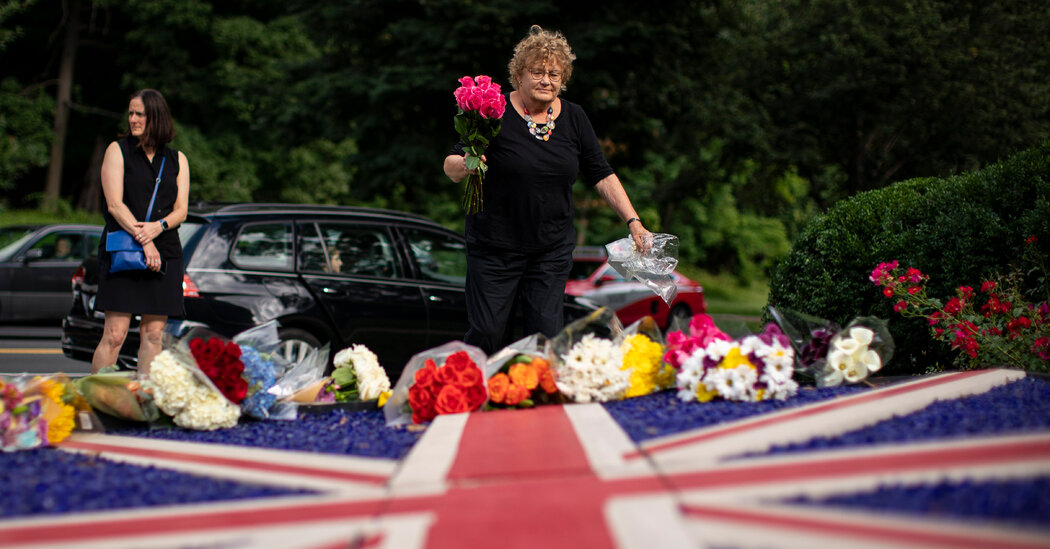 She had the longest reign of any royal in British history, more than 70 years, and most of the world’s populace now alive has known no other British monarch than Queen Elizabeth II. So the reaction to her death was both global and personal.

Often, with the death of a prominent figure, the world may sigh and quickly move on. But the reaction on Thursday felt different, more heartfelt and, at times, intense — including blunt anti-monarchist strains that pierced the outpouring of grief flowing on social media and in news broadcasts around the world.

“I feel like we were unprepared for it because everyone was saying she’d outlive us all,” said William Sawtell, 28, a student of music production in England. “You see her face everywhere. She’s in everyone’s pocket, and now we’re going to have kings for generations and generations.”

Many of the official reactions of leaders read as prepackaged sentiment prepared long ago and then brushed up, like so many obituaries. But some seemed genuine, as if a profoundly important constant in life had suddenly vanished.

Emmanuel Macron, the president of France, said that the queen had embodied the “continuity and unity” of the British nation for more than 70 years. “I remember her as a friend of France, a kindhearted queen who has left a lasting impression on her country and her century,” he wrote on Twitter.

William Ruto, Kenya’s president-elect, also said, “We will miss the cordial ties she enjoyed with Kenya and may her memories continue to inspire us.” He described her leadership of the Commonwealth — those countries and territories once ruled by the British Empire — as “admirable,” even as it has shrank in size and importance.

But the South African political party the Economic Freedom Fighters said in a statement that it would not mourn the queen because “to us her death is a reminder of a very tragic period in this country and Africa’s history.”

During her long reign, it added, “she never once acknowledged the atrocities her family inflicted on native people that Britain invaded across the world.”

Elizabeth was a steady presence in the lives of millions far beyond Britain, a model of discretion and service. She came to the throne at age 25, just after World War II, and her death, as Europe is once again facing war and aggression, arguably marks the end of a long complacency about fundamental security.

The first Queen Elizabeth gave her name to an age, as did Victoria, in an ever more powerful kingdom. But that will not be the legacy of this Elizabeth, who reigned over Britain’s long transition from empire to Commonwealth, from world power to relative international insignificance.

This queen may have been the head of state, but as she once noted, “I cannot lead you into battle, I do not give you laws or administer justice, but I can do something else. I can give you my heart.”

A historic visit. On May 18, 1965, Elizabeth arrived in Bonn on the first state visit by a British monarch to Germany in more than 50 years. The trip formally sealed the reconciliation between the two nations following the world wars.

First grandchild. In 1977, the queen stepped into the role of grandmother for the first time, after Princess Anne gave birth to a son, Peter. Elizabeth’s four children have given her a total of eight grandchildren, who have been followed by several great-grandchildren.

Princess Diana’s death. In a rare televised broadcast ahead of Diana’s funeral in 1997, Queen Elizabeth remembered the Princess of Wales, who died in a car crash in Paris at age 36, as “an exceptional and gifted human being.”

A trip to Ireland. In May 2011, the queen visited the Irish Republic, whose troubled relationship with the British monarchy spanned centuries. The trip, infused with powerful symbols of reconciliation, is considered one of the most politically freighted trips of Elizabeth’s reign.

Breaking a record. As of 5:30 p.m. British time on Sept. 9, 2015, Elizabeth II became Britain’s longest-reigning monarch, surpassing Queen Victoria, her great-great-grandmother. Elizabeth was 89 at the time, and had ruled for 23,226 days, 16 hours and about 30 minutes.

Marking 70 years of marriage. On Nov. 20, 2017, the queen and Prince Philip celebrated their 70th anniversary, becoming the longest-married couple in royal history. The two wed in 1947, as the country and the world was still reeling from the atrocities of World War II.

The historian David Cannadine once said that Queen Elizabeth II’s legacy would feature both transition and decline — the change of British society into “a much more fluid, multicultural, more secular society,” and “the downsizing of the British Empire into the British Commonwealth, the downsizing of Britain as a great power.”

She provided continuity, and in many ways the problems of her family — like the scandals surrounding her son Prince Andrew and the royal family’s public rupture with her grandson Harry and his wife, Meghan — brought her closer to her people. She was revered as a symbol of national unity through good times and bad, and people around the world followed the lives and loves and divorces and travails of her large family as if it were their own.

President Biden and his wife, Jill, recalled her as “the first British monarch to whom people all around the world could feel a personal and immediate connection — whether they heard her on the radio as a young princess speaking to the children of the United Kingdom, or gathered around their televisions for her coronation, or watched her final Christmas speech or her Platinum Jubilee on their phones.”

The queen, Mr. Biden said, “stood in solidarity with the United States during our darkest days after 9/11, when she poignantly reminded us that ‘grief is the price we pay for love.’”

The Bidens also promised American solidarity with the new king, Charles III. And Mr. Biden ordered the American flag to be flown at half-staff until the day of the queen’s burial.

Former President Barack Obama and his wife, Michelle, remembered their early shyness around her.

“She welcomed us to the world stage with open arms and extraordinary generosity,” they said. “Time and again, we were struck by her warmth, the way she put people at ease, and how she brought her considerable humor and charm to moments of great pomp and circumstance.”

During her reign, Queen Elizabeth II dealt with almost as many American presidents, 14, as British prime ministers, 15. And she showed them grace, even as Charles snubbed former President Donald J. Trump by refusing to meet him when the American leader visited Britain in 2018.

At news of the death, Mr. Trump, who was criticized for breaking royal etiquette by walking ahead of the queen during the same 2018 visit, wrote on his social media platform, “Melania and I are deeply saddened to learn of the loss of Her Majesty Queen Elizabeth II.” He added: “Queen Elizabeth’s historic and remarkable reign left a tremendous legacy of peace and prosperity for Great Britain.”

He also said that Charles would be a “Great and Wonderful King.”

Olaf Scholz, the German chancellor, praised the queen’s work to overcome the deep bitterness of World War II. “Her commitment to German-British reconciliation after the horrors of World War II will remain unforgotten,” he said. “She will be missed, not least her wonderful humor.”

And President Vladimir V. Putin of Russia, blamed for launching Europe’s largest land war since World War II, addressed his own message to King Charles III: “I wish you courage and perseverance in the face of this heavy, irreparable loss.”

The queen died days after greeting Britain’s newest prime minister, Liz Truss — the first she met was Winston Churchill. It was an indication of her longevity but also of the difficult period in British life that has followed the turmoil of the divisive Brexit campaign to leave the European Union.

For some Britons — those battered by the high cost of living and skyrocketing energy costs, and others with more conflicted views on the monarchy — news of the queen’s death opened a tense divide.

“The royals seem to be adored by so many, and at times like this I find it a bit frustrating when so many are suffering and those in power don’t appear to care about that,” said Mo Varley, a teacher in Sheffield, England.

She added, “I don’t think you can have a family paid for by the state be free of scrutiny.”

At a sweet shop in East London, customers drinking milk tea joined the shop’s owner, Ahmed Arif, in front of a huge TV screen tuned on the BBC.

“I am going to miss her,” said Mr. Arif, who is of British and Bangladeshi heritage. “She looked like my grandmother.”

When an Indian customer piped up to say that the British monarchs had unleashed chaos in her country, a debate broke out. Mr. Arif said that while some of his ancestors had done bad things abroad, Queen Elizabeth did not.

Julie Begum, also of British and Bangladeshi heritage, said of the queen, “She benefited from historical privileges like the empire, but there won’t be another monarch who has the same respect as she did.”

She then added of the monarchy, “They should just stop it now; we should be a republic.”

Other royals and world leaders expressed sorrow at the loss.

King Philippe and Queen Mathilde of Belgium said, “We will always keep fond memories of this great Lady who, throughout her reign, showed dignity, courage and devotion.”

And Pope Francis said that even as he mourned the queen, he was praying for the new king.

Few of the official statements, however, could match the sincerity of ordinary Britons.

“For many of us, 70 years on, Her Majesty also represented a living link to generations past — to our parents, our grandparents, to all those who came before, to the myths and memories of our national community,” said Matthew Goodwin, a British political scientist.

He added, “We feel such loss because Her Majesty was us.”

Rita Grant, 64, a worker at a children’s center in London, said that even with the difficult situation Britain was going through, she believed that the queen had been the only element keeping the country afloat.

“She is the glue that holds everything together,” she said. “Without her, we will be lost.”