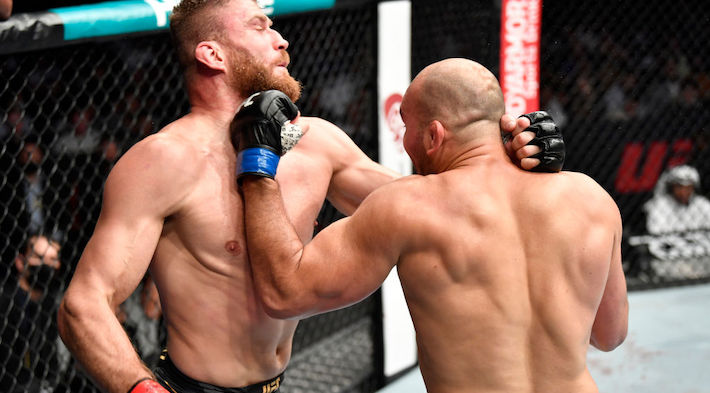 At 42 years old, Glover Teixeira’s Cinderella run isn’t quite over yet. Teixeira (33-7) claimed UFC gold with a second-round submission over Jan Blachowicz (28-9) to win the UFC light heavyweight championship at UFC 267 from Fight Island in Abu Dhabi.

In the first, Teixeira ate a few stiff shots from Blachowicz, but he earned an early takedown and held position through the end of the round. In the second, Blachowicz stuffed two takedown attempts from Teixeira and looked to be gaining momentum. But late in the round, Teixeira hurt Blachowicz with a big hook and then locked in a rear-naked choke after flattening the champion to earn the submission.

Teixeira became the second-oldest champion in UFC history, making it six wins in a row for the veteran. Teixeira’s last three wins have been some of the most notable of his career — over two former title contenders in dominating fashion with a knockout victory over Anthony Smith and a submission over Thiago Santos, and a submission over the champion. Blachowicz himself was coming off a notable five-fight run, one that included wins over Luke Rockhold and Dominick Reyes. He also handed Israel Adesanya his first professional loss.

After the win, Teixeira gave no hints that retirement is in his sights with full anticipation to defend the belt.