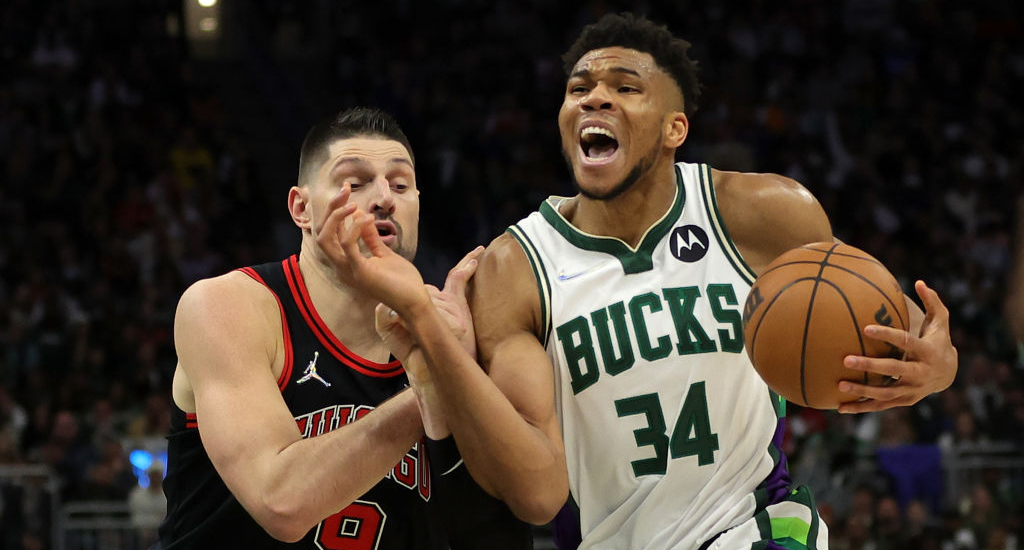 When the Milwaukee Bucks took a 32-16 lead late in the first quarter on Sunday night, it looked for all the world like the reigning champs were going to run the Chicago Bulls out of the building in the first game of their title defense. However, the Bulls showed the grit and resiliency that got them to the playoffs this year despite a bevy of injuries, and clawed their way all the way back into the game, even taking the lead on a few occasions in the second half, dragging the Bucks into the mud in what was a throwback to early 2000’s Eastern Conference playoff basketball.

Ultimately, Giannis Antetokounmpo and the champs were too much to handle for Chicago, with the two-time MVP leading the way with 27 points and 16 rebounds on the way to an ugly 93-86 win — but the Bucks will happily tell you they all count the same.

Early on, the Bucks size was overwhelming the Bulls, as Giannis and Brook Lopez got loose to start, pouring it on in a 9-0 run to start and eventually taking a 16-point advantage in the first quarter.

However, to the Bulls credit, they weathered the early storm and kept themselves attached in the first half, trailing by just eight at the break thanks to some big shots by Zach LaVine.

Nikola Vucevic also stepped up to give them a much needed interior presence against Milwaukee’s bigs, scoring 24 points and pulling down 17 rebounds on the night.

In the third quarter, the Bulls had their best spurt of the game, going on a 13-0 run to erase the Bucks’ lead and take a three-point advantage of their own on a Coby White three, as he gave them a jolt with 12 points off the bench.

From that point, the two teams would trade blows and leads, and neither offense could really get going in the fourth quarter, making for some real tension down the stretch. Giannis found himself in foul trouble, picking up his fifth in the fourth quarter and for a brief stretch in the closing minutes, he was on the bench when Mike Budenholzer made the bizarre decision to try and go offense-defense with his star to keep him from fouling out, but ended up trapping him on the bench during an important stretch — but got away with it.

The championship experience of the Bucks showed itself in their late game composure, as Jrue Holiday and Lopez each had some big shots and finishes to push Milwaukee to a fairly comfortable lead down the stretch.

Lopez finished the night with 18 points and five boards, once again showing his value to this Bucks team on both ends, while Holiday and Khris Middleton mostly struggled with their shot, combining for 25 points on 10-of-29 shooting. Still, they did enough to get the win, particularly on the defensive end where they kept the Bulls’ stars from having consistent success, as LaVine and DeMar DeRozan each had 18 points but needed 44 combined shots to get there.

The Bulls will try to take some positives away from the way they battled and how they held up defensively against the Bucks, but they’ll need LaVine and DeRozan to find a way to get loose if they’re going to be able to make this a series going back to Chicago.