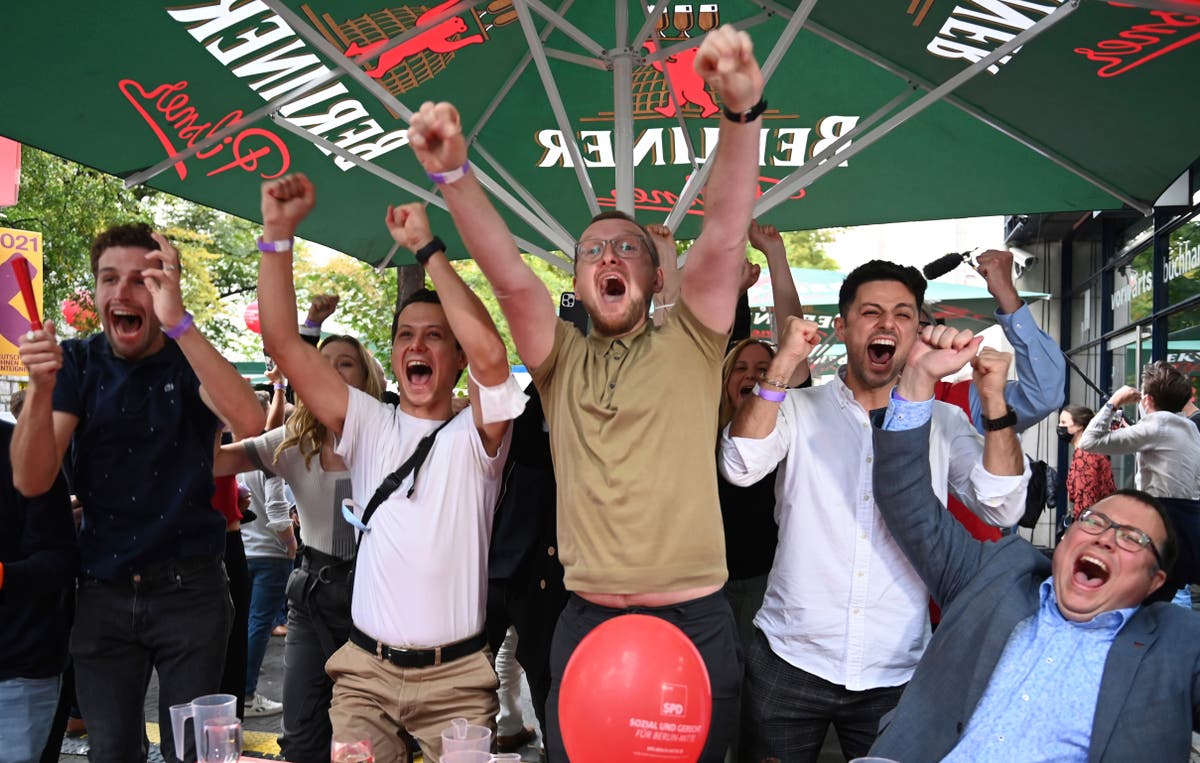 Swinging to the left for the first time in a generation, Germany elected a new parliament on Sunday that is poised to select a centre-left chancellor to succeed Angela Merkel as leader of Europe’s most dominant and prosperous nation.

The social democratic SPD, led by colourless finance minister Olaf Scholz, surged from third to first place over the final weeks of a forgettable, cautious campaign.

It looks to have emerged as the largest party in the new parliament, ending a streak of federal election defeats stretching back to 2005.

It is projected to have gained 25.9 per cent of the vote, against 24.5 per cent for the conservative Christian Democrats (CDU/CSU) according to an exit poll by public broadcaster ZDF. Rival network ARD put the parties even closer. But even if the conservatives finish level with the SPD, they have fewer paths to power because their preferred coalition partners, the Free Democrats, look to have finished a distant fourth.

“This is a great victory,” Scholz said. “The voters have made a clear decision and we’re ahead. We’ll wait for the final results and then get right to work.”

The SPD, which has suffered badly as Ms Merkel’s junior partner in a loveless coalition for the past eight years, has vowed to break away and try to form a coalition with two smaller parties. This would give post-war Germany its first three-party coalition, although the presence of at least one unwanted bedfellow has given rise to concerns over the stability and longevity of such an alliance.

Ms Merkel’s CDU, meanwhile, looks to have suffered its worst ever defeat, falling to second place and ignominiously out of power for the first time in 19 years, with 24 per cent of the vote, down from 32.9 per cent in the last election four years ago. Its gaffe-prone candidate Armin Laschet, the uncharismatic state premier of North Rhine-Westphalia, squandered a promising early lead in the polls with a series of embarrassing blunders that attracted considerable attention, in an otherwise unspectacular election campaign that saw candidates debate various first-world problems.

In a race that was his to lose, given his party has ruled Germany for 52 of the last 72 years, Mr Laschet’s amateurish errors ranged from getting caught on camera giggling while German president Frank-Walter Steinmeier delivered a solemn tribute to victims of deadly floods, to even fumbling the simple act of voting on Sunday as he failed to properly fold his ballot – allowing both polling station workers and photographers to see that he had voted for himself.

“We can’t be happy with these results,” said Laschet, who nevertheless hinted in post-election interviews that he would still be trying to put together a right-of-centre coalition of his own. “But we knew going in that without having the incumbent bonus this time it would be an open, hard and close race.”

The Greens, who peaked early and even held a slim lead over the conservatives for about a month in late April and early July, look to have ended up with 15 per cent – a disappointing outcome after an undulating campaign that was dominated by their signature issue, the climate crisis. This is down a surprising 10 points from their earlier peak, which crumbled due to minor discrepancies in candidate Annalena Baerbock’s CV. It is nevertheless nearly double the 8.9 per cent they won in 2017, and should be enough to help the party form a coalition with the SPD – with a third partner yet to be decided.

Mr Scholz will have little trouble getting the Greens to join his centre-left coalition, after the two parties made it clear in the latter stages of the campaign that they wanted to renew their “red-green” coalition from 1998 to 2005. But with only 40 per cent of the vote, the SPD and Greens will need a third partner, and that’s where things will get tricky.

Their preference would be to ally with the pro-business Free Democrats (FDP), who are projected to finish in fourth place with 13 per cent and are eager to get back into power after spending the past eight years in opposition. As much as the FDP would prefer to rule together with the CDU, there appears to be no path to power on the conservative side, as the two parties together have just 37 per cent.

So the most likely outcome is that the SPD (party colour red), Greens (green) and FDP (yellow) will hammer out a so-called “traffic light” coalition over the next four to eight weeks. If the FDP demands too much, or balks at the expected tax-increase proposals from the two left-leaning parties, the SPD and Greens could in theory turn to the far-left Linke party, which is projected to finish in sixth place with just 5 per cent of the vote. But both parties have expressed doubts about a so-called “red-red-green” coalition with a party that traces its origins to the Communist SED party and has called for Nato to be disbanded.

Support for the far-right Alternative for Germany party fell to 10 per cent on Sunday, according to exit polls, down from 13.3 per cent four years ago.

Ms Merkel stays on in a caretaker role until a successor is sworn in.