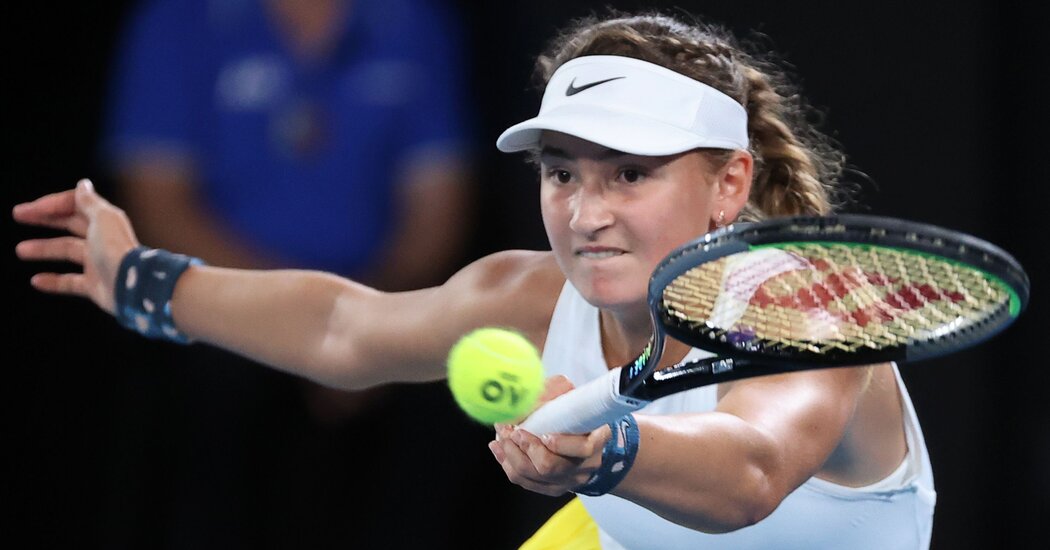 At Wimbledon in 2016, Chris Fowler dragged his ESPN broadcasting partner Brad Gilbert to the semifinals of the boys’ Junior Championships. They were treated to a preview of two future stars: Stefanos Tsitsipas and Denis Shapovalov, who won the tournament.

“I couldn’t believe the level of play,” Gilbert recalled.

That event looked like a snapshot of things to come. Shapovalov defeated Alex de Minaur in the finals; de Minaur beat Felix Auger-Aliassime in the quarters. All three have since broken into the ATP Top 20, while Tsitsipas reached the Top five.

Yet Gilbert was initially unenthused about watching because it easily could have been a replay of the 2014 Junior Wimbledon finals when Noah Rubin beat Stefan Kozlov before both vanished into the lower rungs of the ATP Tour.

At Wimbledon this year, 64 boys and 64 girls will be competing in main draw singles. Victoria Jimenez Kasintseva, who won the girls’ singles title at the 2020 Australian Open, is still competing as a junior and will be at Wimbledon, as will the most recent Boys’ French Open champion, Luca van Assche.

Winning a Junior Slam is obviously a meaningful triumph, but that does not mean it is a barometer of future success. Roger Federer and Andy Murray won Junior Slams, but Rafael Nadal showed that you can go from boy to man while barely playing in the ITF Juniors. Venus and Serena Williams, along with the recent champions Angelique Kerber and Naomi Osaka, also skipped playing in the Juniors circuit.

“A good junior career is a good start, but never a guarantee,” Stan Wawrinka, winner of the 2003 Junior French Open, wrote in an email interview. “I never even dreamed of winning a Grand Slam until I eventually did at the 2014 Australian Open,” his first of three.

Jeff McFarland, creator of the Hidden Game of Tennis website, said that Wawrinka was smart to keep his dreams modest. Winning a Junior Slam is less predictive than being a top pick from college football or basketball.

“Tennis has such an unstructured development system, so it’s hard to say what these wins might indicate,” McFarland said, adding that the physicality of the modern game makes it difficult to know how players will evolve when their bodies have yet to fully develop. “They may be the cream of the crop in the Juniors, but at the next level everybody is that good.”

The boys’ side peaked from 1998 to 2005, with Federer, Murray, Wawrinka, Andy Roddick, Marin Cilic and the Top 10 players Jo-Wilfried Tsonga and Gael Monfils. The next eight years produced Dominic Thiem, who won

Advertisement
the United States Open last year, but otherwise it was a meager crop, But since 2014, a new generation has emerged: Alexander Zverev, Andrey Rublev, Taylor Fritz and those stars of that 2016 Wimbledon tournament.

McFarland said a successful pro career needed not include a Grand Slam — especially on the men’s side, where Nadal, Novak Djokovic, Federer, Murray and Wawrinka have won all but four titles since 2004 — or even cracking the Top 10. The Junior Slam winners Leander Paes and Jack Sock foundered on the ATP Tour but won multiple Grand Slams in doubles, while Richard Gasquet, “who the average American fan never heard of, has nearly $20 million in prize money,” McFarland said. “No one would call those careers a failure.”

“Honestly, winning a Junior Slam doesn’t give you as much help as you might think,” said Elina Svitolina, the 2010 Junior French Open champion, who had reached No. 3 on the WTA Tour. “That’s only the beginning — you have to work so many hours on and off the court to not have the Junior mentality anymore, because when you start to play the women’s circuit it’s completely different.”

“The pro tour is a completely different level,” Wawrinka said, “but traveling on the Junior tour helps you get used to the travel routine at a young age — the jet lag, different food and being away from home is not always easy for juniors.”

Sofia Kenin, a Junior U.S. Open finalist, said having soaked up “the vibe and atmosphere” at the Grand Slams as a junior helped prepare her mentally when she won last year’s Australian Open and reached the finals of the French Open.

One issue that McFarland and Gilbert raise about the Juniors as a predictor is that many top young players opt instead for low-level pro tournaments, either because they want the challenge or for economic reasons.

“It’s more of a commitment to build your junior ranking — the international travel can cost as much or more than the pro tour,” Gilbert said. Winning the Australian Junior Open, he said, is less predictive than the other three majors perhaps because it requires more travel for American and European players.

The result, McFarland said, is that the winners “may not be facing the best talent.” Indeed, of Svitolina’s six opponents en route to her Junior Slam win, only two later broke into the WTA’s Top 150.

Gilbert said that ideally the winners of the Junior Slams should be granted a wild card into the main draw of that Grand Slam the next year.

“This would give young players the incentive to play in the Junior Slams and bring more talent back,” he said.