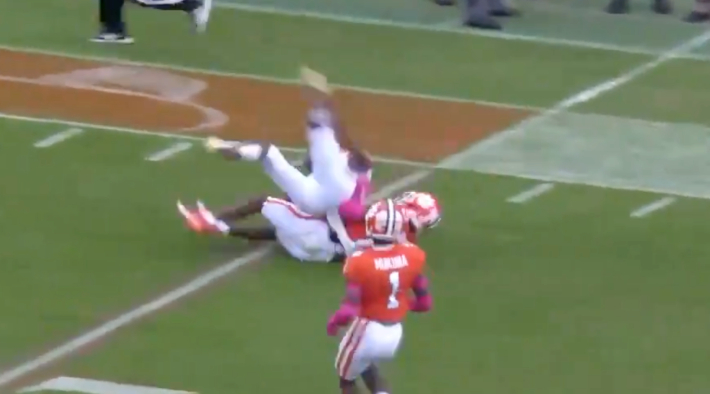 One of the first bits of advice you learn when you’re a pop warner football player is to play through the whistle. There are times when that ends poorly — namely when a dude gets a little too overzealous and gives the other team 15 yards as a result — but this is decidedly not one of those times.

During the second quarter of the team’s game against Clemson, Florida State signal caller Jordan Travis dropped back and found his running back, Lawrance Toafili, on a wheel route. Normally this is enough to get college football fans excited — who doesn’t love a good wheel route? — but Toafili had acres of space ahead of him and took off.

It looked like he was going to get taken down deep in Tigers territory and set the Noles up for at least three points on the possession. But somehow, instead of getting tackled, Toafili rolled on the defender without a single body part that would rule him down hitting the ground. A few yards later and he was in the end zone giving Florida State the lead.

This was the first receiving touchdown of Toafili’s career, and it is certainly not a bad way to open his account.