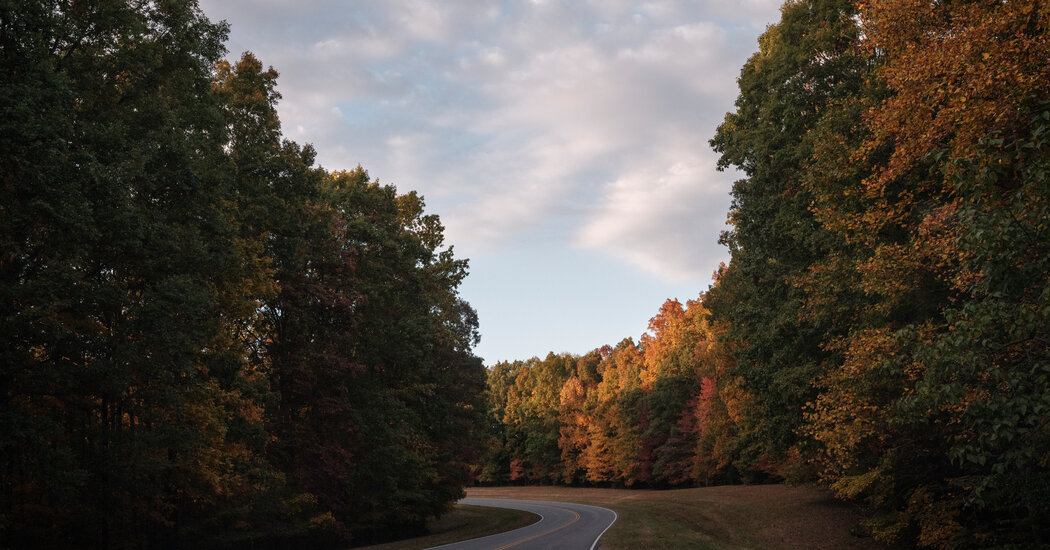 The rain soon stopped and I pulled over to open the sunroof just as my iPhone’s shuffle setting landed on Patty Griffin singing “Heavenly Day.” The newly showered flora was aromatic and, mid-afternoon on a Tuesday, there was not another car for miles.

Roughly 30 miles north of Tupelo, I approached the Pharr Mounds at mile marker 286.7: eight gently sloping burial mounds built by Indigenous people some 2,000 to 1,800 years ago, according to the park service.

Spread over 90 acres, the mounds are one of the largest Middle Woodland sites in the southeastern United States. Four mounds were excavated in 1966 by the park service. Cremated and unburned human remains were found, along with artifacts from as far south as the Gulf of Mexico and as far north as the Great Lakes, which meant they had been imported through trade networks.

It was now 5:30 p.m. and dusk was bringing out wildlife. A Cooper’s hawk made a wide slow arc overhead. It’s not unusual to see foxes, coyotes and armadillos near the parkway. There have been black bear sightings, though they are rare.

As daylight gave way to nightfall, I entered Tupelo, Miss., home of the annual Tupelo Elvis Festival, held each June.

A room in Tupelo’s Comfort Suites for $132 a night fit both my budget and my needs. But Tupelo has a number of hotels closer to the action in the heart of the city, including the boutique Hotel Tupelo in Tupelo’s revitalized historic downtown district, with its simmering restaurant and bar scene.

The following morning, the skies were blue. I got up early for a trip to the Natchez Trace Parkway Visitor Center just north of town. Once inside the brick building, I was pulled in by a timeline of the old road, which began with images of herd animals and continued on to the significance of the Choctaw, Chickasaw and Natchez peoples, and to the passage’s heyday from the mid-1700s to the early 1800s. Its decline coincided with the introduction of steamboats around 1820. I was surprised to learn that the parkway’s construction, which began in 1938, was only just completed in 2005.

Help! I Was Banned From Lyft and No One Will Tell Me Why.