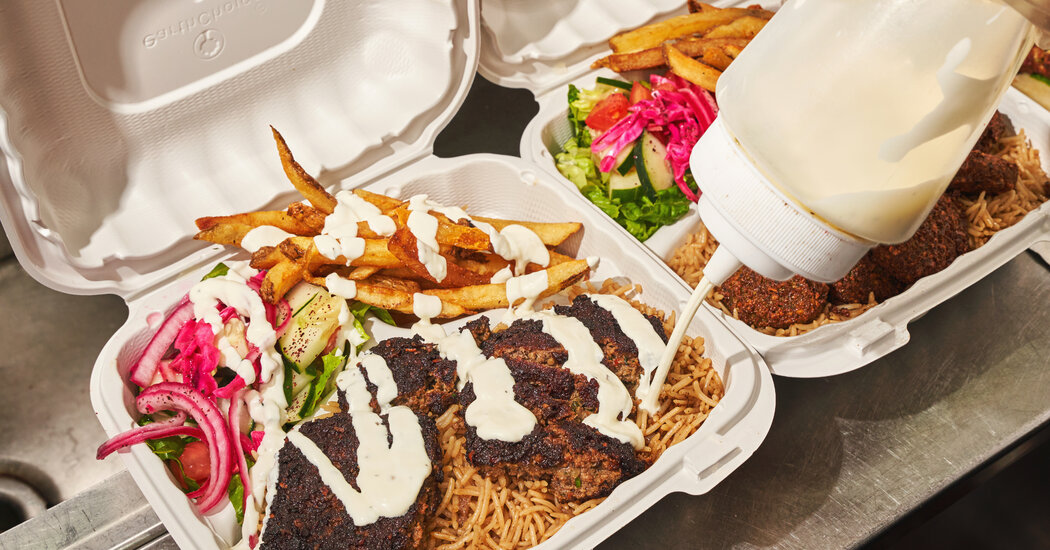 You can go a long way in your life as an eater without questioning the widespread belief that a kebab is grilled meat or fish on a stick. If you are paying attention, you will eventually notice that for some kinds of kebab the stick is optional and for others it is entirely absent. But the grill, whether it is a tandoor, a hibachi, a campfire or a hulking stainless-steel gas-fired backyard monster with Wi-Fi-connected temperature probes, may still strike you as a constant, the common denominator of all kebab equations.

All preconceived notions, though, fall apart instantly upon a single encounter with the chapli kebab. In the vast, far-flung, heterogeneous kingdom of kebabs, the chapli kebab is a platypus. A Pashtun staple, prepared at roadside stands and sit-down restaurants in Afghanistan and Pakistan, it is a hand-shaped meat patty that is neither skewered nor grilled, but fried to a shimmering mahogany in bubbling animal fat or oil. The fat is not used sparingly. One celebrated location in Rashakai, Pakistan, fries its chapli kebab in a pan the size of a kiddie pool.

Oil is the key to spotting Chapli & Chips among the other halal food carts strung out along the sidewalk on Hillside Avenue in northeastern Queens, a few blocks west of the Nassau County line, on the same strip with branches of Apna Bazar, Patel Brothers and Jackson Diner. The chapli are cooked in an enormous cast-iron skillet that is probably big enough to pan-fry a Thanksgiving turkey. Much smaller skillets hang by the eyes in their handles in the window where you will place your order. The business’s logo, displayed on the side of the cart, is shaped like a skillet. The cart itself, almost certainly the only business in New York City specializing in chapli kebabs, is painted skillet black.

Three varieties are sold. The beef chapli is the most traditional, though many Pashtun kebab shops would use lamb. The chicken version is much less conventional. Both kebabs look like latkes that were left on the burner about two minutes too long. Their texture, which is fine-ground and smooth and very slightly, pleasantly breadlike, is something like a burger’s, but a burger that has a hot dog somewhere in its family tree.

Without the flour that holds the patties together, and with a bit more salt, you would have a sausage. But the chapli kebab occupies a territory of its own, complex and elemental at the same time.

The chickpea patty is even less orthodox. A vegan chapli kebab would raise eyebrows in Kandahar. In New York, it is simply the sign of a new food business with hopes to succeed.

Cooked in a skillet of their own, the chickpea kebabs are paler, shorter and more uniformly coin-shaped than the other two. Comparisons to falafel are inevitable and not far off base, but the vegetarian chapli kebab isn’t as crisp or crumbly. It is something like a falafel cake.

All three varieties taste clearly of ground cumin and coriander seeds, with the jab of powdered and crushed red chiles darting in and out. That slight crunchiness comes from pomegranate seeds. Fresh tomatoes, onions, green chiles and cilantro provide a soffritto-like aromatic base, and some extra juices. Trace quantities of other spices hover in the mist, an undefinable but enveloping presence. You feel that you are just on the brink of remembering what it reminds you of when you realize you are going to need another bite.

Once you have selected the main ingredient, the remaining choice is simple: sandwich or platter. It is no slur against the sandwiches, which are very good, to say that the platter gives a clearer view of the details that would set Chapli & Chips apart from other halal carts even if it sold gyros rather than chapli.

Your kebab will be hacked to pieces and strewn over exceptionally long, unclumpy filaments of Pakistani sella rice that are fragrant with cloves and cinnamon. The chopped cucumbers, tomatoes, onions and red cabbage will be dressed at the last minute with a spritz of fresh lemon juice. Around this will be strips of unusually thin and tender bread — a tortilla made for wraps, in fact.

The bread is useful for soaking up the sauces, of which there are about a dozen. All but one or two are whipped up by Chapli & Chips’s owner and chef, Karim Khan. This being a New York City halal cart, there must be white sauce and hot sauce. Both stand out, but the hot sauce is a potent, smoky, rust-colored astonishment. To lower the temperature a bit, a third sauce, fresh and cooling, somewhere in the neighborhood of coriander-mint chutney, is usually applied with the other two.

Mr. Khan will tell you that his chapli kebabs blend flavors from both sides of the Khyber Pass. His family is originally from Kandahar, but his parents fled to Pakistan when the Soviets invaded in 1979, two years before he was born. The family moved to Queens when he was 8, and he got mixed up with the restaurant business not long after, when he began handing out fliers for a pizzeria in exchange for $5 and a slice. He has worked for a large catering hall and a halal chicken-and-rice cart owned by his brother.

After he decided that New York might have an opening for a chapli-focused food cart, he began with his mother’s recipe, an Afghan version, and later modified it with guidance from a friend, a Pakistani-American chef. The pandemic gave him extra time to hone his formula before finally securing his cart’s spot on Hillside Avenue, in front of a brick bank building with a cupola and a Palladian portico borrowed from Monticello.

Still, Mr. Khan does things at Chapli & Chips that would occur only to a kid who was raised in the United States. There is that burrito wrap in which the sandwiches are rolled. One of the sauces kept in squeeze bottles is ketchup and another is kayo, a pink ketchup-mayo blend. I suppose you could put it on a chapli kebab, but it is better saved for the French fries.

Those fries can vary. They may be golden and hard-edged one day, pale and slightly floppy on another. But they are, without a doubt, the only fries in town that are cut to order by forcing a russet potato through a hand-operated press mounted to the wall of a chapli kebab cart.