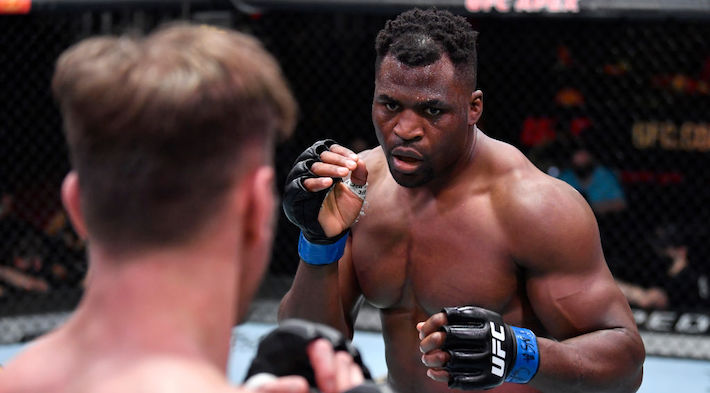 Francis Ngannou (16-3) knocked out Stipe Miocic (20-4) to claim the UFC heavyweight title from the UFC Apex in Las Vegas at UFC 260.

Compared to the first time they faced off, a significantly more patient Ngannou opened the first round with a deep leg kick, tracking the champ around the Octagon and looking for his openings. Ngannou landed a huge right hand behind Miocic’s ear, but the champ took it clean.

Miocic went for a takedown and Ngannou stuffed it. The contender defended it, jumped on Miocic’s back and dropped bombs. Back on their feet, Ngannou landed a big head kick, but was able to take it clean. Miocic connected on a slew of low calf kicks, but Ngannou kept his measured pace.

Miocic attempted to push the pace to open the second round, but Ngannou lit the champ up and put him to sleep to earn the win.

After closing out his trilogy with Daniel Cormier back in August, Miocic turned his attention to a slew of potential opponents ranging from Ngannou to former light heavyweight champion Jon Jones. But in the end, it was Ngannou’s stellar run that earned the contender another shot at UFC gold.

After dropping his first title shot to Miocic in what was a career-altering loss in 2018, it was fair to question the future for Ngannou. Miocic outworked Ngannou, using precise strikes and a heavy ground game to frustrate the rising star in their first bout. He stumbled through a decision loss to Derrick Lewis and had clearly lost his confidence. After that, Ngannou went on a tear, needing less than two minutes to knock out each of his last four opponents before his showdown with Miocic.

Up next for Ngannou is likely a showdown with Jon Jones as the former light heavyweight champ makes his jump to the heavyweight division, something that Jones seemed to cryptically mention in a tweet after the fight.

Don’t rule out a return bout with Miocic though. Regardless of who the next opponent is, the division is on notice with a new champ at the top.