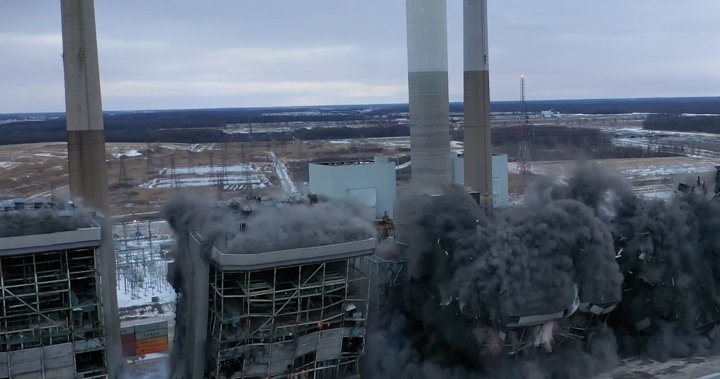 In an email to Global News Saturday morning, OPG said the facility was the last of the crown corporation’s former coal sites.

Video shared by the OPG shows the generating site imploding into a large plume of grey smoke.

Neal Kelly, a spokesperson for OPG, said the generating station opened in 1969.

Lambton GS was safely imploded today. It was part of OPG’s coal closure, which remains one of the world’s single largest climate change actions. We now look to decarbonize the future with our clean hydro, a refurbished Darlington Nuclear and our planned Small Modular Reactor. pic.twitter.com/gSXer23Dvk

“It was a four-unit station — 500 megawatts each unit — so it was a big station,” he said. “It safely produced power for southwestern Ontario for more than 40 years, and it closed as part of our coal closure in 2013.”

According to Kelly, the implosion on Saturday went according to plan.

“At 7:42 (a.m.), the implosion happened, and the stacks and the boilers landed exactly where they were supposed to land,” he said.

Kelly said a large perimeter was blocked off around the site ahead of the implosion, including surrounding roads as well as water traffic on the St. Clair River.

Kelly said the implosion marks the “end of an era.”

“You know, at one time, in the early 2000s, about 25 per cent of Ontario’s electricity was generated by coal,” Kelly explained. “I think everybody knows that coal generation is not good for the environment, and not good for people’s health. So the air is much cleaner today, right? We produce electricity today with much cleaner sources, which is great for everybody.”

Kelly called the implosion at the Lambton Generating Site “bittersweet,” saying thousands of people were employed there over the years.

“They did a really good job of safely operating that plant and providing needed electricity for the people of the province, and we have many retirees living in the St. Clair Township area and the Sarnia area, so it’s bittersweet in that sense,” he said.

“But it’s for a brighter future right? It’s for a cleaner future for all of us,” Kelly continued.

Now, Kelly said the site will be cleaned, the rubble will be removed, and OPG will decide what to do next.

“We’ll make the decision down the road on what we’re going to do,” he said. “And we’ll work closely with the community as we come to that decision.”