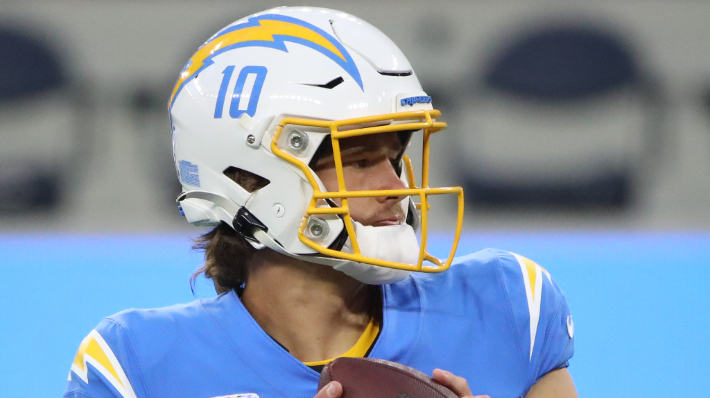 Two intriguing AFC West rivals take the field in Los Angeles for the Week 4 edition of Monday Night Football. The Los Angeles Chargers welcome the undefeated Las Vegas Raiders to SoFi Stadium with real anticipation but, despite a scheduled start time of 8:15 pm ET, kickoff didn’t take place in its typical time slot. In fact, it was delayed for weather and, more specifically, for lightning in Los Angeles.

tonight’s game is currently delayed due to lightning. kickoff time is TBD.

The issue, though, is that SoFi Stadium is a domed venue, meaning that exterior weather wouldn’t normally cause a delay. That left observers quite confused, even as the official kickoff time of 8:55 pm ET was distributed.

What’s going on? Isn’t this spaceship stadium a dome?

Raiders head coach Jon Gruden joined in the confusion, reacting as he was told what was happening just before the game was set to begin.

The jokes were flying, including a play on the presence of Chargers and their trademark lightning bolt logo in this particular setting.

There was seemingly a real reason for the delay, though, as the weather was pretty ugly outside the venue. Given that SoFi Stadium does have open sides, there would be some potential issues for fans in certain areas, even if the field was not affected.

Since people are firing off bits at a truly breathtaking rate: SoFi Stadium has a roof, but the sides are open. (See: yellow circle.) There is lightning in the area, hence the danger. pic.twitter.com/gKNCdkvx8a

All told, it appears as if the only real fallout will be a delay of under an hour, and football is on schedule — ESPN reports the scheduled kick is 8:55 p.m. ET. Still, this is a bizarre situation and, with all of the renewed attention on sports betting in 2021, one could ask what the odds were of an indoor weather delay on Monday night.