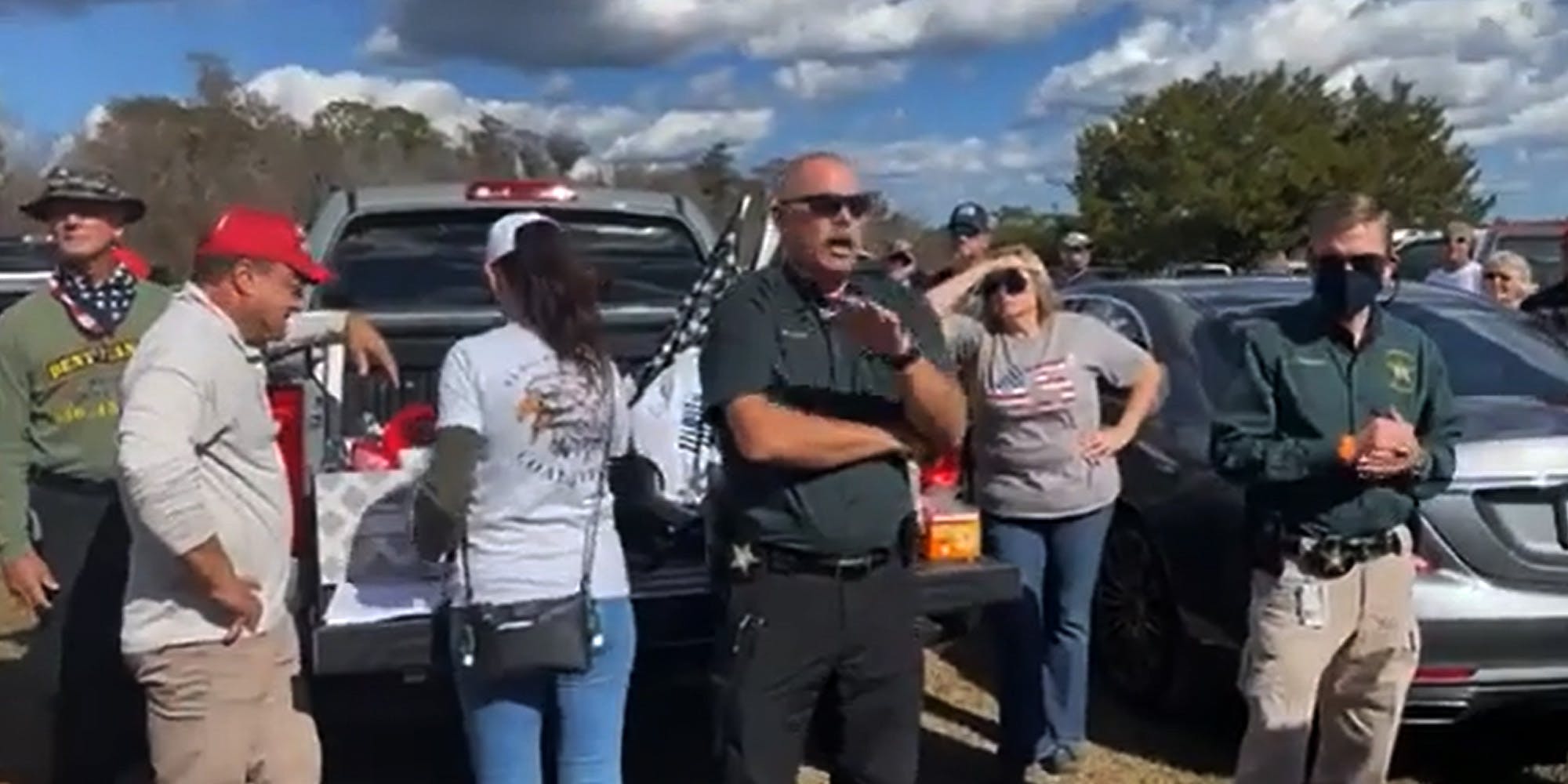 Florida sheriffs, acting under the orders of a local politician, gave a security briefing to an armed right-wing group heading to the U.S. Capitol on Jan. 6,  2021, according to videos obtained by the Daily Dot.

The Flager Liberty Coalition (FLC) recommended its members pack body armor, mace, and knives—which they said were for protection—and were working with Flagler County Commissioner Joe Mullins to bring crowds to D.C. that day. Mullins has faced criticism from his fellow local politicians for attending the protests that turned into the Capitol insurrection.

Together, the group brought three buses of people to Washington on Jan. 6.

The briefing is one of the best publicly available videos illustrating connections in advance of Jan. 6 between right-wing activists, pro-Trump protestors, MAGA politicians, and law enforcement.

Flagler authorities, Mullins, and the FLC did not respond to requests for comment. After the Daily Dot reached out, the FLC deleted all videos off YouTube referenced in this article.

The video of the briefing was first taken by independent journalist Tracey Eaton and reviewed by the Daily Dot.

The briefing is alternatively absurd, banal, and telling. In one moment, a sheriff warns that antifa will be at the Capitol and that “as a weapon, they’re using fire.”

In another, one of the participants asks about going to the Capitol after President Donald Trump’s speech. He is hushed and told that the group would speak about it later.

On the group’s website, however, the intent to go to the Capitol that day was clearly marked, as an itinerary included “walk to the Capitol.”

Yet another claims the government will fry people’s cell phones if they show up.

The briefing occurred on Jan. 5, 2021, when the Homeland Security Division of the Flagler County, Florida Sheriff’s Office met with the FLC and other pro-Trump protestors about to leave for Washington, D.C. They said they were explicitly there on behalf of Mullins, who has been an outspoken supporter of former President Donald Trump.

Throughout the briefing, Mullins stands next to the officers.

Later, Mullins is praised for supporting the trip. Someone notes that he paid for two of the three buses that were going up to D.C. and that he contributed a large donation to make the trip happen.

Mullins said he was in touch with a congressman who would stand with the group in front of the Capitol for support and would be voting against certifying the 2020 election for President Joe Biden.

The briefing was primarily conducted by Flagler County Sheriff’s deputies Mike Lutz and Chris Peterson. It combines conspiracy theories and misinformation, as well as a request that protesters tell “the Donald” the police say hello.

“D.C.’s a dirty city,” Lutz jokes at the onset, noting they have free hand sanitizer to pass out as part of COVID-19 protections.

“District of criminals,” one man responds.

Lutz says that anarchists will attack people if they travel solo, warning them to stay in groups. He adds that if members are confronted with violence, they can defend themselves.

Lutz goes on to say that antifa members will “sucker punch” and “kick you.”

The group the police are addressing, the Flagler Liberty Coalition, began as an anti-mask organization in Florida, though their YouTube channel show members training with firearms—including one video posted just before Jan. 6.

In a related video obtained by the Daily Dot, FLC member Mark Phillips, who organized the trip along with Mullins, tells protestors to bring helmets, body armor, mace, pepper spray, and knives and notes that some members of the group will be in “fight mode.”

The video was filmed prior to Flagler police briefing the group. In advance of the trip to D.C., one of the principals of the group posted on Facebook that “firing squads are the only way to unfuck the Republic.”

The group highlighted their trip to the Capitol with a number of videos of their bus ride.

In a since-deleted video on their YouTube page from the protest, they are seen chanting “Who’s House? OUR HOUSE” on Jan. 6, filming from what they say are the Capitol steps.

“FLC members & guests were at the foot of the steps, caught up in the tear gas, the confusion and the surge pushing them forward. Holding their ground, they reminded everyone just whose House they were visiting while keeping the peace outside,” the caption says.

No one identified as part of the FLC by the Daily Dot has been arrested or charged for any crimes that day.

Some of the people who went would later admit to “trying to take the steps of the Capitol.”

In the briefing, Lutz tells attendees, “Please be polite to law enforcement.” Numerous pro-Trump supporters attacked police on the Capitol steps, as a mob charged up to try and stop the certification of the 2020 election.

The police note that county sheriff Rick Staly couldn’t appear at the briefing, but that he wished he could have.

Last week, the Orlando Sentinel reported Staly is a “constitutional sheriff,” part of an anti-government extremist movement that refuses to enforce laws they believe are unjust, such a gun control legislation.

Peterson, the director of Flagler’s Homeland Security Division, claimed he was looking at “criminal intelligence streams” in advance of the riot,” and found that people could would be posing as Trump supporters, so attendees should be careful who they speak with.

Lutz joked that people who would be pretending to be Trump supporters would “break out in a rash” if they put on MAGA gear.

During the briefing, a pro-Trump supporter claimed that cell phones at a previous protest were “fried” by authorities trying to jam electronics. Lutz told attendees to be careful with having their WiFi and Bluetooth on, although he also notes that cell phones being attacked at pro-Trump rallies is “news” to him.

On Jan. 7, the Flagler Liberty Coalition group returned and were interviewed in a subsequent video, also taken by Eaton. Several people admit to not only attending Trump’s speech, but heading to the Capitol building.

One tells Eaton, “towards the end of [Trump’s] speech, we wanted to make sure we got a good spot at the Capitol … where they were supposed to do the counting of the electoral votes … but then by the time we got to the statehouse we found out that Pence already certified 40 minutes prior … roughly speaking, kind of chaos had broken loose … that’s eventually when we took … started trying to take the steps of the Capitol.”

It’s unclear what the person is specifically referring to, as the certification of the election came later that night, with Pence having been rushed away from Congress. It’s also unknown if any members of the Flagler group entered the Capitol.

While the Flagler Liberty Coalition does not appear to have any ties to more well-known anti-government militias involved in planning the Capitol riot, after Jan. 6 Phillips conducted an interview with the wife of Kenneth Harrelson, one of the Oath Keepers who was arrested and charged with sedition for his role in.

In the interview, Phillips calls the Jan. 6 insurrection a deep state false flag designed to cover up the fact that the 2020 election was stolen.