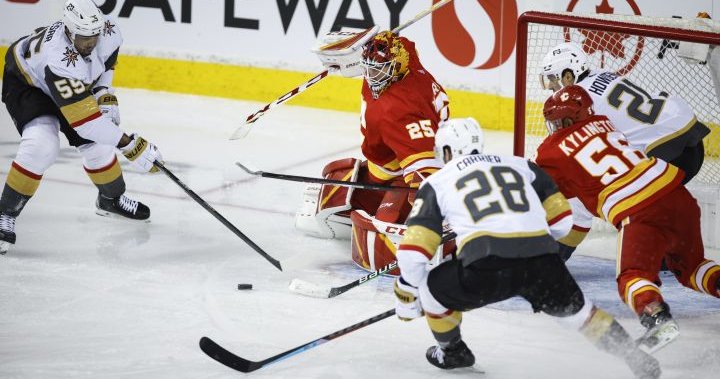 Mikael Backlund had a goal and three assists to pace the offence and Jacob Markstrom made 28 saves to lead the Calgary Flames to a 6-0 victory on Wednesday night over the Vegas Golden Knights.

Andrew Mangiapane — with his team-leading 21st and 22nd goals, Johnny Gaudreau and Elias Lindholm also scored for Calgary (24-13-6), which has won six of their last seven.

Vegas (28-17-3) follows up a 4-0 win in Edmonton on Tuesday by being shut out themselves for the third time on the season and first time since Nov. 2. The Golden Knights, who just had a week off for the all-star break, now have another week off, not returning to action until they host Colorado next Wednesday.

The result makes it four straight wins at the Saddledome for the Flames, who opened up a seven-game homestand that continues Thursday night against Toronto.

It is Markstrom’s league-leading eighth shutout, improving his record to 18-10-5. Nobody else has more than four.

The Flames netminder wasn’t overly busy early, but he was sharp when called upon, especially over the final 40 minutes. In particular, he had Nolan Patrick’s number stopping him three times in the second period and all on good scoring chances.

First he stretched across the crease to stop a redirect from the top of the crease. Right after the ensuing faceoff, he made a glove stop on Patrick from the slot. Then in the final minute of the period, he got a block on Patrick’s backhand after he stripped the puck from Nikita Zadorov and darted in on a breakaway.

After getting Tuesday night off, Robin Lehner took the loss to fall to 19-13-1.

The win moves Calgary to within one point of Los Angeles and Anaheim, who are tied for second in the Pacific Division, although the Flames hold four and five games in hand, respectively. Calgary also climbs to within five points of Vegas, who they also have five games in hand on. By point percentage, the Flames boast the division’s best record.

Calgary opened the scoring at 5:03 on a perfectly executed give-and-go with Gaudreau and Matthew Tkachuk, capped off with Gaudreau going top corner for his 19th goal.

The Flames entered the night 0-for-14 in their previous five games on the power play and while the man advantage wasn’t credited with Calgary’s second goal at 12:24 of the first, it was essentially a power-play goal with Backlund beating Lehner on another wrist shot to the top corner, just four seconds after Brayden McNabb got out of the penalty box.

Calgary jumped in front 3-0 less than three minutes later in a continuation of the trend of picking the top corner, this time Lindholm ripping one past Lehner from 40 feet out.

The Flames extended the lead to 4-0 6:57 into the second period on another pretty set-up, this time Backlund centring the puck to Mangiapane for a one-timer that, again, went to top corner on Lehner.

After Tkachuk’s nifty between-the-legs goal at 3:09 of the third, Calgary wrapped up the scoring on another Backlund to Mangiapane set-up.

Just three of Mangiapane’s 22 goals have come on home ice.