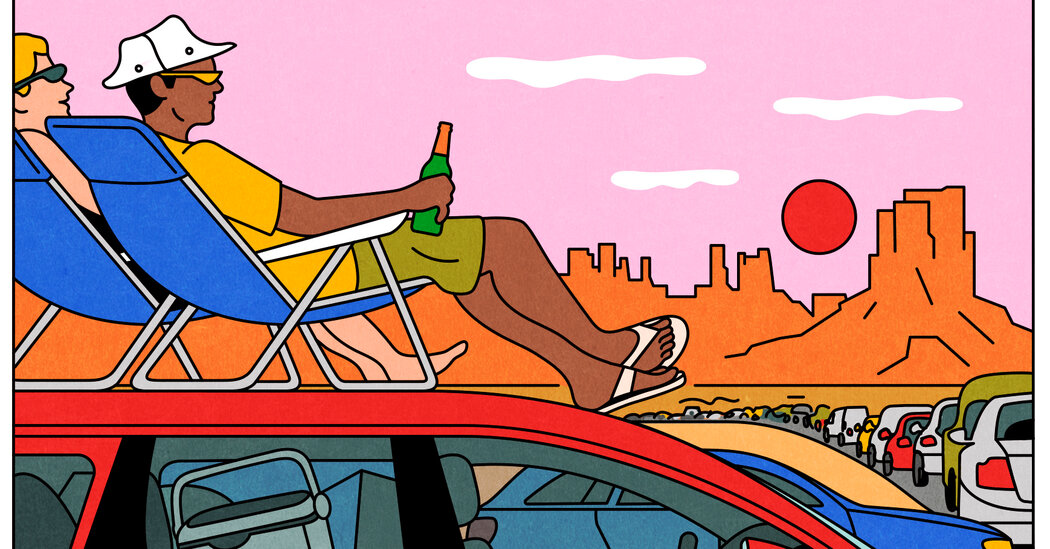 Rising vaccination rates and pent-up demand are expected to speed up travel’s rebound this summer. Despite Europe’s reopening, lingering skittishness about flying, increasing worries about coronavirus variants and testing requirements for overseas travel practically guarantee that the majority of summer vacations by Americans, like last year, will be domestic, and many taken by car.

In addition to tips from the Before Times — get your car serviced, load up on snacks and be open to the possibility of adventure — here are five things to keep in mind if you’re planning a road trip this year.

Stay-at-home orders, virtual schooling and shuttered workplaces kept streets from coast to coast quiet last year. Driving fell by 13.2 percent from 2019 — to its lowest level in two decades — according to numbers released in February by the Federal Highway Administration.

Although many travelers last summer enjoyed the retro appeal of wide-open roads relatively free of crowds, this summer is likely to have distinctly 21st-century levels of traffic. Data from the Metropolitan Transportation Authority, which oversees public transportation in the New York City metropolitan area, shows that traffic at the area’s bridges and tunnels has generally been rising over the last few weeks, with a handful of calendar dates even exceeding their prepandemic equivalents.

In a May estimate, AAA, the automobile owners group, put the number of Memorial Day road-trippers around 34 million, an increase of 52 percent compared to 2020 (though still down by 9 percent compared to 2019). According to the report, nine of 10 travelers planned to drive to their holiday destinations.

Although air traveler numbers are ticking up as well, according to Transportation Security Administration checkpoint numbers, a new survey of more than 1,000 respondents by the tire company Bridgestone Americas shows that more than half of Americans plan to vacation only by car this summer, and that nearly 80 percent feel safer in a car than they do on a plane. From May 1 to mid-June, the social media analytics company Sprout Social tracked more than four times the mentions of road trips compared to flights on Twitter.

2. Crossing state lines will be easier than it was last summer. But don’t toss the masks just yet.

By now, most states have lifted whatever relics remained of the quarantine and testing requirements that were put in place last year. Some, including Alabama, Indiana and Maryland, have no restrictions at all; others, including Oregon and Rhode Island, are still requiring or recommending various levels of quarantine and testing for unvaccinated visitors while exempting those who are at least two weeks beyond their second shot.

3. Rental cars will be hard to come by, so plan ahead and be flexible.

On Kayak, the travel comparison website, May searches for summer car rentals were up 195 percent over May 2019, with outdoorsy cities like Denver and Orlando among the most-searched-for destinations.

Rental cars are scarce: A recent Enterprise.com search for a rental car for the Fourth of July weekend — with a pickup on July 1 and drop-off on July 5 at the Miami International Airport — showed no availability.

Spokeswomen from Enterprise Holdings and Hertz, in similarly written emailed statements, both acknowledged the high demand and limited availability that have earned the pandemic-era nationwide rental car shortage its nickname: “carpocalypse.”

Kayak search data shows that rental cars are also getting more expensive; the average price in May was up 19 percent from April, and up 102 percent over May 2019.

“Domestic demand for car rentals has significantly increased as more travelers become vaccinated and are comfortable planning their next vacations,” said Steve Sintra, Kayak’s vice president and general manager of North America. “If you want to save money, plan to pick up your car on Tuesday, when the average price is about 9 percent cheaper compared to Sunday.”

Mr. Sintra also recommended booking early: “Two months ahead is the ideal time frame to rent a car,” he said. “It may take more planning, but it could save you some money.”

Be flexible with pick-up location — Enterprise has an online feature that redirects users to nearby options when their first choice isn’t available — and book at neighborhood locations, rather than busy airports.

Alternatives to the traditional car-rental model are another way to go. Kyte, a company that delivers professionally maintained and sanitized rental cars to customers’ doors, now has a foothold in several major domestic cities, including New York, Boston and San Francisco. The company launched in Chicago earlier this month and will roll out to Miami, Philadelphia and Seattle in the months to come.

Also this month, the car-sharing company Turo expanded its Commercial Host program, which allows independent licensed and insured rental car companies to be listed on the platform, to New York, making inroads — and expanding consumer options — in a major East Coast market.

4. Research well, book in advance and brace for closures.

Although major museums around the country, including the Metropolitan Museum of Art in New York City and the Los Angeles County Museum of Art, are open, most have capacity limits and are requiring timed tickets. Meanwhile, some classic road-trip sites, including Arizona’s Antelope Canyon — an icon of Instagram tourism before the pandemic — are closed indefinitely.

Covid-safety measures in National Park Service destinations vary by park and will likely continue to change in the coming weeks. Certain shuttle bus routes at the Grand Canyon are not operational, for example; some restaurants at the site are closed and others require advance reservations. At Big Bend National Park, in Texas, would-be campers cannot simply show up: Campground reservations are required. Additionally, some National Park lodges are already sold out for the summer and into fall, according to Xanterra Travel Collection, which operates lodges at Yellowstone, Zion and several others.

The key to navigating these roadblocks? Check the individual websites for your destination — and its attractions and restaurants — for the latest health protocols and information about openings and closures, and make reservations as far as possible in advance. And because timed entry tickets are often linked to QR codes — and because lunchtime sustenance often lives and dies by Yelp — invest in a USB car charger.

5. Prepare for what could be long stretches in the car.

Construction wrapped up on the Bourne Bridge, the gateway to Cape Cod, just in the nick of time for Memorial Day weekend traffic, and after a year when many infrastructure projects were stalled, this summer is certain to bring roadwork that jams up the nation’s highways and byways.

“It was very common for states to put all sorts of projects on hold last summer because of budget uncertainty, not to mention safety precautions,” said Richard Auxier, a senior policy associate at the Urban-Brookings Tax Policy Center. This year, by contrast, Mr. Auxier said, the $1.9 trillion stimulus bill that President Biden signed into law in mid-March, the American Rescue Plan, has allocated funds to state and local governments for transportation and infrastructure investments.

“Now, not only is the economy opening back up, but they have this infusion of federal dollars that will either get them back to where they were before the pandemic or actually let them fund projects they might not have done,” Mr. Auxier said of state transportation departments.

The Federal Highway Administration does not keep a national log of construction projects, and aside from researching planned work on transportation department websites and listening to local news, consumer-facing apps — like Waze and Google Maps, which show real-time traffic and construction — is the best way to keep abreast of what to expect. Long drives and traffic jams also call for ample distractions, so be sure to download the newest audiobooks and podcasts.

Sarah Firshein is a Brooklyn-based writer. She is also our Tripped Up columnist. If you need advice about a best-laid travel plan that went awry, send an email to [email protected].