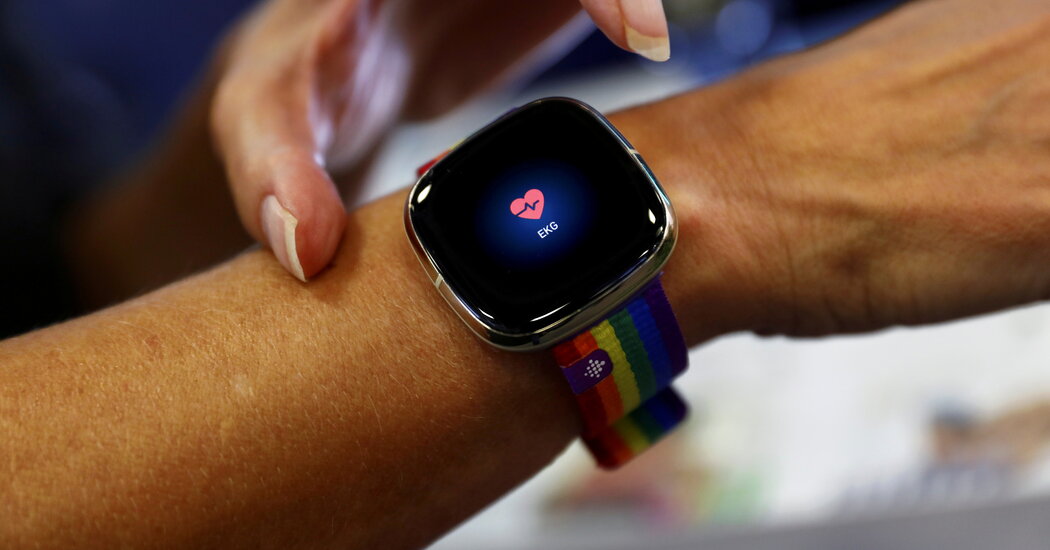 Last spring, when the nation’s Covid-19 cases were soaring and tests were in short supply, some scientists wondered whether a new approach to disease surveillance might be on Americans’ wrists.

One in five Americans uses a Fitbit, Apple Watch or other wearable fitness tracker. And over the past year, several studies have suggested that the devices — which can continually collect data on heart rates, body temperature, physical activity and more — could help detect early signs of Covid-19 symptoms.

Now, research suggests that these wearables can also help track patients’ recovery from the disease, providing insight into its long-term effects.

In a paper published on Wednesday in the journal JAMA Network Open, researchers studying Fitbit data reported that people who tested positive for Covid-19 displayed behavioral and physiological changes, including an elevated heart rate, that could last for weeks or months. These symptoms lasted longer in people with Covid than in those with other respiratory illnesses, the scientists found.

“This was an interesting study, and I think it’s important,” said Dr. Robert Hirten, a gastroenterologist and wearables expert at the Icahn School of Medicine at Mount Sinai who was not involved in the new work. “Wearable devices offer an ability for us to be able to monitor people unobtrusively over long periods of time to see in an objective way — how really has the virus affected them?”

The results are from the Digital Engagement and Tracking for Early Control and Treatment (DETECT) trial run by scientists at the Scripps Research Translational Institute in La Jolla, Calif. From March 25, 2020 to Jan. 24, 2021, more than 37,000 people enrolled in the trial.

Participants downloaded the MyDataHelps research app and agreed to share data from their Fitbit, Apple Watch or other wearable device. They also used the app to report illness symptoms and the results of any Covid-19 tests.

In October, the same researchers reported in Nature Medicine that when they combined wearable data with self-reported symptoms, they could detect Covid-19 cases more accurately than when they analyzed symptoms alone.

But the data, the researchers realized, could also help them track what happened to people after the worst of the illness had passed. People recovering from Covid have reported a wide range of lasting health effects, including fatigue, “brain fog,” shortness of breath, headache, depression, heart palpitations and chest pain. (These lingering effects are often known as long Covid.)

The new study focuses on a subset of 875 Fitbit-wearing participants who reported a fever, cough, body aches or other symptoms of a respiratory illness and were tested for Covid-19. Of those, 234 people tested positive for the disease. The rest were presumed to have other kinds of infections.

Participants in both groups slept more and walked less after they got sick, and their resting heart rates rose. But these changes were more pronounced in people with Covid-19. “There was a much larger change in resting heart rate for individuals who had Covid compared to other viral infections,” said Jennifer Radin, an epidemiologist at Scripps who leads the DETECT trial. “We also have a much more drastic change in steps and sleep.”

The scientists also found that about nine days after participants with Covid first began reporting symptoms, their heart rates dropped. After this dip, which was not observed in those with other illnesses, their heart rates rose again and remained elevated for months. It took 79 days, on average, for their resting heart rates to return to normal, compared with just four days for those in the non-Covid group.

This prolonged heart rate elevation may be a sign that Covid-19 disrupts the autonomic nervous system, which regulates basic physiological processes. The heart palpitations and dizziness reported by many people who are recovering from Covid may be symptoms of this disruption.

“Lots of people who get Covid end up getting autonomic dysfunction and a kind of ongoing inflammation, and this may adversely affect their body’s ability to regulate their pulse,” Dr. Radin said.

Sleep and physical activity levels also returned to baseline more slowly in those with Covid-19 compared to those with other ailments, Dr. Radin and her colleagues found.

The researchers identified a small subset of people with Covid whose heart rates remained more than five beats per minute above normal one to two months after infection. Nearly 14 percent of those with the disease fell into this category, and their heart rates did not return to normal for more than 133 days, on average.

These participants were also significantly more likely to report having had a cough, shortness of breath and body aches during the acute phase of their illness than did other Covid patients.

One limitation of the study is that it did not ask participants to continue reporting their symptoms in the weeks and months after they first fell ill. But the scientists are planning to ask volunteers to do that in future research.

“We want to kind of do a better job of collecting long-term symptoms so we can compare the physiological changes that we’re seeing with symptoms that participants are actually experiencing,” Dr. Radin said. “So this is really a preliminary study that opens up many other studies down the road.”

In February, the National Institutes of Health announced that it would provide $1.15 billion over the next four years to fund research on long Covid. The new study highlights the role that wearables could play in that research, Dr. Hirten said: “Combining these sort of techniques with other studies that are being done looking at this issue of long-term symptoms could really offer a nice objective insight into what’s going on with people.”