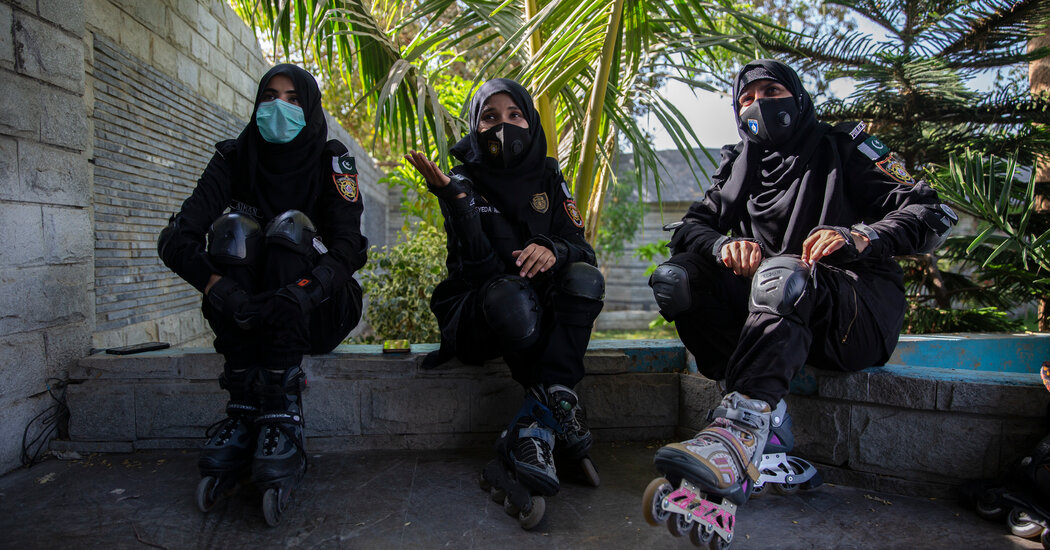 KARACHI, Pakistan — Syeda Aiman has learned to shoot while she skates. She isn’t a hockey player, but an officer on a counterterrorism unit in Pakistan.

The 20-member unit carries out counterterrorism surveillance and community policing on in-line skates. It also has an equal number of male and female officers. Both facts are rarities in this city of at least 15 million, where the roads are crumbling and nearly every institution is male-dominated.

Police officials say the unit, which first appeared in public in December, is a success. Critics call it a gimmick. But most Karachiites can at least agree that it’s been odd to see armed officers skating through their shopping malls.

“It’s a new concept for the public,” Ms. Aiman, 25, said. “When we started skating we were excited, but also nervous about falling. But the fear goes away when you’re in the field.”

To some degree, the unit is a response to a public relations crisis. Police departments in Pakistan are among the country’s “most widely feared, complained against and least trusted government institutions,” the advocacy group Human Rights Watch said in a 2016 report. Pakistan’s prime minister, Imran Khan, rose to power in 2018 in part by promising police reform.

This month, nine police officers were suspended in the eastern city of Lahore after they jailed employees of a restaurant that had refused to give them free burgers. Many people saw that incident as a sign that police corruption was still rampant.

Fear and mistrust of the police run high in Karachi, where several officers have been charged with killing civilians in staged shootouts. In one high-profile example, a police inquiry found two years ago that Karachi officers had killed an aspiring model and three others, then falsely claimed that the victims were militants. The commander in charge of the operation, Rao Anwar, is now on trial for murder.

Maqsood Ahmed, a deputy inspector general with the regional Sindh Police, said the new in-line skating unit was designed in part to address criticism that Karachi police officers didn’t know how to interact with civilians. The sight of officers on skates, he added, has helped to “lighten the mood” in malls and other family-friendly places where they patrol.

But the skating unit isn’t just out to make friends.

Mr. Ahmed said its primary responsibility was counterterrorism surveillance in public areas, including parks and cricket stadiums. He said the in-line commandos had already made arrests, improved the force’s response rate at crime scenes and protected several high-profile officials, including Mr. Khan and President Arif Alvi.

Ms. Aiman, who joined the Sindh Police two years ago, said she had a deep commitment to the counterterrorism wing that her in-line skating unit belongs to. As a girl, she paid close attention to the Pakistani military’s crackdown on insurgents in mountainous tribal areas, and she used to volunteer at a Karachi arms fair.

“I believe that terrorists deserve to die,” she said over breakfast at her apartment. “You have to kill them. They don’t deserve to be alive.”

Cities in Britain, France, the Netherlands and elsewhere have started skating police units over the years, with mixed results. Mudassir Ali, a Sindh Special Security Unit police commando who has trained officers for the skating unit, said that he modeled it on examples from abroad.

Mr. Ali said those on skates typically worked in tandem with officers in patrol cars and that they had been trained to jump and climb stairs in “areas that don’t have the best roads or infrastructure.”

Even though the commandos mostly help to maintain public order in places like malls and popular street food areas, he added, they are armed and ready to shoot criminals if necessary.

Not everyone is impressed.

Jasim Rizvi, a resident of Karachi’s middle-class Gulshan-e-Iqbal neighborhood, said he saw the unit as a publicity stunt.

“Maybe the police had nothing to do so they decided to hop on skates,” said Mr. Rizvi, who was recently mugged outside his home. “I only see the police in action when they’re accompanying so-called V.V.I.P.s.”

Putting officers on skates to improve the police force’s relationship with the community could potentially make sense in Karachi, but not if they are armed, said Zoha Waseem, a research fellow at the Institute for Global City Policing at University College London.

There is little evidence from other cities that in-line skating units help police forces fight crime, she added. Also, Karachi is full of potholes.

“This is why it’s hard to see this initiative as something more than police propaganda,” she said. “We don’t know how sustainable it will be, and I wonder if this budget could have better been spent elsewhere.”

Mr. Ahmed said the unit had another purpose beyond community engagement and crime fighting: empowering women. Many of its 10 female officers are from impoverished rural areas of Sindh Province, he added, and the unit is a “merit-based” outfit created in part to combat entrenched sexism.

“We say that there should be equality between men and women at workplaces, but this is not always possible due to cultural issues,” he said.

Women walking alone in Pakistan draw stares, or worse; sexual harassment is common in workplaces and beyond; and the country has one of the highest gender pay gaps in the world. Mr. Khan, the prime minister, drew a backlash in April for saying that rape cases had risen because of how women dressed.

Ms. Aiman, who grew up in Karachi, said that as she trained for the in-line skating unit, she learned strategies for projecting authority and avoiding situations in which people could try to take advantage of her because of her gender.

In-line skating is trendy in a few of Karachi’s middle-class neighborhoods, but Ms. Aiman did not know what it was until a police colleague explained the activity to her last year.

Her relatives were skeptical about it, she said, and she sustained minor injuries during training sessions. But after about two weeks, she was weaving through crowds at cricket stadiums and other public places, with a watchful eye on crowds and a holstered handgun on her belt.

“Our training is quite good,” she said. “When we skate, we’re in control and we keep a strong grip on our weapons.”

Now her friends want to take skating lessons, too, and her parents and siblings are coming around to the idea of having an in-line skating officer in the family. The other day they were surprised — and impressed — to see her climb a staircase with her skates on.

“They made me do it again, just to make sure,” Ms. Aiman said.