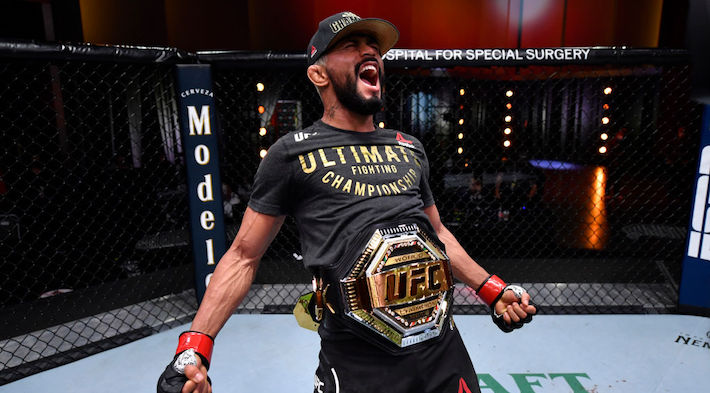 Deiveson Figueiredo (20-1) submitted Alex Perez (24-6) to successfully defend the flyweight title at UFC 255 from the UFC Apex in Las Vegas.

Perez and Figueiredo traded devastating kicks to open the bout. Figueiredo dropped down for the leg, Perez briefly took his back, but the champ turned right into the guillotine and earned the submission at 1:57 in the first round.

After missing weight in his initial bout with Joseph Benavidez, Figueiredo submitted Benavidez to win the division crown in July. At 19-1, Figueiredo’s lone loss came at the hands of Jussier Formiga by decision in March of last year. Cody Garbrandt is waiting in the wings, after missing out on the title fight against Figueiredo because he suffered a torn bicep

Brandon Moreno steps into the No. 1 contender spot with a first-round knockout over Brandon Royal earlier in the night. Figueiredo added during his post-fight press conference that’s the next title defense he wants next.

Perez earned his shot at the flyweight belt with a first-round knockout of Formiga in June, and was riding a three-win streak ahead of his bout.

Coming into the fight, Figueiredo was ranked No. 14 in the pound-for-pound rankings, and could very well be jumping into the top 10 after such an impressive showing.