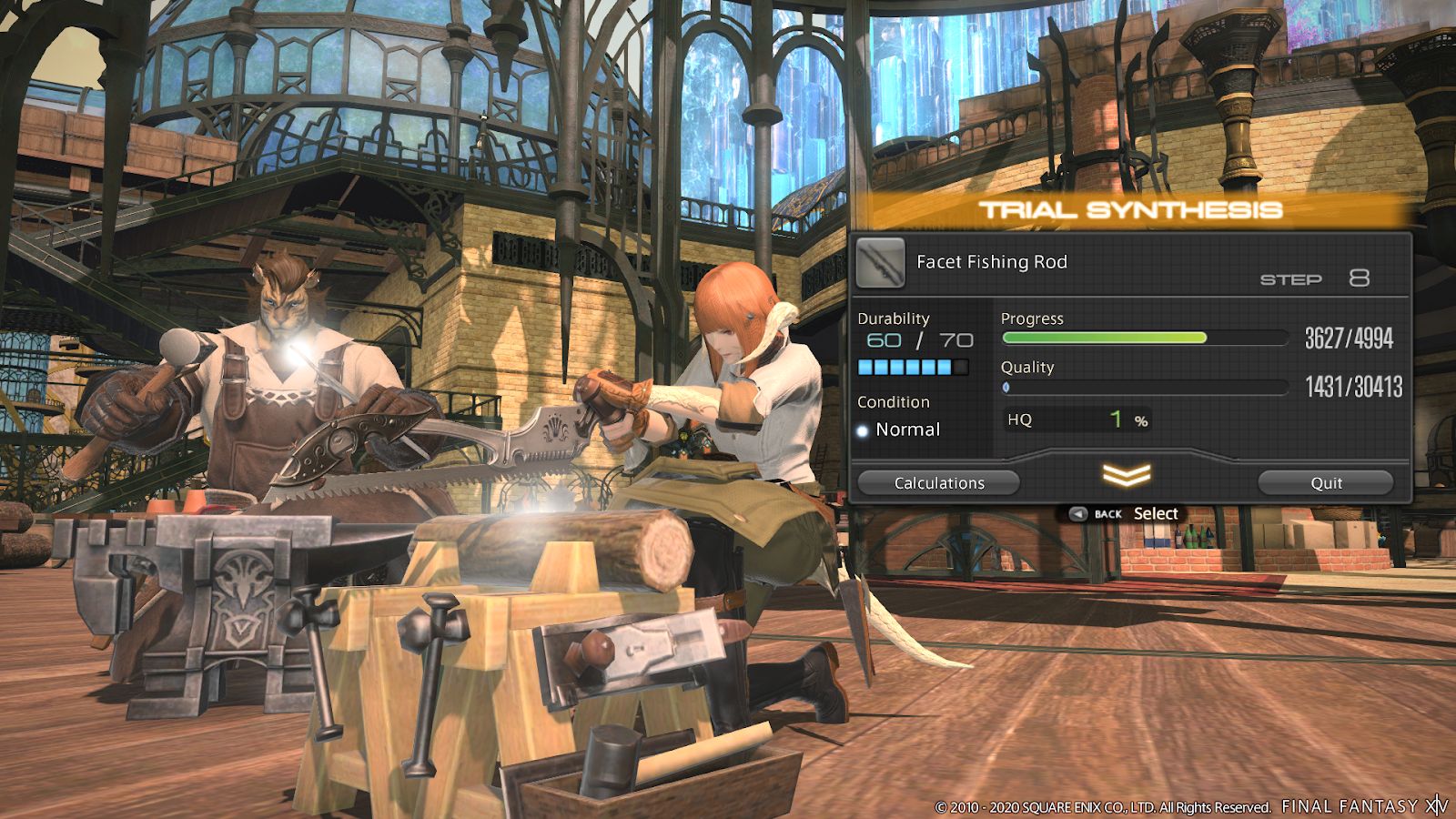 Leveling a crafter to 80 may seem straightforward to players just starting out but it can get overwhelming. While the game helpfully keeps track of where one might be in the crafting questline, it doesn’t really show all the ways one could earn the valuable XP needed. Fortunately, this FFXIV crafting guide is here to outline some of the most efficient ways to walk the road to 80.

While this is a blindingly obvious suggestion, the job quests can be really helpful if you’re doing them as soon as they’re available. They will give a hefty chunk of XP for the class and even give some gear to ease the gear requirements as one increases in level.

It is, however, not possible to rely on these alone. The first problem would be that they are drip-fed as the player climbs in level and don’t provide a consistent increase in XP. They even stop past level 70 which adds some challenge on the final stretch. These quests do also require the player to source their own crafting materials until level 60 which can make them expensive to keep up with.

The FFXIV Crafting Log can be easy to overlook but can come in handy, especially at early levels. Simply put, the log will award a one-time bonus to the player for crafting each item available to their class. It’s usually not more than a convenient bonus past the early levels but can’t hurt. Collectable turn-ins have the player take special care in creating an item, aiming to increase its quality to the highest degree possible to gain bonuses to the rewards that they’ll get for turning the item in. While it is great for XP, it can get expensive fast, as players will need to source their own crafting materials and have the gear necessary to create the high-quality collectables

Tradecraft Leves are repeatable content where players have to craft specific items in challenges. These reward some fairly steady XP and can be very useful in early levels. Unfortunately, these also require players to source their own crafting materials. The Beast Tribes scattered around Eorzea and beyond provide XP for both combat and crafting classes. They work by finding a relevant Beast Tribe and doing the three daily quests available. While they don’t award as much XP as the Job Quests, they provide more XP than simply crafting items en masse. This FFXIV crafting guide does recommend that you do these daily to keep a steady stream of XP going.

There are other benefits from doing Beast Tribes. Some of these quests, like the Namazu questline, are incredibly entertaining and it would be a shame to miss out on them. They also provide unique items for the player that range from a Palanquin carried by the Namazu and an actual tank. While they require a long questline to unlock, these are well worth pursuing for how well they grease the wheels of levelling.

The Beast Tribes that level crafters are

For FFXIV Crafters, Grand Company Supply Missions offer Supply Missions. These award generous amounts of XP and Seals in exchange for a specific item that the player is capable of crafting. Not only does it help fill out the Crafting Log, it can be great practice for getting the crafting rotations down.

Unfortunately, this source of XP can be time consuming or expensive as crafting materials aren’t provided. If one doesn’t have  Gatherer handy or the patience, they would be at the mercy of market board prices which might prove expensive. At various parts of FFXIV’s story, players will get to meet characters who need certain items crafted as part of a quest chain, similar to the Beast Tribes. Unlike Beast Tribes, however, this system resets weekly and offers up to 12 turn-ins per week and is limited to 6 per NPC. It doesn’t offer as much XP overall but it does provide Crafter’s Scrips, a currency that can be used to buy high-level crafting gear.

Many of the NPCs involved in Custom Deliveries tend to have strong ties to the FFXIV’s excellent story and their quest lines often serve as an epilogue for certain plot threads which can be an added bonus.

While the Ishgard Restoration event has unfortunately concluded, it is still incredibly useful for players to level their crafters and gatherers after they’ve completed Heavensward. Operating on a separate set of items from the rest of the content, players can deliver items to NPCs in the Firmament in exchange for XP. 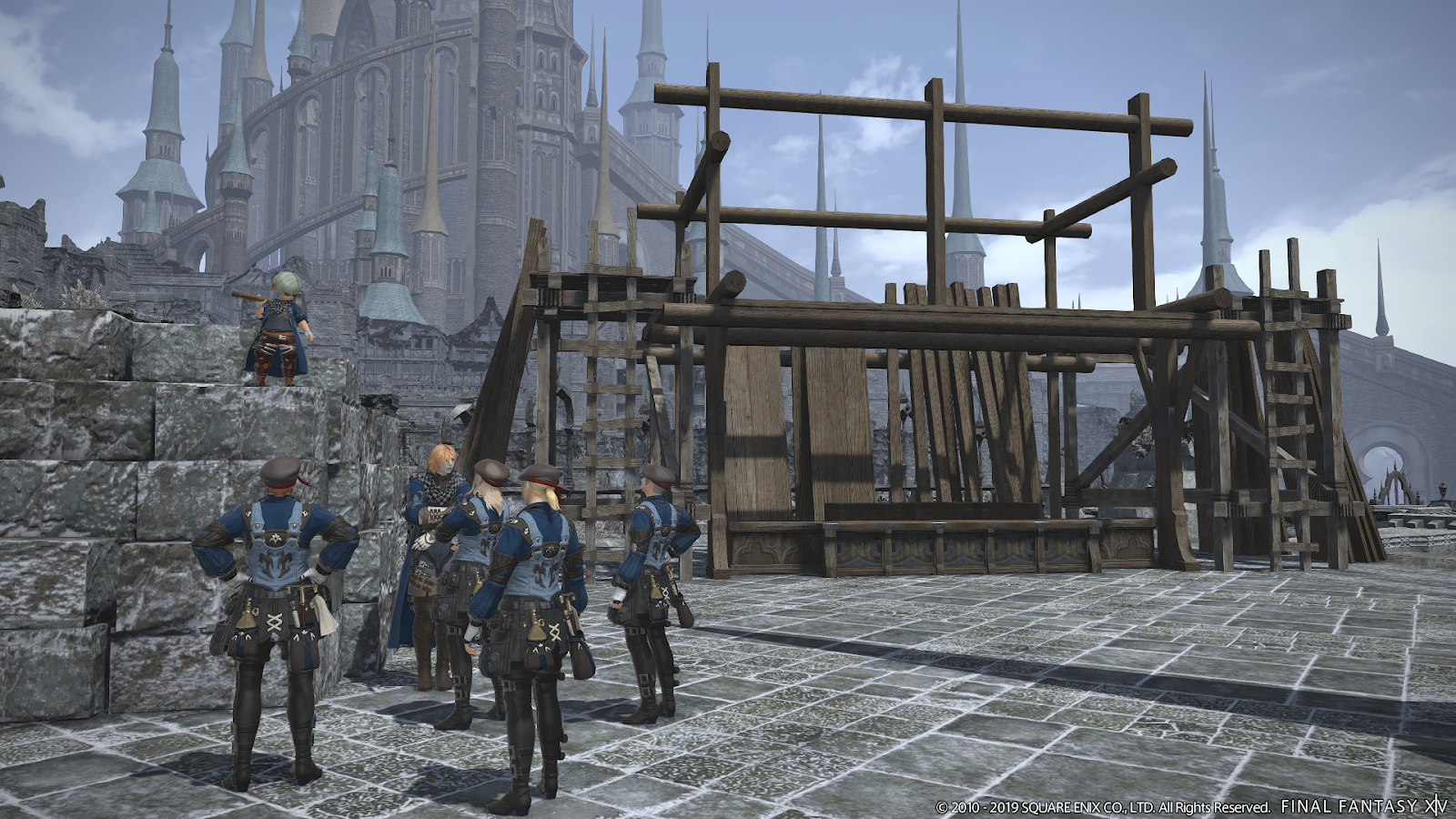 There is no limit to how much a player can turn in which allows players that enjoy long grinds to quickly level their crafters while learning the crafting rotation. Turning in items for the Ishgard Restoration also rewards Skybuilder’s Scrips, a currency useful in getting cosmetic items.

Also, be sure to check out: