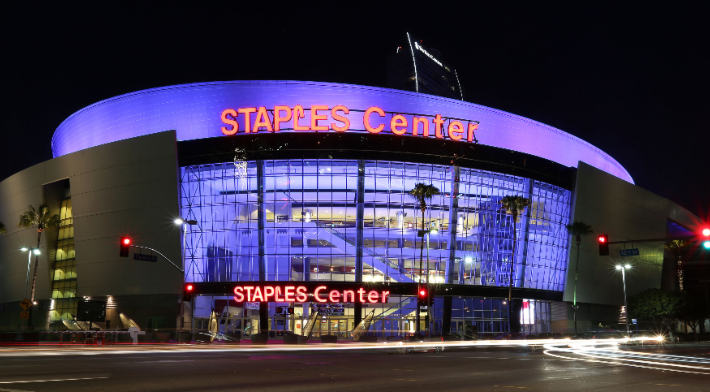 Since 1999, the stadium that has been home to a trio of basketball teams and a hockey team in Los Angeles has been known as the Staples Center. It’s among the most well-known stadiums in all of basketball, but later this year, the naming rights will be owned by someone else for the first time in the building’s history.

According to multiple reports, starting on Dec. 25, 2021, Staples Center will be renamed Crypto.com Arena. It is not the company’s first foray into basketball — they double as the jersey sponsor for the Philadelphia 76ers — but for the foreseeable future, the Los Angeles Lakers, Los Angeles Clippers, Los Angeles Sparks, and Los Angeles Kings will report to work in a place that has a brand new name.

Hearing that the Staples Center will be renamed for https://t.co/U3pcKszl4I tomorrow as part of a multi-year naming rights deal for the Lakers, Clippers and Kings arena.

Staples Center – the iconic home of the Los Angeles Lakers and Clippers among others since 1999 – will have a new name beginning Dec. 25: https://t.co/lur8Hbuv0r Arena. It’s believed to be the largest U.S. venue naming rights deal to date.

Shortly after, the company announced that the rumors were true, and that the partnership with the arena will be for the next 20 years.

In the aftermath, basketball fans took it upon themselves to make fun of the move, with two big things sticking out: the name doesn’t exactly roll off the tongue, and the place will forever be known as “Staples Center,” regardless of who has the naming rights.

You’ve got to be kidding me. At least call it the Crypto Center. How terrible does crypto .com arena sound? I’m depressed.

BREEN: We’re coming live to you from the CRYPTO DOT COM ARENA!

MJAX: Come on Jeff we all know that’s Superman’s dog.

crypto dot com arena might be the worst sounding arena in all of sports. it makes smoothie king center sound immaculate.

The last time the Lakers pulled off a huge deal — the one that brought Russell Westbrook to Los Angeles and has looked better for the Washington Wizards at this early juncture — was the punchline of some jokes, too.

And because the Lakers have LeBron James, there were a few LeBron-inspired jokes that popped up.

LeBitcoin got the Lakers $700 million and couldn’t spare a few bucks to keep Alex Caruso? Coming up next on Undisputed, why Crypto Dot Com Arena is going to be the King’s Crypt, Tho!

LeBitcoin may be the greatest nickname in sports history.

The new name will go into effect in time for the Lakers’ Christmas Day showdown with the Brooklyn Nets.