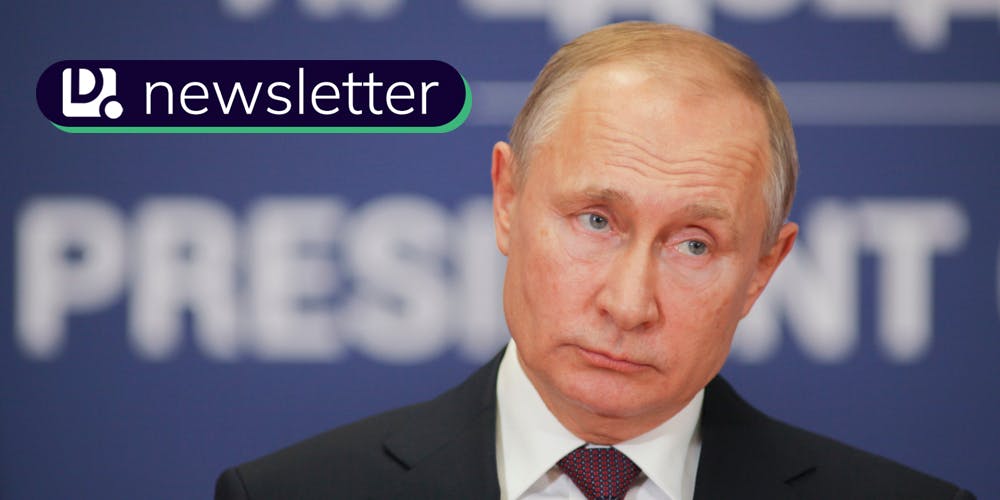 It’s Monday, so that means it is time for Mikael’s weekly “One Dumb Conspiracy” column. This week he looks into how a website is spreading a false claim about Vladimir Putin and human trafficking.

So let’s dive into it!

BIG TECH: Four Amazon drivers are suing the tech giant after tornadoes destroyed a warehouse in Illinois last year, killing six workers. The lawsuit was filed on behalf of the victims and four drivers who survived. The complaint alleges that Amazon didn’t modify employee schedules or allow employees to take time off as the storm came. Read more about the lawsuit here.

POLICE: A police department has blocked a TikTok account that was using the platform to hold them accountable. The user stitched several videos posted by the account. While the police videos tried to make them look funny and endearing, the creator contrasted them directly with stats and articles about law enforcement misconduct. Their response was to block the account.

REVIEW: The second season of Russian Doll was recently released on Netflix, and our Senior Culture Reporter Audra has a review of it. She says that the dramedy “takes a quantum leap, for better or worse.” You can check out her full review here.

No, Putin did not free 35K kids from human trafficking tunnels in Ukraine

Supporters of the QAnon conspiracy theory have fallen for the false claim that Russian President Vladimir Putin rescued 35,000 children from human trafficking tunnels in Ukraine.

The story was published on April 5 by Real Raw News, a website notorious for spreading fabricated stories aimed at riling up conspiracy theorists.

The article, which cites an unnamed “Mar-a-Lago source,” claims that Putin called former President Donald Trump to alert him to the liberation of children from “indentured servitude.”

Putin is also claimed to have referred to Ukraine as “Eastern Europe’s nexus for worldwide sale of especially young children” during the made up phone call.

The article goes on to promote other conspiracy theories such as the claim that Russia only invaded Ukraine to “obliterate bioweapon laboratories” but that “pedophile encampments” were soon discovered.

“On Saturday, Putin revealed to Trump that approximately 35,000 children, most of whom are Russian, were freed from sexual enslavement after his forces identified and discretely targeted 150 trafficking covens,” the article falsely claims.

The so-called “trafficking covens” were allegedly liberated by Russian Special Forces. The Real Raw News story even went on to claim that Putin had declined to “arbitrarily bomb the camps because he had no way of knowing if children were inside.” In reality, Putin has seemingly had no issue with his troops bombing children’s hospital in Ukraine.

The fabricated news article blew up even further, as noted by USA Today, after it made its way to Facebook later in April.

Zero evidence has been shown to verify any of the claims made by the conspiratorial blog.

Real Raw News for years has honed its ability to tell conspiracy theorists exactly what they want to hear by combining topics such as human trafficking, cannibalism, and pedophilia while painting Trump as a Christ-like savior.

Other stories currently on Real Raw News include those titled “Military Sentences Fauci to Hang!” and “Military arrests David Axelrod.”

Nearly all of the website’s stories center around QAnon, the conspiracy theory that claims Trump is working to bring down a Satanic cabal of child-eating pedophiles with mass-arrests and executions.

Despite Real Raw News admitting on its website that its stories “contains humor, parody, and satire,” conspiracy theorists continue to fall for nearly every one.

Start a podcast and share your story with the world

Travel expert and television host Jo Franco went from undocumented immigrant, to global influencer, to smash-hit podcaster. Her podcast, Not Your Average Jo, features deep-dive conversations with guests from around the world, offering tangible advice to help young adults, students, and professionals level-up in life.

💰 An OnlyFans creator went viral after sharing a video of her trying to explain her job to a tax professional. One of his questions: “And you make money on that?”

🍔 “Karen” alert: A woman was filmed trying to save a spot in the McDonald’s drive-thru line so that her husband could cut everyone else with his truck.

✈️ An ex-flight attendant is going viral for spilling the tea over her least favorite parts of the job and some things people may not know about the industry.

🍽️ A woman recounted in a viral TikTok all of the red flags a man put on full display during their first date. One of them? He attempted to dictate what she would wear to dinner. Yikes.

💪 Noom claims its cognitive behavioral therapy and one-on-one weight loss expertise will help users lose weight and live a healthier lifestyle, so we tried the app out for ourselves. Here are the results. *

🕵️‍♂️ To mark the fourth anniversary of the first QAnon drop on 4chan, the Daily Dot tells stories about Q that haven’t been looked at.

🥝 Former TikTok employees are speaking out against the company’s grueling work culture. Want more stories like this? Sign up for Passionfruit, the Daily Dot’s weekly creator economy newsletter, for more coverage.

A “Karen” was filmed threatening to fight a high school student who was working at Walmart. A video of the incident has gone viral and is a pretty classic “Karen” meltdown.