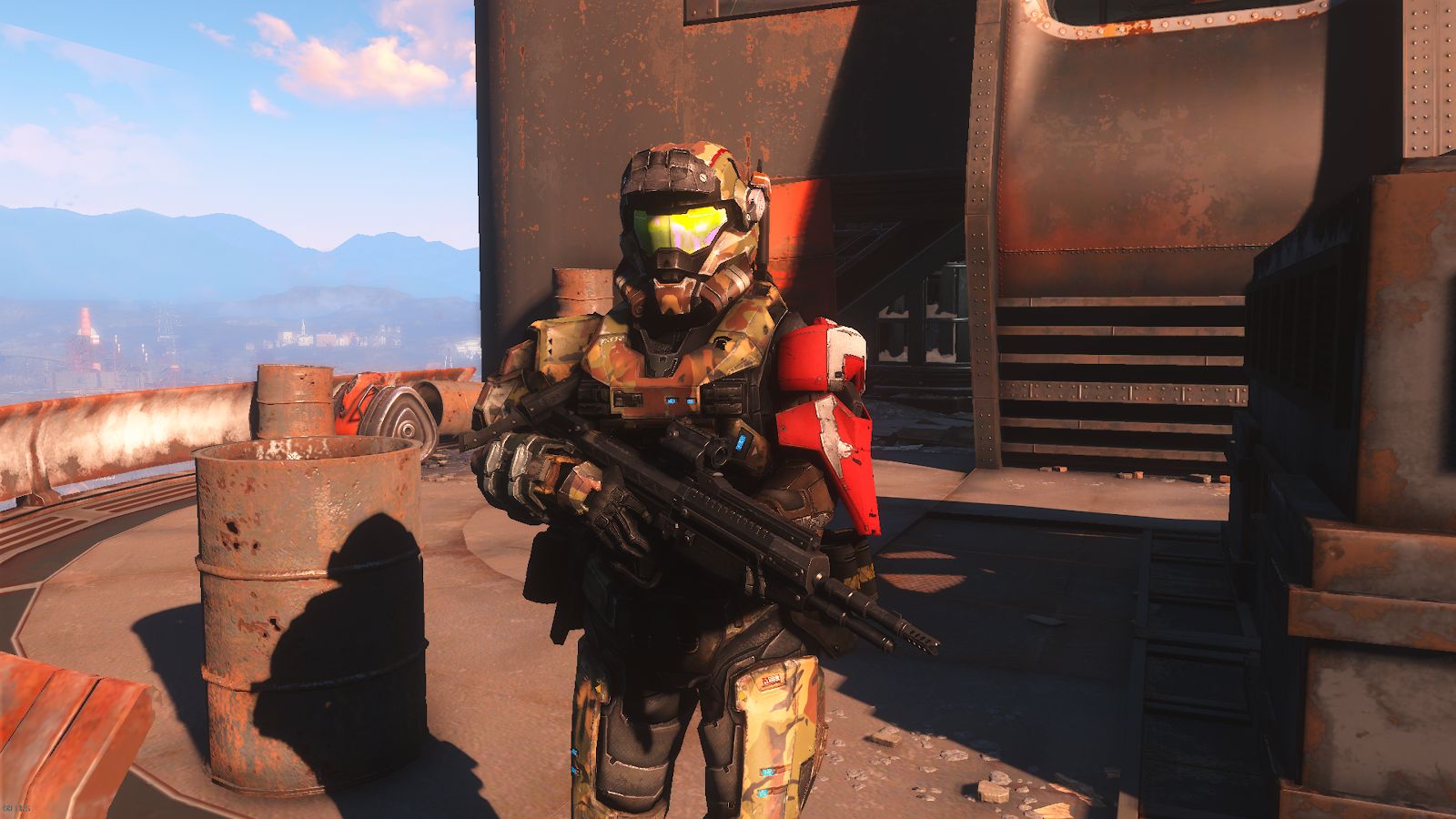 Any visit to the Fallout 4 Nexus will reveal a staggering number of incredibly detailed, high quality weapon mods. The Halo Mod, Misriah Armory brings Halo’s iconic weapons into a new light. Taking advantage of the game’s inherent ease of modding and its weapon customisation system, a team of modders have implemented custom models and animations to create one of the best Fallout 4 Halo Weapons mods out there.

Named after the fictional company that produces the UNSC’s arsenal, the mod brings eight weapons into the Commonwealth. Unfortunately, the mod’s Nexus page doesn’t fully outline what this mod does in its entirety. It doesn’t cover how expansive the weapon customisations are or how they handle in gameplay. With luck, this article will explain why this mod should be in a Halo fan’s load order at least once.

What the Misriah Armory Mod brings to Fallout 4 This mod brings eight fully-realised weapons to Fallout 4 in stunning detail and a deep respect for Halo’s expansive lore. The M99 Stanchion – Picture Credit: NovaFinch on the Nexus

Misriah Armory’s familiarity with Halo’s lore can be reflected in its weapon list with each weapon using the name the UNSC gives it. While flavour text has been tweaked to fit Fallout’s setting, much of its art style fits Halo: Reach’s. The M99 doesn’t even exist in the Halo games. It’s an outdated weapon present only in books but has been carefully crafted and implemented in the game. To state the blindingly obvious, Fallout 4 plays very differently from Halo. In Fallout, players can aim down sights, don’t have to worry about energy shields, or deal with a carefully curated weapons sandbox. Naturally, the guns in this Fallout 4 Halo weapons mod are used differently.

These guns fill their own niches and have modifications that suit certain playstyles. Each weapon deals different amounts of damage per round and the types of ammunition used. The Magnum and Sniper Rifle each chamber the .50BMG round that they use in Halo canon, limiting how often they can be used while providing a justification for their heavy damage. The SMG uses 10mm rounds as a stand-in for the caseless ammunition it is supposed to use, allowing it to function as a low-damage bullet hose.

Other weapons, such as the Assault Rifle and DMR allow the player to choose the ammunition the weapon will fire, allowing for tradeoffs between ammo availability and damage, an element of choice that works well in Fallout’s post-apocalyptic context.

It should be noted that the weapons deal significantly more damage than vanilla weapons, especially at lower levels.

While this is offset by the proportionally high crafting costs and scarcity of the weapons, they are enough to trivialise much of the game. The mod accounts for this by allowing players to increase or decrease the damage the weapon deals to tailor the Fallout 4 Halo Weapons mod to their own mod list. While a common feature in many mods, it’s always welcome as it reduces the need to find compatibility patches for gameplay overhaul mods. As mentioned above, this mod makes full use of Fallout 4’s weapon modification system and is one of the best parts of the mod. In line with Fallout 4’s customisation options, these weapons can have their barrels, magazines, receivers, sights and stocks changed with both real-world and fictional modifications to recreate weapon variations from across the Halo games and even extended fiction.

For example, the Magnum’s smart scope modification allows it to imitate the famously overpowered Halo: Combat Evolved Magnum. The suppressed variant from Halo 3: ODST can be achieved by using one of the barrel modifications. Modifications for the receiver can also be applied to make the gun fully automatic.

These modifications can alter the ways each weapon handles and can make them more effective in different situations. The DMR can be used to clear out a subway almost as well as the Assault Rifle if the player mounts a reflex sight on it. Conversely, the Shotgun can be lethal at longer distances with slug rounds and a scope and the Sniper Rifle can take a shortened barrel and iron sights to function as a DMR with excessive stopping power.

Some modifications are wholly unique to the mod. One allows the Sniper Rifle to fire in two round bursts, noted by the mod’s own description to be impractical in most contexts except that it can demolish a deathclaw at close range. Some introduce much-needed depth to a weapon. The traditional Assault Rifle lacks iron sights which isn’t an issue in Halo but troublesome in Fallout. The mod takes inspiration from Halo 5: Guardians’ attachments to attach scopes in Fallout 4. Overall this Fallout 4 Halo Weapons mod allows is a must-have for anyone who enjoys Halo’s world and lore. It draws on classic weapons and puts them in a new context by placing them in Fallout 4’s combat system and expanding on how the weapons operate through a fantastic range of customisations.

The high-resolution visuals are just the icing on the cake.

Other Gaming News and Guides: