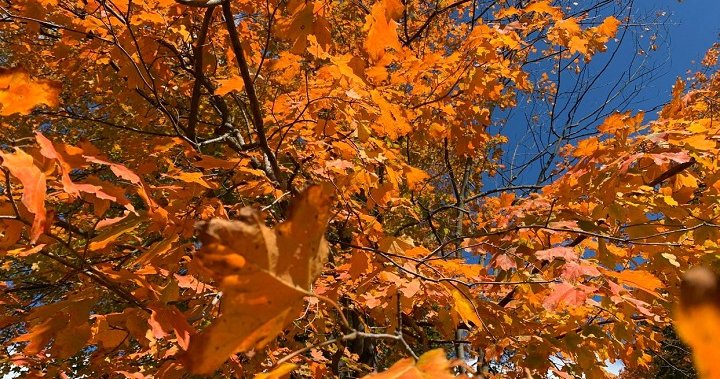 Be it the official arrival of fall, or National Tree Day, plenty of Winnipeggers are in celebration mode. This year also happens to be the 10th anniversary of tree day in Canada.

Mayor Brian Bowman said Wednesday he planned on marking the day by planting a tree in each of the city’s 15 wards and he encouraged Winnipeggers to join the Million Tree Challenge.

“My council colleagues and I have been really focused for some time now on the Million Tree Challenge and this is something that I would invite all Winnipeggers to be part of,” he said.

“As we grow to a million people, we want to plant a million new trees to continue to make our city as green as possible,” he said.

“It’s a challenge — it’s going to take many, many years — but I would just invite Winnipeggers to learn more about it and to join the challenge by simply planting a tree on your property, if you can, or join some of the tree plantings that we have in other spaces.”

In honour of National Tree Day, I’m on a tree planting tour in all of Winnipeg’s electoral wards with respective Councillors. I want to encourage Winnipeggers to do your part by joining the Million Tree Challenge. For more information, please check out: https://t.co/4OPsUFoy4Q pic.twitter.com/TPhqBdceEM

The Assiniboine Park Conservancy (APC) announced in a release Wednesday it is launching a new Trees for Tomorrow fund to protect and preserve the health of Assiniboine Park’s cherished forests and tree canopy for future generations.

The funds initial goal was to raise $10,000 to support the planting and care of 100 new trees in the park next spring.

“Trees add such tremendous value to our community, our natural environment, and our lives,” said Gerald Dieleman, senior director of horticulture at APC.

“When we plant a tree and commit to maintaining a healthy tree population, we are investing in our future and leaving a legacy for our children and grandchildren to enjoy years from now.”

The mix of more mature five to six-foot deciduous and coniferous trees planted next spring will also be counted toward the One Million Tree Challenge launched by the City of Winnipeg in partnership with Trees Winnipeg.

“The trees we are planting in Assiniboine Park today, next spring, and in the years to come will provide habitat for wildlife, shelter from the winter winds, and shade from the summer sun for future generations of park visitors,” said Dieleman.

Additionally, participants in the APC’s Autumn Adventures Nature Tots program will be planting some smaller kid-sized saplings in the riparian forest along the Assiniboine River.

Much of this forest had been destroyed by the flood back in 2012. APC said it has invested time, effort and resources to clean up the area and plant new trees, “giving the natural process of regeneration a helping hand and reducing the time required for the return to a mature and healthy ecosystem.”

The Manitoba 150 Host Committee has also said in a release that they are throwing their hat into the ring in support of Winnipeg’s Million Tree Challenge.

The Committee said it is partnering up with Telpay and Tree Canada in support of the cause.

“This partnership, along with the 15,000 trees given away by Manitoba 150 and Telpay in the spring of 2021 will allow 25,000 saplings to be planted in Winnipeg,” said Monique LaCoste and Stuart Murray, co-chairs of Manitoba 150.

“A sesquicentennial legacy that will continue to grow for the next 150 years and beyond, as we work to support the goal of combatting the effects of climate change and making Manitoba an even better place to live.”

Furthermore, the Committee along with its partners and Manitoba’s premier, Kelvin Goertzen are planting roots at the Legislative building in honour of the province’s 150th anniversary and National Tree Day.

“I’m pleased to partner with the Manitoba 150 Host Committee to mark International Tree Day with the planting of a beautiful Manitoba Maple on the grounds of the Legislative Building,” said Goertzen.

Also, to commemorate the day, Telpay will begin planting 100 fruit and berry bushes throughout the community connected to the Neeginan Aboriginal Centre.

How have fellow Canadians been spending the day? Well according to a release from Tree Canada on Wednesday, close to 600 volunteers got down in the muck and planted 3,000 trees in twelve communities across Canada.

The volunteers were from all over Canada including Winnipeg, Saskatoon, Ottawa, Montreal, Quebec City, Saint John, Charlottetown, Edmonton, North Vancouver and more.

“Climate change is also top of mind for many Canadians. Planting trees are a practical and economical way to fight climate change and are an easy and natural way to cool and beautify our cities,” Tree Canada said.

Research shows that walking through a forest for just 15 minutes can lower symptoms of anxiety and depression and help to boost your mood in a positive way.

“Given that forest cover in Canadian cities has been declining over the past 20 years and that more than 80 percent of our population now lives in urban areas” Tree Canada added, “it is more important than ever that continued efforts are placed on increasing the canopy and resiliency of Canada’s urban forests.”

3:47
The science behind the beauty of fall

Advertisement
The science behind the beauty of fall

While we are on the topic of trees, you may have noticed Winnipeg’s canopy has taken on fall colours.

A city forester explained to Global News why the leaves go orange all the way to purple during this season.

“What happens at this time of year is the chlorophyll in the leaves starts breaking down and the other pigments in the leaves are starting to get expressed,” Martha Barwinsky said.

“So all of these pigments are always in the leaves throughout the year and it’s just at this time of the year that chlorophyll and photosynthesis start shutting down and we see the yellows and the oranges and the reds and purples coming out.”