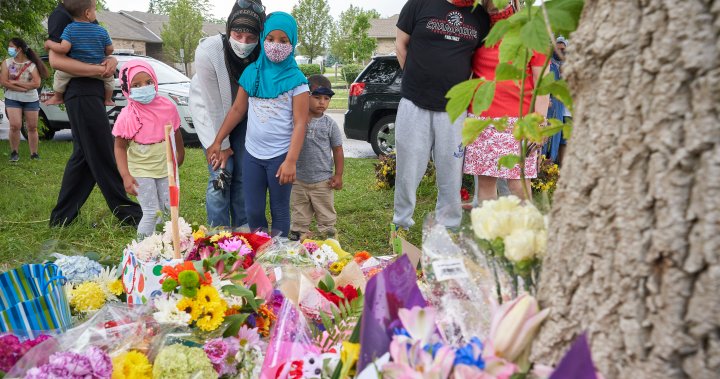 Written materials allegedly found by police following the June killing of a Muslim family in London, Ont., indicate the alleged attacker was influenced by the gunman who took 51 lives at two New Zealand mosques in 2019.

Multiple sources familiar with the investigation confirmed to Global News that a large volume of ideological writings, some allegedly penned by the suspect himself, were seized during the investigation into the vehicle attack that left four dead.

The written materials, which sources said were found in Nathaniel Veltman’s truck, home and computer, allegedly showed he was a follower of Brenton Tarrant, who opened fire on worshippers in Christchurch two years ago.

It would be the latest attack linked to New Zealand’s worst mass murderer. A subsequent shooting in 2019 that killed 23 at a Walmart in El Paso, Texas, was also among those linked to the New Zealand attacks.

Following the June 6 attack in London, Veltman was charged with terrorism offences for allegedly striking a Muslim family with his pickup truck, but in the five since then authorities have disclosed little about his alleged motive.

Read more:
After London terror attack, Muslims look over their shoulders, but get no federal help

While police have called the killings “hate motivated,” several sources familiar with the investigation told Global News that accused’s written materials pointed to the Christchurch gunman.

Veltman’s written materials — which have never been previously disclosed, and which have not been reviewed by Global News — may explain why Canadian authorities modified the charges against him soon after the attack, from first-degree murder to murder-terrorist activity.

Salman Afzaal, 46, his 44-year-old wife, Madiha Salman, their 15-year-old daughter, Yumna, and her 74-year-old grandmother, Talat Afzaal, were all killed the evening of June 6 while the family was out for a walk. The couple’s son, nine-years-old at the time, survived but was seriously injured.

The allegations about the motives behind the attack add layers of “sadness” to an attack that killed three generations of a Muslim family, said Mustafa Farooq, CEO of the National Council of Canadian Muslims (NCCM).

“As we learn more about this attack and the motivations, it’s incredibly sad to hear,” said Farooq. “This was an act of terror.”

While the federal government has taken steps to combat Islamophobia in recent months, more is needed from all levels of government, he said.

The NCCM is calling on the Ontario government to pass the Our London Family Act, which includes several proposals to combat racism and discrimination in the wake of the fatal attack on the Afzaal family.

“It’s simply unacceptable, and these things keep happening,” said Farooq. “We need to do far more to challenge Islamophobia in this province and in this country.”

The London Police Service declined to comment because the case was before the courts.

The accused’s lawyer, Christopher Hicks, said in a statement that any “‘sources with direct knowledge of the investigation’ are compromised sources, in that the information was not legitimately obtained by them.”

“A reasonable inference is that obligations of confidentiality and privilege were breached,” Hicks said.

The sources did not describe the writings as a manifesto, although such writings are appearing more frequently in the wake of terrorist violence, according to Canada’s Integrated Terrorism Assessment Centre (ITAC).

The Christchurch killer was among those whose attacks were accompanied by writing intended to inspire others.

“The majority of recent IMV (Ideologically Motivated Violent) extremist attacks were conducted by lone actors, who also look to inspire other extremists in the milieu to act,” ITAC wrote in its 2020 annual report, released to Global News under the Access to Information Act.

“Manifestos are increasingly common amongst IMV extremist attackers and are meant to resonate with like-minded individuals.”

Manifestos and other written materials are part of an emerging trend in attacks associated with the far right, said Colin P. Clarke, a counterterrorism analyst at the Soufan Group, a security consulting firm based in New York.

Often released online prior to an attack, they are part of the “psychological warfare” of terrorism, according to Clarke, and designed to inspire other acts of violence around the world.

“We often talk about the kinetic and physical aspects of terrorist attacks, but we have to remember the even bigger picture is psychological warfare,” Clarke told Global News. “That’s what this is all about.”

“A lot of the far-right attacks build off of each other.”

On March 15, 2019, Tarrant entered two mosques in Christchurch and opened fire with an AR-15 style rifle as almost 200 people gathered for Friday prayers. He announced the mass killing over social media and livestreamed part of the shootings on Facebook.

Attacks in Norway and elsewhere in the U.S. have been tied to the Christchurch gunman by investigators.

In 2019 in Poway, Calif., a gunman walked into a synagogue and opened fire, killing one woman and injuring three others. The shooting, which occurred on the final day of Jewish Passover, was carried out by a gunman who posted an antisemitic and racist open letter on the internet shortly before the shooting, praising the New Zealand attacks.

Clarke said the Christchurch gunman has been elevated to the level of Norway’s Anders Breivik as a political symbol and key motivator among right-wing extremists. Breivik killed 77 people in a 2011 bomb and shooting rampage.

Read more:
How many Canadians have fallen victim to terrorism?

Many of the recent attacks include common elements, like a lone actor with no clear or formal connections to far-right organizations and racist writings that are often posted online before or after the attack.

“These individuals come from this far-right ecosystem,” Clarke said. “A large part of which is constructed virtually and online.”

Clarke said these so-called manifestos pose a unique challenge for police as the hateful ideas ricochet across the internet and make it difficult for investigators to track.

“Even when you get social media companies to help out with content moderation, people just put the stuff back up there,” he said. “It’s very hard to keep this off the internet.”

Global News has not seen any evidence that Veltman attempted to publish any of his writings before or after the attack.

Crown lawyers had initially charged the accused in the London attack with four counts of first-degree murder and one of attempted murder, but later added terrorism charges.

It marked the first time in Canada that’s anti-terrorism laws have been used to prosecute an alleged Islamophobic act as an extremist hate crime.

Veltman is scheduled to make another court appearance on Nov. 17.