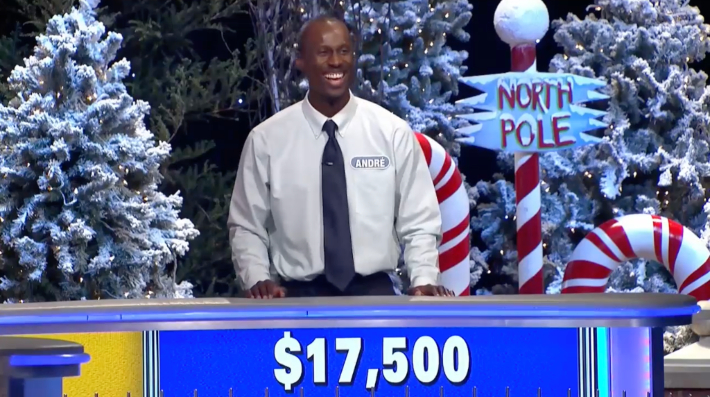 Andre Ingram‘s basketball career included six NBA games as a member of the Los Angeles Lakers and many, many more games in the G League, where he has gone down as the person with the most career games played and the most made three-pointers in league history. Now, Ingram gets to add something else to his collection of career accolades: Wheel of Fortune winner.

Ingram, who is still suiting up for the South Bay Lakers, appeared as one of the contestants on Friday’s episode of the show, and he didn’t just do well, he managed to win big. Thanks to some good fortune on the first two puzzles of the night, Ingram ended up taking home $31,750. In second place, Megan won a very impressive $19,855, and in third, Thipp took home $6,800.

Perhaps the most impressive thing about his big payday is that Ingram did it without winning anything in the bonus round. After getting the usual RSTLNE, Ingram picked the letters GCPO, setting up this:

As Pat Sajak said, getting one more letter would have helped Ingram out in a big way. He figured out immediately that the first word was “FIERCE,” but Sajak’s prediction was correct, and Ingram was unable to get “BLIZZARD.” As a result, he did not add $39,000 to his final total.

Still, this is an impressive chunk of change for Ingram. It is debatable whether or not it is as impressive as spending more than a decade in the NBA G League and, upon playing in your first NBA game with the Lakers, you score 19 points and earn praise from the late Kobe Bryant.