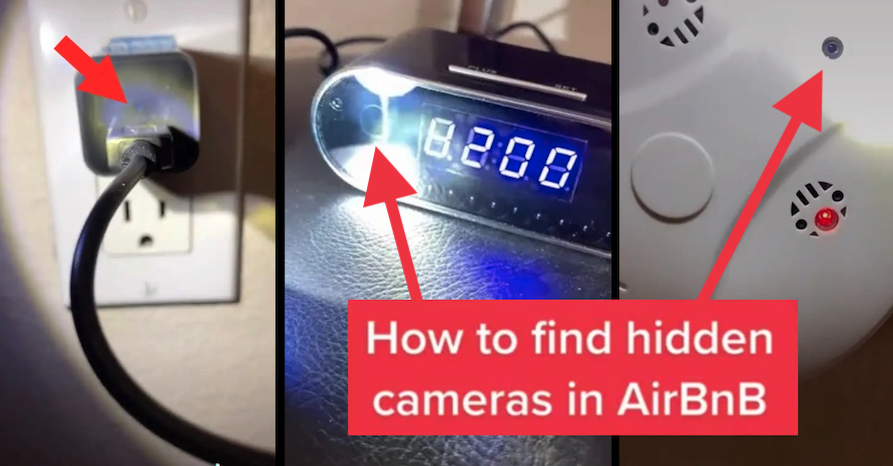 If you’re going on vacation soon, Marcus Hutchins might be your new best friend.

In a TikTok video he recently posted, Marcus shows us all how to check the rooms we’ll be staying in for the telltale signs of hidden cameras.

It might seem obvious, but Marcus explains that certain things are red flags.

Now, just because an alarm is placed suspiciously doesn’t mean it contains a camera.

“One way to see if a device has a camera is to shine a bright light at it.

If you hit a camera lens, it’s going to give a blue-ish reflection.

You can test this by shining a light at your phone and seeing how the camera looks when placed under a flashlight.”

But Marcus is just getting started.

“Now, this clock is mirrored, but if we shine a bright light at it, we can see through the glass and see there’s a camera there.

This technique can also work on two-way mirrors.”

Yes, it gets even creepier.

Because there are cameras in CHARGING devices too.

“The camera is USB charged, and the wall charger it’s plugged into is actually also a camera.

If we shine a light on it, you can see that little pinhole in the middle with the blue reflection, that is the camera lens.”

“Night vision cameras use infrared LEDs to see and, if we turn off the lights and use the front-facing phone camera, we can actually see these LEDs.

The front-facing camera is the only one that tends to work because the back-facing one has an IR filter.”

His last bit of advice, which might seem obvious, but it certainly doesn’t hurt to get a reminder…

“You always wanna check any suspicious devices or holes that are facing the shower, dressing area, or the bed.”

So why trust Marcus? Well, he’s well known as being a bit of a “grey hat” hacker. He helped stop the bleeding from one of the worst cyberattacks in modern times, WannaCry. back in 2017, but was eventually arrested for his work on the KRONOS malware.

Long story short, the guy has gotten his hands dirty, so he knows the really bad stuff people can get up to.

Be safe out there!

Read Your Way Through Reykjavík

At Last, Online Travel Planning Is Becoming (a Little) Easier