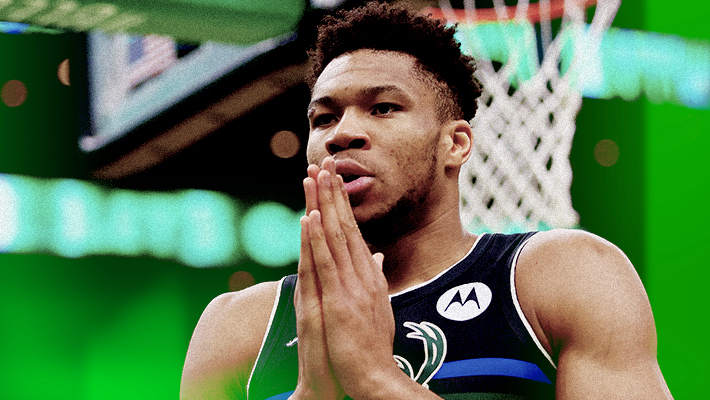 Two games into the 2021 NBA Finals, it appeared Giannis Antetokounmpo was destined to fall short once again. After flamingoing his knee in the wrong direction against Atlanta, he had scuttled into a 20-point Game 1 in Phoenix, then watched as Milwaukee’s defense came apart in Game 2. The Suns were, it seemed, homing in on their first-ever championship.

Then, Giannis willed his body to forget about whatever may or may not have been holding his knee together by that point, put the Bucks on his back, and painted one of the greatest NBA Finals masterpieces the league has ever seen, capped off with a 50-point, 14-rebound, five-block masterpiece in the clinching Game 6 win. The Bucks were champions.

Long hailed for his unique talent and absurd work ethic, Giannis put all of it into practice to get his first ring. Years after he first won an MVP, there was finally no denying Giannis was the singular force any challenger would have to confront in order to rise in the NBA. As the league moves on from the LeBron James era (at least the one where it orbits completely around LeBron), the summer of 2021 may be looked back on as the time when Giannis rebuilt the road to a title directly through downtown Milwaukee.

When he was in Cleveland, now-Pelicans president David Griffin used to laud LeBron’s ability to “dictate outcomes.” In a sport where just 10 people occupy the court and one can have such an outsized impact, it’s a basic way to put into words what someone like LeBron did when he put a basketball game into his palm. There was Game 6 of the 2012 East Finals against Boston, when LeBron broke through with 45 points, 15 rebounds, and five assists to return to the Finals. There was Game 7 of the 2016 Finals, with 27 of the Cavs’ 93 points and The Block to give Cleveland its first title. There was even Game 1 of the 2018 Finals, where after a 51-8-8 it felt for one ecstatic night as if LeBron might steal another title from the Warriors’ dynasty with Jeff Green as his second-best teammate.

Especially in Cleveland, it felt as if LeBron could lift any group within sniffing distance of a championship. For a decade, with LeBron, you had a chance. And that meant anyone facing LeBron could never feel complete confidence that they would win.

If anything, the past two mostly LeBron-less NBA postseasons have served as a reminder of how incredibly difficult it is to win playoff basketball games consistently. Star players compete every other day for two months, playing 80-plus percent of the minutes every game, with the entirety of the opponent’s gameplan, emotional energy, and crowd buzz aimed toward the target on your head. Paths to the basket vanish and pet plays are smoked out. Nobody can stay on the court unless they are excellent on both sides of it. Star players are made or exposed.

And during those two years, everyone from back-to-back MVP Nikola Jokic to young stars like Trae Young and Devin Booker have been smacked in the face with that reality of the NBA postseason. While NBA fans have argued about the legitimacy of the Bubble and whether injuries place an asterisk on the 2020 and 2021 championships, the league’s best players have vied for the top rung on the ladder, which may be the place where Giannis is currently settled.

He is not representing his conference in the Finals this time around, but of any single player in the NBA, Giannis over the past two years has shown he will be standing in the way of anyone hoping for a ring. Last year, Giannis got revenge on Miami, outdueled Kevin Durant, then slammed the door on the Suns. This year, Giannis said goodnight to the outmatched Bulls and then, without Khris Middleton, gave the Celtics all they could handle in seven games before he quite simply ran out of gas.

In that second round matchup, Giannis became the first player ever to record 200 points, 100 rebounds, and 50 assists in one playoff series. His fingerprints were all over every single thing Milwaukee did, as he registered a 41.5 percent usage rate and a 39.4 percent assist rate. And he was only on the bench for 56 total minutes in seven games.

It’s difficult to say there’s anything more at all that Giannis could have done. Middleton’s injury came at the worst possible time, particularly because he has a reputation for giving the team that knocked Milwaukee out of the playoffs headaches. The Bucks never found a PJ Tucker replacement. They dealt Donte DiVincenzo for Serge Ibaka at the trade deadline as a hedge against Brook Lopez’s back issues, then played Ibaka a total of three minutes and four seconds against the Celtics. After giving up two second-round picks for Grayson Allen and signing him to a $20 million extension, Milwaukee was burned as Allen struggled mightily in the conference semis. In Game 7, it took an all-time role player performance from Celtics forward Grant Williams and some of Jayson Tatum’s best shot-making for Boston to pull away in the final 24 minutes.

These are the breaks of the NBA playoffs, and Boston suffered its fair share as well. In spite of all of it, though, Giannis still entered the second half of Game 7 with a chance.

Sure, he lost, but for much of the series, the Bucks could have looked confidently toward June and seen only their old foes in Miami standing in the way of another Finals appearance. They were in that position because of Giannis. And the Celtics went to Miami for Game 1 precisely because they beat Giannis.

Only once every generation or so does a player emerge who is capable of getting his team that close simply because he walks onto the court. It’s probably too early, after two dominant postseasons, to call this the Giannis era. But if we are in the final days of the LeBron era, Giannis has put himself in position to be the person who takes up residency on the throne.