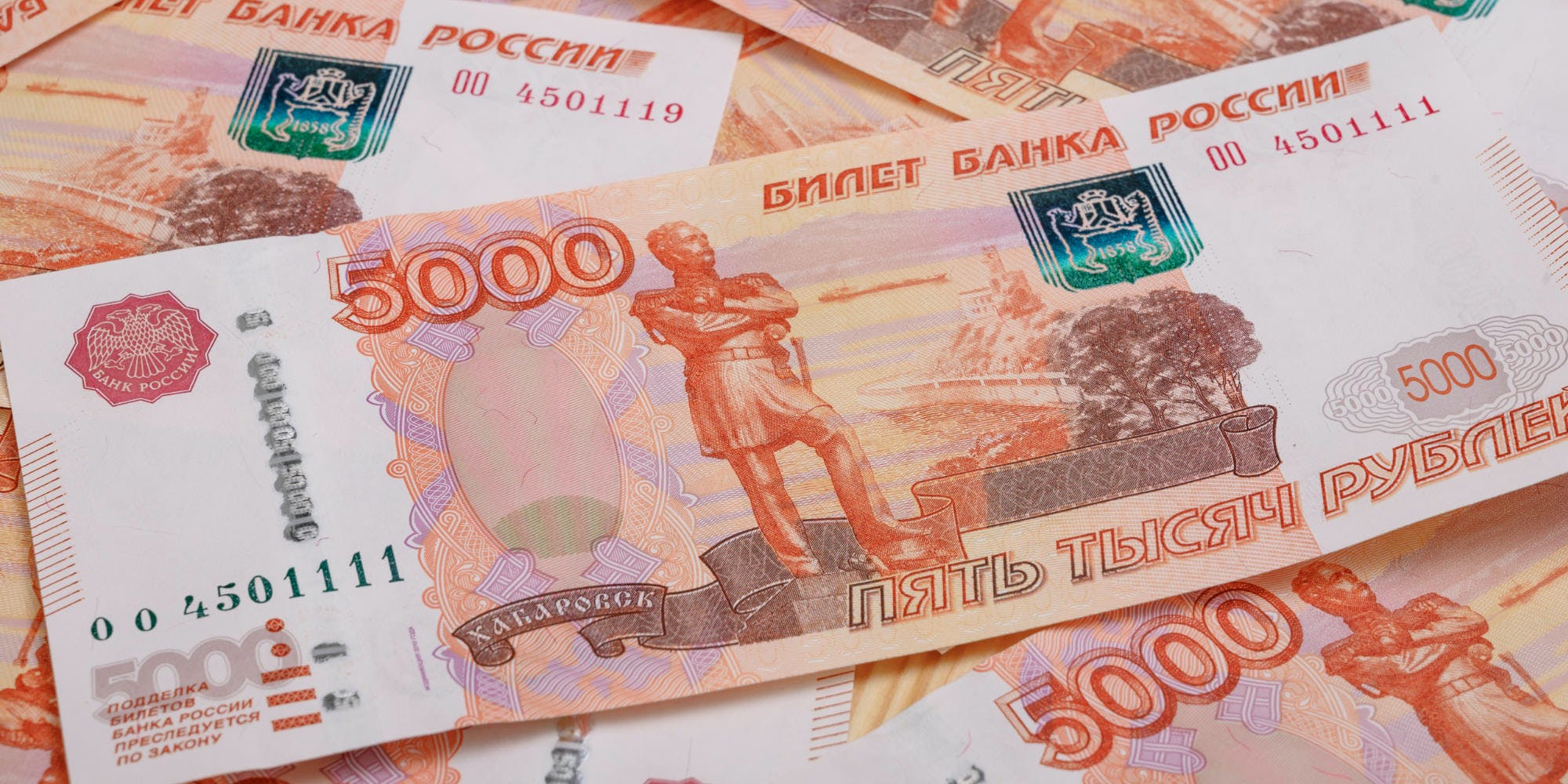 With the Russian ruble crashing in value due to the nation’s invasion of Ukraine, could we be looking at the new version of the Iraqi dinar scam, with investors buying it up in huge chunks in the hope that Russia will recover and make them rich?

Emerging in the mid-2000s, the dinar scam went from a few U.S. service members trying to make a quick buck to a large-scale scam that bilked hundreds of millions of dollars from countless Americans.

The faulty theory behind the dinar “revalue” scam was based on the Iraqi dinar once trading as high as 3-to-1 to the U.S. dollar, as the oil-rich nation was economically flourishing before United Nations sanctions sent it plummeting to a fraction of that.

After the U.S. invaded Iraq, “revalue” speculators reasoned that with all of Iraq’s oil being drilled by a government that wouldn’t face the same Western wrath as Saddam Hussein’s regime, Iraq’s currency could return to its past value. That would make a million dinars worth millions of dollars, instead of about $700 at current exchange rates (one dinar is worth .00068 dollars today).

As such, various dodgy currency exchange firms sold hundreds of millions of dollars in dinars under a loophole that allows the money to be bought as a collectible, rather than an investment. Meanwhile, online dinar “gurus” still dispense intel about how the revalue is perpetually just around the corner.

That, though, will never happen. Because Iraq so massively overprinted dinars that such a revalue would destroy the world’s economy, there is no chance that it will ever be brought up to the value of the dollar. In fact, the dinar is actually worth less now than it was five years ago—with no sign that it will ever recover in value.

The dinar scam is a major plank now of the conspiracy theory blob that’s taken over the discourse in America, with the “hopium” dispensed by dinar gurus visible in the drops of QAnon, and Donald Trump fans buying it up by the millions thanks to offhand comments from the former president.

Now, because Russia has vast, untapped oil reserves like Iraq, the ruble would seem like a slam dunk that will eventually go back up in value once the war actually ends.

Russia has more advantages than Iraq. It’s a westernized nation with a huge population, advanced technology, copious minerals, and heavy industry. The sanctions on Vladimir Putin’s government for its invasion of Ukraine will end at some point, and western money and commerce could flow back in just as quickly as it flowed out. Couldn’t this be an opportunity to cash in for someone bold enough to buy a lot of rubles and simply wait out the war?

The ruble is at its lowest value since 2014, when it crashed in the wake of the Russian annexation of Crimea. And it might fall lower still, making buying large quantities of it a major risk. Because of that, there doesn’t seem to be the rush to profit off its potential increase in value as of yet. It’s still very early, though. It took several years after the U.S. invasion of Iraq for dinar speculation to really get going.

But the circumstances behind the war in Ukraine and the U.S. invasion of Iraq are far different. Russia is the aggressor in the war, and its economy is in freefall because the entire west turned against it. Dinar speculation, as unsound as it was, at least was based on the idea that Iraq would eventually have a stable government with a currency to match. It wasn’t wrong to hope that the dinar would eventually be worth more than it was, even if “revalue” notions were pure fantasy.

There’s no sign that Putin’s war is going to end any time soon, or that its outcome will be positive for Russia. It’s entirely possible that things will just get worse as Russia sinks more resources into a war it’s becoming less capable of winning, making the ruble even less valuable.

As such, there’s little sign of foreign currency dealers legitimately selling rubles, and the broker/guru ecosystem that grew around the dinar isn’t there for the ruble for the time being. While buying rubles outside Russia is still legal, it’s clear that virtually nobody is doing it. A survey of nearly a dozen different currency exchange sites shows very few selling rubles, with international sites like Foreign Currency and Coin Exchange, No1Currency, and TravelEx listing them as not on sale or unavailable. Many other sites devoted specifically to selling Iraqi dinars also either aren’t selling Russian currency or have “suspended transactions until things stabilize

And when will “things stabilize” with the ruble? Not as long as the war is raging—and maybe never. Even a slight bump in value can’t really be exploited as an investment. The ruble is nowhere near as overprinted as the dinar, with most cash rubles still available only in Russia and not exported. So there’s very little currency for outsiders to actually buy, and because of sanctions, few legitimate banks outside Russia that will trade it. Russia’s central bank has raised interest rates and limited foreign currency withdrawals in order to keep the ruble from crashing even more, but that doesn’t appear to be working either.

Even the chatter on message boards and social media devoted to financial speculation is mostly warning people off investing in cash rubles to score a quick windfall, while not discounting the possibility that Putin might have something else up his sleeve to restore Russia’s wealth.

Keep in mind many of these doubters have spent thousands of dollars or more on dinars. “I’m invested heavily in one worthless currency, don’t plan on doubling down on another…” wrote one dinar buyer on a thread regarding rubles on DinarVets, one of the biggest online gathering places for “dinarians” to share their hopes and dreams about the “revalue.” Other threads on other dinar boards and news sites had the same message: stay away from the ruble.

Ruble speculation is also being batted down on Quora, where numerous questions about its potential value are being met by expert opinions that Russia’s economy has only begun its freefall.

On Reddit’s outsider investment WallStreetBets, a thread asking if it was “a good time to buy rubles” was met with everything from derision to conspiracy theories that the ruble won’t even exist within a few weeks or months and was never worth all that much to begin with.

Conspiracy theories, of course, go hand in hand with currency speculation. Dinar gurus have been pumping them out for years, to the point where the “secret intel about great event to come” formula has essentially been copied for the QAnon conspiracy theory.

Posts on the QAnon board, GreatAwakening.win allege that Putin is retaliating against sanctions by bringing the ruble in line with the gold standard, or that banning Russia from using international banking systems is only setting up the ruble to be as powerful as the dollar.

Likewise, some dinar boards are indulging in discussions about how the sanctions are just paving the way for Russia to get back to what they see as real money in gold. But there’s no evidence any of this is taking place, and while Russia has huge gold reserves, they can’t sell any of it internationally because of the same sanctions squeezing every other aspect of Russia’s economy.

No discussion of unevidenced financial conspiracy theories would be complete without a mention of NESARA/GESARA—the decades-old theory that a great financial reset will make a few believers rich by wiping away debt and ending income taxes, while unveiling secret technologies and elevating Earth into a Galactic Federation of enlightened beings.

NESARA/GESARA (they’re the same thing) gurus on social media immediately believed Putin’s invasion of Ukraine was the sign that “it”—the great financial reset—was happening, and utopia was just around the corner.

But if there really is a utopian financial plan out there just waiting for the perfect conditions to bring everyone on an equal footing, Vladimir Putin seems an unlikely person to want any part of that, given his own enormous personal wealth.

What Putin and his inner circle likely want is something they’re clearly not going to get—an easy win in Ukraine combined with a magical easing of sanctions. But the economic hit Russia is taking will likely just keep getting worse, making the ruble a less and less appealing investment to anyone looking to make a quick buck.