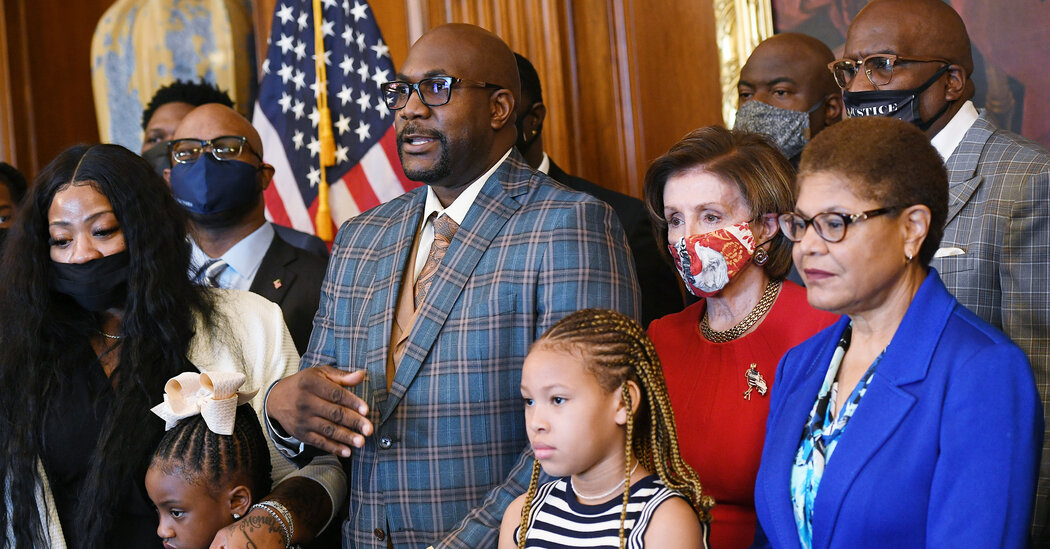 In an April phone call after a former Minneapolis police officer was found guilty of killing George Floyd, President Biden promised Mr. Floyd’s family that he would win passage of a police reform bill in his name.

“That and a lot more,” Mr. Biden pledged that day.

Mr. Biden has so far failed to make good on that promise, even as he met with Mr. Floyd’s family in a private Oval Office session on Tuesday to mark the day when a white police officer pressed his knee on Mr. Floyd’s neck for more than nine minutes, killing him. The officer, Derek Chauvin, was convicted of unintentional second-degree murder, third-degree murder and second-degree manslaughter.

In a speech to Congress last month, the president used the emotional power of Mr. Floyd’s death, and the national movement it helped spark, to urge lawmakers to pass the George Floyd Justice in Policing Act by May 25, the first anniversary of Mr. Floyd’s death. It was, the president implored Democrats and Republicans, a moment to “bend the arc of the moral universe toward justice, real justice.”

But Washington missed the moment.

The legislation bearing Mr. Floyd’s name — which would ban the use of chokeholds, impose restrictions on deadly force and make it easier to prosecute officers for wrongdoing — has languished in Congress as lawmakers spar over a series of issues, including a measure that would alter a legal shield known as qualified immunity that protects police officers in brutality cases.

Though both sides say they are optimistic that a deal may still be possible in the weeks ahead, the stalemate is a reminder for Mr. Biden of the limits of presidential power, and of the deepening lack of any real bipartisanship in the nation’s capital, even in the face of the largest racial justice protests in generations.

“He was a son. He was a father. He was a brother. And we failed him,” Senator Cory Booker, Democrat of New Jersey, said Tuesday on the “CBS This Morning” program. “We have to make progress here. We cannot lose this moment.”

A now-famous video of the killing of Mr. Floyd in Minneapolis, which showed Mr. Chauvin kneeling on his neck for nine minutes and 29 seconds, accelerated a nationwide racial reckoning against police brutality and fueled demands for justice and policing reform. The Biden administration said on Tuesday that Mr. Biden will travel next week to Oklahoma to attend the 100th anniversary of the 1921 Tulsa Massacre.

Before arriving at the White House on Tuesday afternoon, the Floyd family made stops with key lawmakers on Capitol Hill, including Speaker Nancy Pelosi, who renewed her party’s commitment to get a bill signed into law.

“Today is the day that set the world in a rage and people realized what’s going on in America and we all said ‘enough is enough,’” said Philonise Floyd, standing with his family and lawmakers beneath a portrait of George Washington.

Before the meeting, Mr. Biden praised the family on Twitter, saying that Mr. Floyd’s relatives have shown “extraordinary courage” and calling the conviction of Mr. Chauvin a “step towards justice” for Mr. Floyd.

But he added: “We cannot stop there. We face an inflection point. We have to act.”