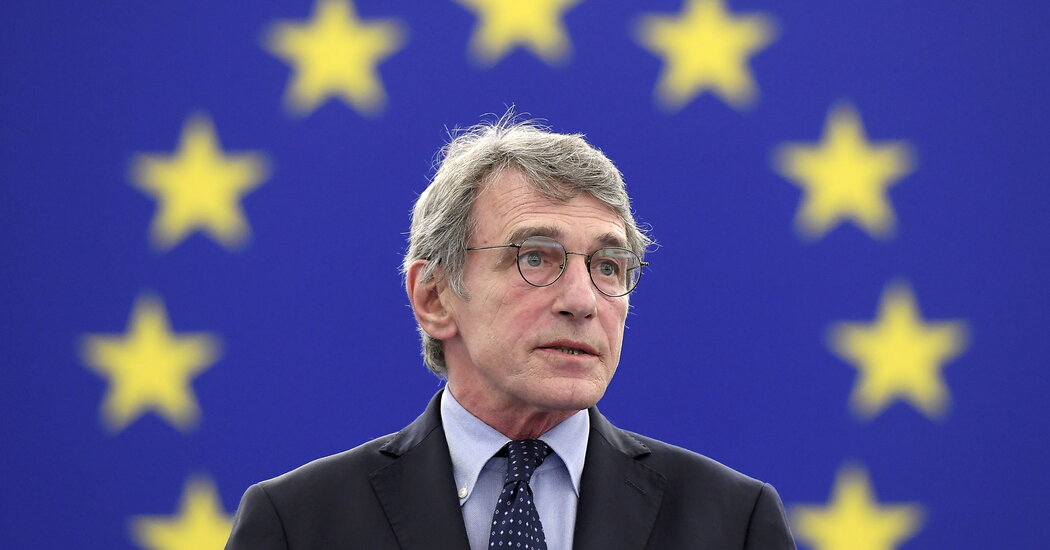 David Sassoli, the president of the European Parliament, died early Tuesday in Italy, his spokesman and the parliament’s office in Washington said. He was 65.

The office said on Twitter that Mr. Sassoli had died in the Italian town of Aviano.

No cause of death was immediately available. But he was hospitalized with severe pneumonia during a plenary session of the Parliament in Strasbourg, France, in September. He later returned to Italy to recover, The Associated Press reported.

Mr. Sassoli was hospitalized again in Italy on Dec. 26 because his immune system was not functioning normally, his spokesman, Roberto Cuillo, said on Monday on social media.

Mr. Sassoli, a member of Italy’s center-left Democratic Party, has been a member of the European Parliament since 2009. He was elected vice president five years later and has led the body since 2019.

Nearly three years ago, he was not a well-known figure outside Italy when he beat Jan Zahradil, a Euroskeptic candidate from the Czech Republic, after two rounds of voting.

Mr. Sassoli’s spokesman said in mid-December that he would not seek a second term, which lasts two and a half years, ahead of a vote scheduled for next week in Strasbourg.

The European Parliament approves or rejects legislation, establishes budgets and supervises a variety of institutions within the European Union. Its 700-plus members serve five-year terms; the next election is in 2024. The Parliament also plays a crucial role in selecting the president of the European Commission, whose members are appointed by national governments.

“Dear David, my thoughts are with you as you fight for your health,” she wrote. “I wish you a speedy and full recovery. Bon courage, as you often say.”

Roberta Metsola, the Parliament’s vice president, wrote on Twitter early Tuesday that she was “heartbroken” by his death.

“Europe has lost a leader, I have a lost a friend, democracy has lost a champion,” wrote Ms. Metsola, a conservative lawmaker from Malta who is running to succeed Mr. Sassoli.

David Maria Sassoli was born in Florence, Italy, on May 30, 1956, according to his website and a short biography published online by his political group in Parliament.

He worked as a journalist before joining the European Parliament. He was married to Alessandra Vittorini and had two children, Livia and Giulio, according to his website.

Mr. Sassoli was a champion of European values and integration. In April 2021, he warned that a verdict by Poland’s constitutional court — which found that the country’s Constitution trumped some laws set by the bloc — had challenged “one of the founding principles of our Union.”

He told The New York Times the same month that he was “satisfied” with the European Parliament’s decision to strip a convicted Greek neo-Nazi lawmaker of his immunity as a member of the body. (The lawmaker, Ioannis Lagos, was later extradited to Greece from Brussels to serve a 13-year prison term.)

In October, Mr. Sassoli praised Aleksei A. Navalny, the jailed Russian opposition leader, for having “fought tirelessly against the corruption of Vladimir Putin’s regime.”

“This cost him his liberty and nearly his life,” he wrote on Twitter, after the European Union gave Mr. Navalny its top human rights award. “Today’s prize recognizes his immense bravery and we reiterate our call for his immediate release.”

In his last Twitter message, on Jan. 1, Mr. Sassoli called the euro “a symbol of peace and integration, the coming to fruition of a historic political vision, of a united continent with a single currency for a single market.”