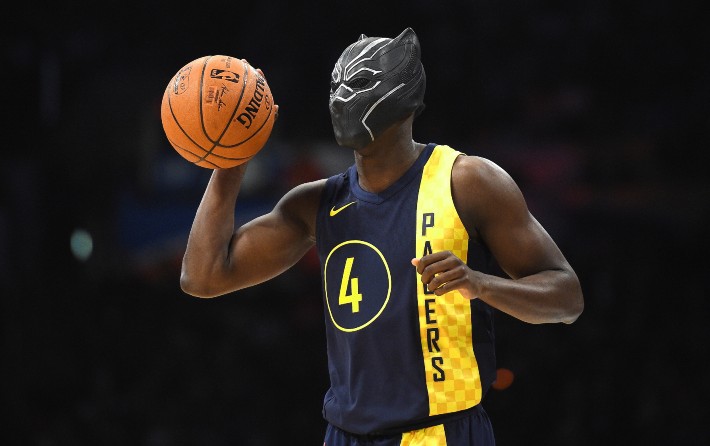 Friday was apparently a day to express your frustration with Disney online, for one reason or another. Whether you’re upset that the Disney theme park experience is becoming too “woke” or you don’t like Marvel superheroes getting in the way of your enjoyment of a basketball game, there was truly something for everyone to get slightly miffed about online.

Animatronic sex slave auctions aside, what got hoops fans riled up was an announcement made by ESPN that it would show a Warriors-Pelicans game next month with a supplemental broadcast that involved some Marvel tie-ins during the interactive broadcast. Nothing will change with the regular broadcast, but one airing on ESPN2, ESPN+ and ESPN Deportes will be a “groundbreaking collaboration” called Marvel Arena Of Heroes.

The pitch is, well, a bit odd and synergistic, but if it strikes you as weird there’s a whole other broadcast to watch on May 3 at 7:30 PM. Via Marvel:

After a narrow victory over an invading alien army, the Avengers receive an ominous threat from the enemy who vows to return in greater numbers and force. The Black Panther and Iron Man quickly realize they will need more help and form a plan to expand their ranks to fight this impending threat. Recognizing the superior physical abilities, agility, and tenacity of Earth’s greatest athletes, the Avengers will hold a series of contests where the winners earn the right to train and fight alongside them as Marvel’s Champions! The Avengers will begin their recruitment with the NBA elite and observe the battle between the Warriors and the Pelicans, focusing on three star players from each team.

It’s a bit much, sure, but as anyone who may have attended a minor league baseball team’s Star Wars night can tell you, it’s not awful storytelling. Basically the broadcast will turn the game into a mini-game of sorts that doubles as a big boss battle. Players will have their actual plays and stats turned into points, and whoever gets the most fake points in the real basketball game gets a prize. Those players are, as follows: Steph Curry, Draymond Green and Andrew Wiggins for Golden State, and Zion Williamson, Lonzo Ball and Brandon Ingram for New Orleans.

It’s sort of like the Nickelodeon broadcast that the NFL did earlier this year, which was actually a hilariously delightful experience where Nate Burleson shined. It’s fair to be a bit more cynical about this given all the Disney and Marvel tie-ins here, but it seems ultimately harmless. But not to a considerable amount of NBA fans who were generally outraged that the league would attempt something this silly.

[nfl does nick broadcast]
“do what the nfl is doing, try to reach the kids where they are!”

[nba does marvel broadcast]
“just talk about the game!” pic.twitter.com/XgkTr4UYZj

Watching the same folks who praised the NFL for their Nickelodeon broadcast during a wild card game, crap on the NBA for attempting to do the same thing with Marvel is HIGH comedy…

It is, admittedly, a lot. But it’s not exactly a shock to see Disney try to leverage all of its properties and see people get mad about it in the process. Gamifying a game to fight comic book crime is a lot more cynical than having exploding slime cannons in the end zone of a football game broadcast on a children’s cartoon network, but the solution for detractors of that broadcast is the same as the answer here: just watch the main feed and ignore the memes online.