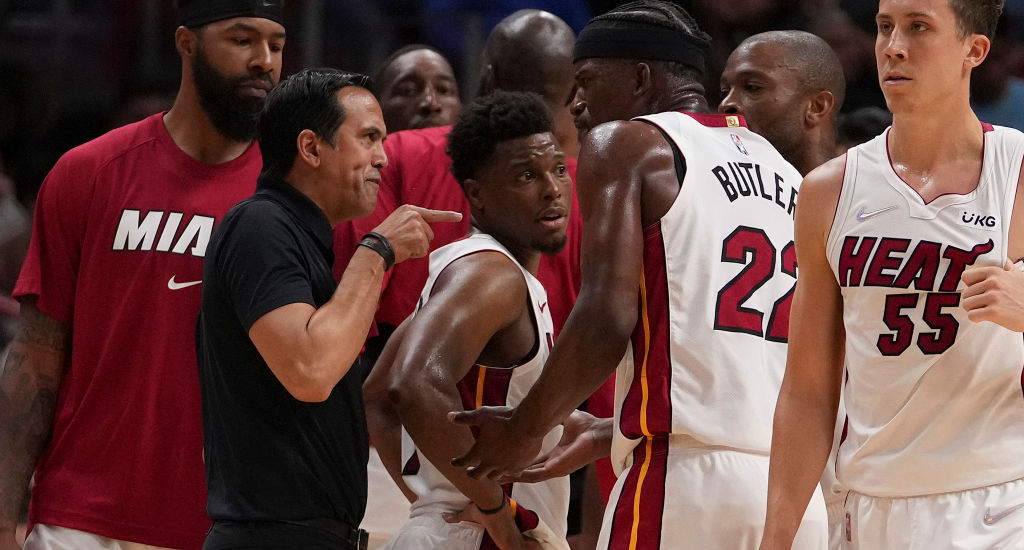 The Miami Heat suffered their second consecutive loss on Wednesday night in rather embarrassing fashion, as after dropping a game to the Harden-less and Embiid-less Sixers, they lost to the Warriors who were resting Steph, Klay, and Draymond.

The low point was a timeout in the midst of a 19-0 run from Golden State to open the third quarter in which Udonis Haslem had to be physically restrained from Jimmy Butler, while coach Erik Spoelstra was also hot with his star player. That moment was, unsurprisingly, a focal point during and after the game. Spoelstra’s press conference opened with a question about that huddle and at first joked that it was everyone trying to make dinner plans, before brushing it off as a competitive group letting out some anger and frustration with back-to-back games with poor play.

Kyle Lowry also shrugged the incident off as “passion” and, like Spoelstra, insisted it was just competitive guys being frustrated at their rough patch — and noting that he and the Heat’s top stars simply needed to play better.

This was always what they were going to say after, but this wasn’t your normal bench argument. Jimmy very clearly said something that had to have crossed a line, because the reaction from Spoelstra — “you want me to f**king fight you?” — and Haslem — “I’ll beat your ass.” — is not exactly something you see often (also, PJ Tucker’s face indicates Butler said something pretty wild).

What’s most important is how the Heat handle adversity come playoff time, because these types of moments don’t exactly tell the story of a team that will do particularly well if they lose a couple games during a series. That has to change in the next few weeks if the Heat are going to compete for a championship, as it’s one thing for there to be passion and competitive fire but another for the coach to be so mad at something a player said that he’s coming after him and flinging folders of papers onto the court.