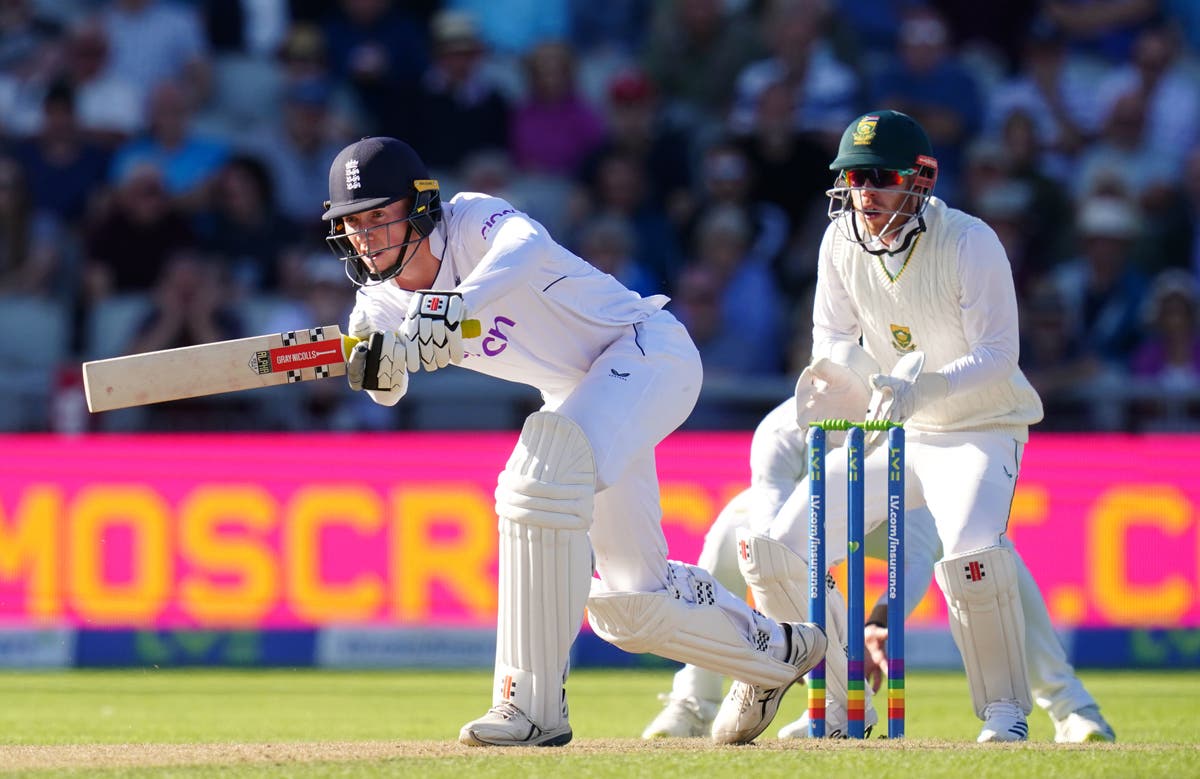 England are taking on South Africa on day one of the second Test today and Ben Stokes’s side are looking to bounce back from a comprehensive defeat at Lord’s. The South African bowling attack ripped through the English batting line-up, led by the pace of Kagiso Rabada, Anrich Nortje, Lungi Ngidi and Marco Jansen, and England must come up with a way to stem the loss of wickets at Old Trafford this week if they are to level the three-Test series.

England make one change with Ollie Robinson coming into the bowling attack to add height and bounce, with Matthew Potts dropping out. Zak Crawley retains his place in the starting XI despite his continued struggles as opener, with Harry Brook waiting in the wings and tipped for a call-up for the third and final Test should Crawley falter once more here. South Africa make one switch, bringing in a second spinner – Simon Harmer – in place of seamer Jansen.

Who will win the second Test in Manchester? Follow all the latest score updates and live commentary from Old Trafford below.

Too short from Maharaj, allowing Root’s fast feet to shuffle into position for a firm pull through square leg for four.

Keshav Maharaj will continue from the other end having come so close to dismissing Crawley in his first over. Ollie Pope, by contrast, was comprehensively cleaned up.

South Africa put in a deep backward point immediately for Joe Root, looking to prevent any leakage of unnecessary runs in the former England captain’s favourite scoring area. Another savage nip-backer troubles Root’s thigh pad before a push into the off-side gets him off the mark.

Beaten for pace and Ollie Pope’s furniture is rearranged! After another slightly wayward start Anrich Nortje is back firing them down, typically skiddy and causing Pope problems. A length ball nips back at the batter again, taking a chunk of his outside edge as Pope loses balance lunging for it and cannoning into the top of the pegs.

Pope, who had looked solid, trudges off.

Turn for Keshav Maharaj, beating a pretty nervy defensive stroke from Zak Crawley, who is saved by the extra bounce in the surface from the brand new ball. Oooh – on replay that looks rather tighter. Dean Elgar elects not to review.

What does ball tracking say? Umpire’s call! Close, but it would have remained not out.

Keshav Maharaj into the attack

A twin change – Keshav Maharaj will fire down some left-arm darts, having done for both of these two early in the second innings at Lord’s, and with South Africa, of course, shorn of a fourth seamer. A slip and a short leg to start with to Crawley.

Nortje’s response is three balls above 90mph that jag back at Pope, who hops about on hot coals.

Edged, but short of the slips! Those three cause Pope to grope at a length ball outside off stump, but the ball fails to carry to Simon Harmer, taking a piece of the spinner’s fingernail on its way to the third man boundary. Lively.

Pope welcomes him with a boundary! Short outside off but shooting low, and Pope chops down on it nicely.

Another! This one does get up, allowing Pope a more certain flow of the bat through the ball. Fine of the point fielder and four more…

Pope is sharply on to a back-of-a-length ball, recognising an opportunity to pull to the leg side and take two to the man at fine leg. That’s good from the Surrey batter, too, once more calling Crawley for a tight but just single.

A first bowling change. Ready the radars – it’s Anrich Nortje’s turn to crank it up…

Signs that Kagiso Rabada may just be settling into his rhythm as he tests the protective qualities of both of Crawley’s thigh guards with his pace up above 85mph for the first time in the innings. Rabada is interested in reviewing his second nip-backer, but draws little support from his teammates.

Another nice shot from Ollie Pope, leaning on a cover drive as Rabada pushes too full. He scampers back for three.