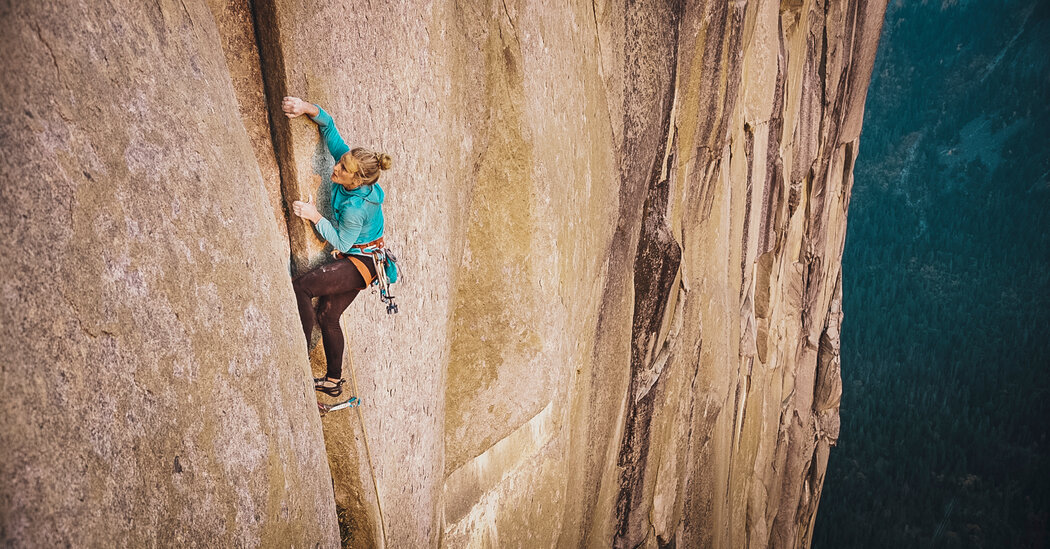 The climb went smoothly until she attempted a difficult pitch in the sun around noon on Wednesday. Her fingers were so slick with sweat that she slipped off, she said, so she rested for 30 minutes and tried again. She slipped off again, this time smacking her head against the wall as she swung on the rope. Suddenly, she said, there was “blood everywhere, spewing out from my head.”

She flashed back to a brutal fall she suffered last year while attempting the same climb, one that sent her to a hospital. But after checking her vital signs and bandaging her head, she put her hands on the rock once more.

Ms. Harrington, who grew up in Colorado, has been climbing since she was 10. She is a five-time sport climbing U.S. national champion and a two-time North American champion. She scaled Mount Everest and Mont Blanc in 2012, and Ama Dablam in 2013.

Free-climbing El Capitan, she said, requires strength, stamina, technical skill and the fitness to endure a day of exertion.

It’s unclear how many people in total have free-climbed El Capitan in under 24 hours, but the American Alpine Club, a climbing organization, estimates that only 15 to 25 climbers have pulled it off. The first to do so was Lynn Hill, whose scaling of El Cap in 1994, following the Nose route, remains one of the most famous ascents in rock climbing.

Free-climbing El Cap is still very much “a male-dominated thing, despite the fact that Lynn was the first to do it,” Ms. Harrington said. “I always received so much advice from men, people telling me how I should do things, how I’m doing it wrong, but in the end I just decided to do it anyway despite the fact that a lot of people felt that maybe I couldn’t or maybe I didn’t belong there.”