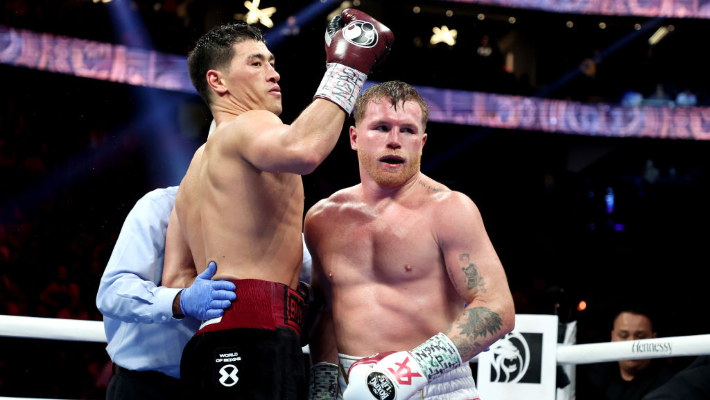 Canelo Alvarez entered Saturday night 57-1-2 in his illustrious career, with his only career loss coming 17 fights ago to Floyd Mayweather. However, Canelo was stepping into just his second fight at 175 pounds against WBA light heavyweight champion Dmitry Bivol, having previously knocked out an aging Sergey Kovalev in 2019 before returning to super middleweight for his next four fights, unifying the 168 pound belts. Even so, Canelo was a -600 favorite in the bout against the bigger Bivol, who had his eye on a stunning upset.

After coming out of the gates strong in the early rounds with some powerful uppercuts, it became apparent that the size differential was going to pose real problems for Canelo, who simply could not push Bivol back in the fight. Alvarez, used to being the aggressor, found himself stymied by Bivol’s strong guard and, as Canelo seemed to get tired, Bivol pressed forward with a consistent, strong jab and began to pepper Alvarez with shot after shot, battering Canelo’s face in the middle rounds.

The late charge fans in Las Vegas were hoping for from Canelo never arrived, as Bivol stayed the course and continued to lean on the smaller Alvarez, keeping a solid workrate but never providing the opening for a big counter to swing the fight back in Alvarez’s favor. The bout went all 12 rounds, with the two sharing a quick embrace and show of respect after the final bell.

All three judges ringside scored the bout 115-113 in favor of Bivol, which some felt was not as indicative of the dominance showed by the champion, but it was the correct decision, even if a bit narrower on the scoring than some had hoped for. With the win, Bivol cements his place atop the light heavyweight division and earned plenty of respect from around the boxing world with a truly impressive performance against the pound-for-pound king.

For Alvarez, one would think this will cap his pursuit of belts to the 160 and 168 pound divisions, as the size differential in this fight proved to be too much to overcome. His early uppercuts were the types of punches that would’ve rattled middleweights but Bivol was able to eat them and stay in against Alvarez, wearing him down with the jab and tight, surgical combinations to pile up round wins. Weight classes exist for a reason and while Canelo impressed in his 175 pound debut, taking on a light heavyweight in his prime proved to be too much for him.

He’ll get a chance at redemption soon, as he has a rematch clause he plans on using, but based on this fight there’s plenty of work to do for him to close the gap of the bigger Bivol.