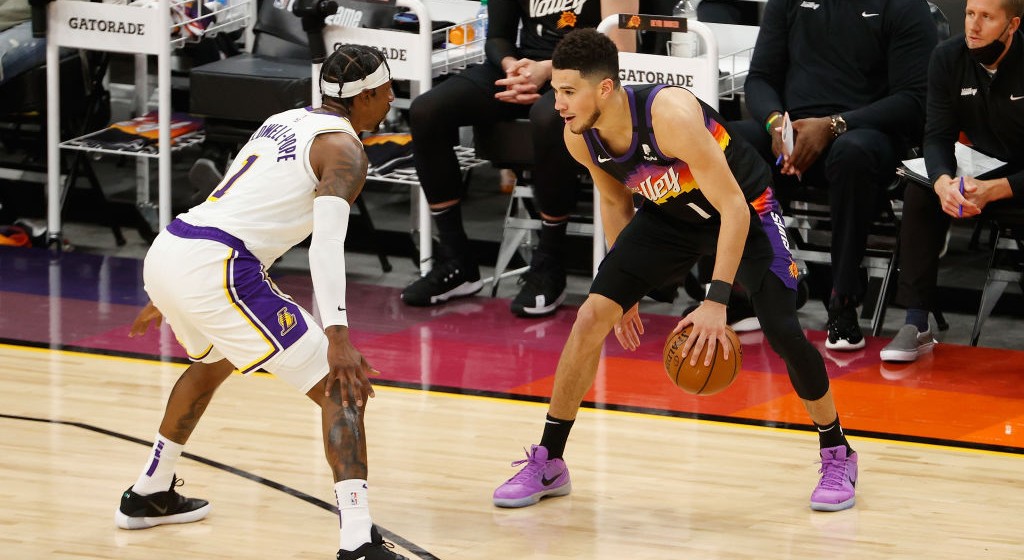 From the opening tip, the Phoenix Suns played with an incredible amount of energy and effort in Game 1 of their first round series against the Lakers. It was a series that looked on paper more like a conference finals matchup than a first round matchup, and the opening game delivered in the drama category, for sure.

After a hellacious start, the Suns saw Chris Paul go down with a shoulder injury that he would return from but never look like his normal self. Paul had just seven points and eight assists on 3-of-8 shooting as he was clearly unable to shoot right after the injury, but he was still a +6 on the afternoon, guiding the team with his craftiness and intelligence rather than his ability to score himself.

Luckily for Paul and the Suns, their two young stars were more than up for the challenge of taking on that scoring load, as Devin Booker made his long-awaited playoff debut with a remarkable 34-point performance, going 13-of-26 from the field, to go along with eight assists and seven rebounds, and absolutely took over down the stretch in what became a 99-90 Suns win.

Alongside Booker was Deandre Ayton, who the Lakers had no answers for in the paint. The big man had 21 points and 16 rebounds, eight of which came on the offensive end, and he was monstrous and efficient, getting his 21 points on 10-of-11 shooting.

Across from Phoenix was a near no-show from the Lakers, as Anthony Davis had a dismal outing with just 13 points and seven rebounds, as there were long stretches of action where you could completely forget he was on the floor. Andre Drummond had 12 points and nine rebounds, but was attacked consistently by the Suns in pick-and-roll and was a net negative. LeBron James had 18 points, 10 assists, and seven rebounds, but was just 6-of-13 from the field and didn’t assert himself as we are accustomed to. All told, the Lakers shot just 43.4 percent from the field, 26.9 percent from three, and a horrific 60.4 percent from the free throw line, which was the one area they held an advantage on Sunday, getting 28 attempts compared to just 12 from Phoenix.

There were a few signs of life at various points as the Lakers would make a brief push, but each time they did the Suns had the answer with key stops and big buckets. Emotions were high even if neither team shot as well as they’d like to, and we even got our first kerfuffle of the playoffs with Cam Payne getting tossed for throwing the ball at Alex Caruso.

As we have all learned in watching LeBron James-led teams over the years, Game 1 isn’t indicative of anything, as they looked flat against the Blazers in Game 1 last year as well before steamrolling Portland. That said, this Phoenix team is better than that Portland squad and will likewise feel like they have more to give, particularly if Chris Paul can shake off his shoulder issue for Game 2. The Lakers, meanwhile, will have plenty of adjustments to make and one would expect a different look from them, both in effort and in their rotations.