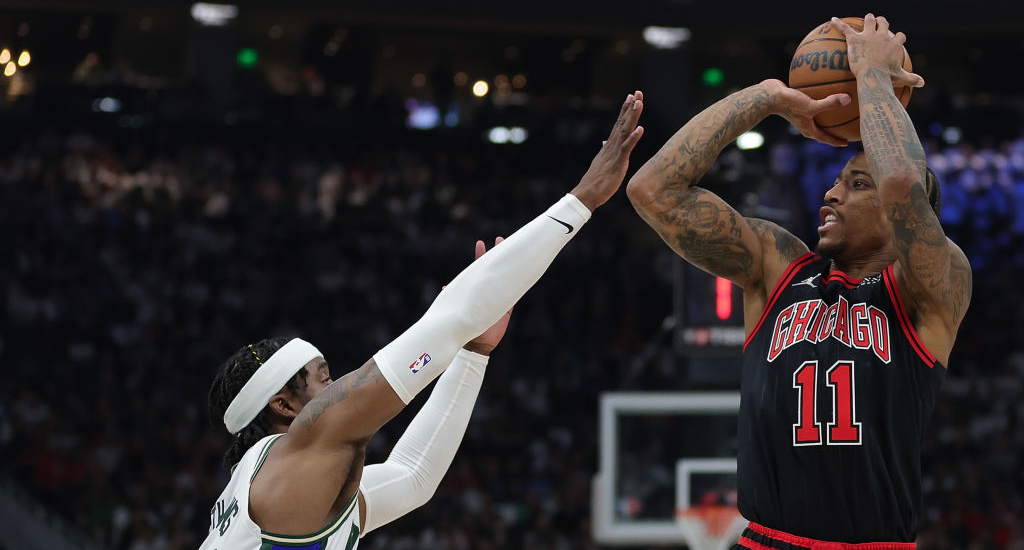 Game 1 of the series between the Bulls and Bucks went about as expected, with Milwaukee jumping out to a big lead early, but a resilient Bulls team hanging around and making things interesting before the reigning champs slammed the door shut.

When Game 2 started, it was the visitors that got busy from the jump this time around, as Chicago came out much more engaged, letting some swarming defense (and sloppy play from the Bucks) fuel a 9-0 start to the game.

Milwaukee would settle down from there and got back into the game, taking a brief lead and trailing by just one after the first quarter, but the Bulls weren’t deterred. A theme throughout the game was strong three-point shooting from the entire Bulls roster, as they shot 48 percent from deep on the night, with seemingly everyone getting in on the act in the first half.

Chicago would extend their le ad at the outset of the third, as Nikola Vucevic continued his excellent play this series, winning the matchup with Brook Lopez down low.

The Bucks went on the expected run, though, as Khris Middleton got hot from three and Giannis Antetokounmpo asserted his will, cutting the Bulls lead down from 18 to as few as three.

It looked like the Bulls might fold and become the third lower seed of the night to blow a 17-point advantage, but DeRozan simply would not allow it, as he took control in the closing minutes of the third and the start of the fourth to push the Chicago lead back up to 16 in short order.

Milwaukee again punched back, but as they were getting things back to single-digits they saw their No. 2 scorer leave the game with knee soreness that kept him out for the rest of the game — after losing Bobby Portis in the second quarter after he got hit in the eye. Jrue Holiday would step up, hitting a couple big threes and getting the lead down to five, but blew an open layup to cut the Bulls lead to three that Vucevic followed up with a three to stem the tide once again.

The Bucks would get the lead down to three on a Brook Lopez and-1 layup with just over a minute to play, and twice forced misses from the Bulls on the other end but Alex Caruso and Vucevic got huge offensive rebounds, the latter of which tipped out to DeRozan who put the game on ice with a tough finish through contact to reach 41 points.

It was fitting that it was DeRozan, Vucevic, and Caruso that put the game on ice, as they were vital for the Bulls in the win — with Caruso drawing a game-sealing charge on Giannis with 4.9 seconds to play. DeRozan finished with 41 points, seven rebounds, and four assists, while Vucevic chipped in 24 points and 13 boards, with Caruso only scoring nine but dishing out 10 assists and providing sensational defense, including two blocks and two steals. Zach LaVine let his co-star cook on the night, taking a backseat on offense but provided aid when called upon with 20 points on 13 shots.

For the Bucks, Giannis was his usual sensational self with 33 points, 18 rebounds, and nine assists, and Brook Lopez had some big buckets down the stretch to reach 25 points. But the injury to Middleton put a damper on Milwaukee’s offensive explosiveness down the stretch, as they simply could not hit enough threes without him on the floor to reel in the Bulls — non-Middleton Bucks were 9-of-29 from three on the night. The bench unit, in particular, struggled, going 1-of-10 from three and with Middleton and Portis’ status for Game 3 in question, things are suddenly very interesting in a 1-1 series.

The Bulls will gain a tremendous amount of confidence from this win, as DeRozan was simply unguardable by anyone on the Bucks, including Giannis, and Vucevic continues to play some of the best ball of his season at the right time. When they are able to knock down threes around DeRozan, they give themselves a chance thanks to quality defense on the other end and the United Center will be very loud when they come back home for Game 3 all knotted up at a game apiece.