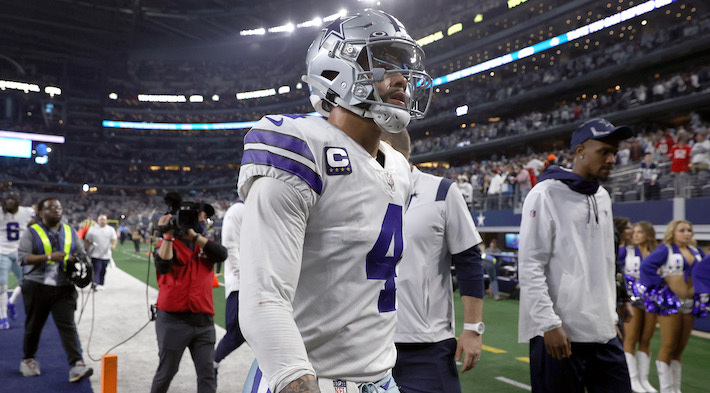 The Dallas Cowboys saw their season come to an end on Sunday at the hands of the San Francisco 49ers. Despite entering the game with a highly-flying offense, an aggressive defense, and a belief that the team had the pieces in place to make a run at the Super Bowl this year, the Cowboys just could not figure out the Niners, and as a result, they lost, 23-17.

The end of the game led to some controversy, as Dallas called a draw with Dak Prescott with 14 seconds remaining despite being out of timeouts with the hopes he’d be able to pick up some yards, spike the ball, and have a reasonable distance to throw into the end zone. But things worked out so that the referee couldn’t spot the ball in time, meaning the clock ran down to zero before he could spike it.

In the aftermath, Prescott gave “credit to” Cowboys fans for throwing debris at the officials. Unsurprisingly, he caught some flak for this, and on Tuesday evening, Prescott tweeted out an apology to the refs for what he said.

I deeply regret the comments I made regarding the officials after the game on Sunday.

I was caught up in the emotion of a disappointing loss and my words were uncalled for and unfair.

I hold the NFL Officials in the highest regard and have always respected their professionalism and the difficulty of their jobs.

The safety of everyone who attends a game or participates on the field of a sporting event is a very serious matter.

That was a mistake on my behalf, and I am sorry.

Prescott struggled against San Francisco’s defense, going 23-for-43 for 254 yards with a touchdown and an interception on the day. He also carried the ball four times for 27 yards, with 17 of those coming on the draw that ended up being the final play of the Cowboys’ season