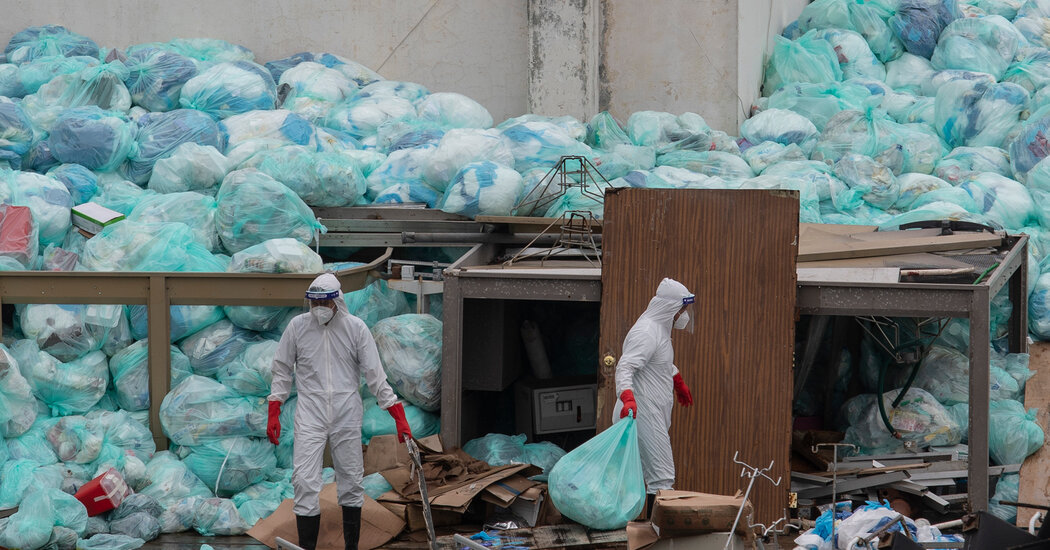 Across Brazil, recycling plants stopped running for months. In Uganda, a junkyard is short on reusable plastics. And in Indonesia’s capital, disposable gloves and face shields are piling up at a river mouth.

Surging consumption of plastics and packaging during the pandemic has produced mountains of waste. But because fears of Covid-19 have led to work stoppages at recycling facilities, some reusable material has been junked or burned instead.

At the same time, high volumes of personal protective equipment have been misclassified as hazardous, solid waste experts say. That material often isn’t allowed into the normal trash, so a lot of it is dumped in burn pits or as litter.

Experts say a problem in both cases is that an early fear — that the coronavirus could spread easily through surfaces — has created a hard-to-shake stigma around handling perfectly safe trash. Many scientists and government agencies have since found that the fear of surface transmission was wildly overblown. But old habits die hard, especially in countries where waste-disposal guidelines haven’t been updated and officials are still preoccupied with fighting fresh outbreaks.

“Because there isn’t a route of transmission through recycling, say, we are still finding things being burned rather than recycled because people are scared” of surface transmission, said Anne Woolridge, who leads a working group on health care waste for the International Solid Waste Association. “You try to educate the entire world’s population in less than a year. It’s impossible.”

As for personal protective equipment, Dr. Woolridge said, the sight of gloves and masks littering the world would have been unthinkable before the pandemic. “But because everybody’s saying anything to do with the pandemic is a medical waste, it’s put pressure on the system,” she added.

Recycling rates dropped sharply around the world last year, in part because demand from manufacturers fell. In many countries where the recycling industry is still driven by hand sorting, rather than machines, in-person work was suspended out of virus-related fears.

In Brazil, for example, the generation of recyclable material in cities rose 25 percent in 2020, primarily because of a spike in online shopping, according to Abrelpe, a national association of sanitation companies. But recycling programs in several cities suspended operations for several months anyway, citing fears of surface transmission.

That had clear human and environmental costs. A recent study found that during the suspension period, at least 16,000 fewer tons of recyclable material than usual were in circulation, representing an economic loss of about $1.2 million per month for waste-picker associations. Another study said a month of suspensions was a missed opportunity to save the amount of electricity used by more than 152,000 households.

“The suspension highlighted our system’s weaknesses,” said Liane Nakada, a co-author of the second paper and a researcher at the University of Campinas. She and her husband stored their recycling at home for months to avoid discarding it improperly, but they were the exception.

“The numbers are getting back to normal and we’re pivoting away from a Covid discussion to one of ‘OK, let’s get back to circularity, sustainability, plastics recycling,’” Mr. Michelsen said.

But in countries where recycling is driven by informal collectors, he added, lockdowns and outbreaks are still creating major disruptions.

Before a recent Covid outbreak hit Kampala, Uganda, hundreds of people would gather to pick through plastics at a city dump. They would then sell the plastics to middlemen, who later sold it to recycling companies.

But when the country went into a lockdown this summer, restrictions on movement prevented trucks from picking up trash in some districts. There were also fears of surface transmission: Officials said Covid was surging because people hadn’t been washing their hands.

As of this month, only about a third of the usual number of waste pickers were at the Kampala city dump, said Luke Mugerwa, a representative for a local pickers’ group. Some manufacturers who came looking for recovered plastics were out of luck.

“Every day, they are always looking for plastics to buy,” Mr. Mugerwa said. “The demand is there but the supply is very low.”

Another challenge is the used personal protective equipment that has flooded the world since the early days of the pandemic. About eight million metric tons of plastics already enter the ocean every year, and experts fear that used P.P.E. and other litter could make that situation even worse.

Most P.P.E. is not hazardous, but many countries still classify it as such, said Mr. Michelsen of the International Finance Corporation. That means used gloves and masks are often lumped together with truly hazardous medical waste and either treated at great expense — a waste of money — or disposed of through other means.

Understand Vaccine and Mask Mandates in the U.S.

“If you have high volumes coming out the back of your hospitals in these areas that don’t have infrastructure, they’re just going to set fire to it,” Dr. Woolridge said.

The United Nations Environment Program estimated last year that health care facilities around the world were producing about 7.5 pounds of Covid-related medical waste per person per day worldwide. It said that in Jakarta, Indonesia, and four other Asian megacities, the rate of overall health care waste disposal had risen by about 500 percent.

Some of that waste inevitably ends up as litter. In the Indonesian capital, prepandemic pollution surveys of a local river mouth by the Research Center for Oceanography did not turn up much P.P.E. But a recent survey found that equipment like masks, face shields, gloves and hazmat suits accounted for about 15 percent of the pollution.

“Even in Jakarta, which has the country’s biggest budget for environmental management, the waste is still leaking into the environment,” said Muhammad Reza Cordova, a scientist involved in the river surveys. “What about other areas with smaller budgets?”

A hunt for syringes

An emerging concern is that, as the flood of material creates new pressures on local authorities, syringes and other truly hazardous medical waste may end up in the wrong places.

In the world’s poorest countries, that would pose a health risk to waste pickers. Tens of thousands of people already scavenge in landfills in Bangladesh, for example. But only three or four of the country’s 64 districts have facilities to safely dispose of used syringes, said Mostafizur Rahman, a solid waste expert in the capital, Dhaka.

“These landfills are not secure or sanitary, so it’s really concerning in terms of environmental health and safeguards,” said Dr. Rahman, a professor of environmental sciences at Jahangirnagar University.

And because syringes and vaccine vials are a valuable commodity on the black market, criminal gangs have an incentive to steal vaccination gear and illegally resell it into the health care system.

Late last year, Interpol warned that the pandemic had already “triggered unprecedented opportunistic and predatory criminal behavior” around the theft, falsification and illegal advertising of Covid-19 and flu vaccines. The warning came before most of the world’s population had even received a Covid shot.

“It’s a real issue in the marketplace,” Mr. Michelsen said. “These vials have a huge black market value because you can fill them with whatever you want and sell them.”