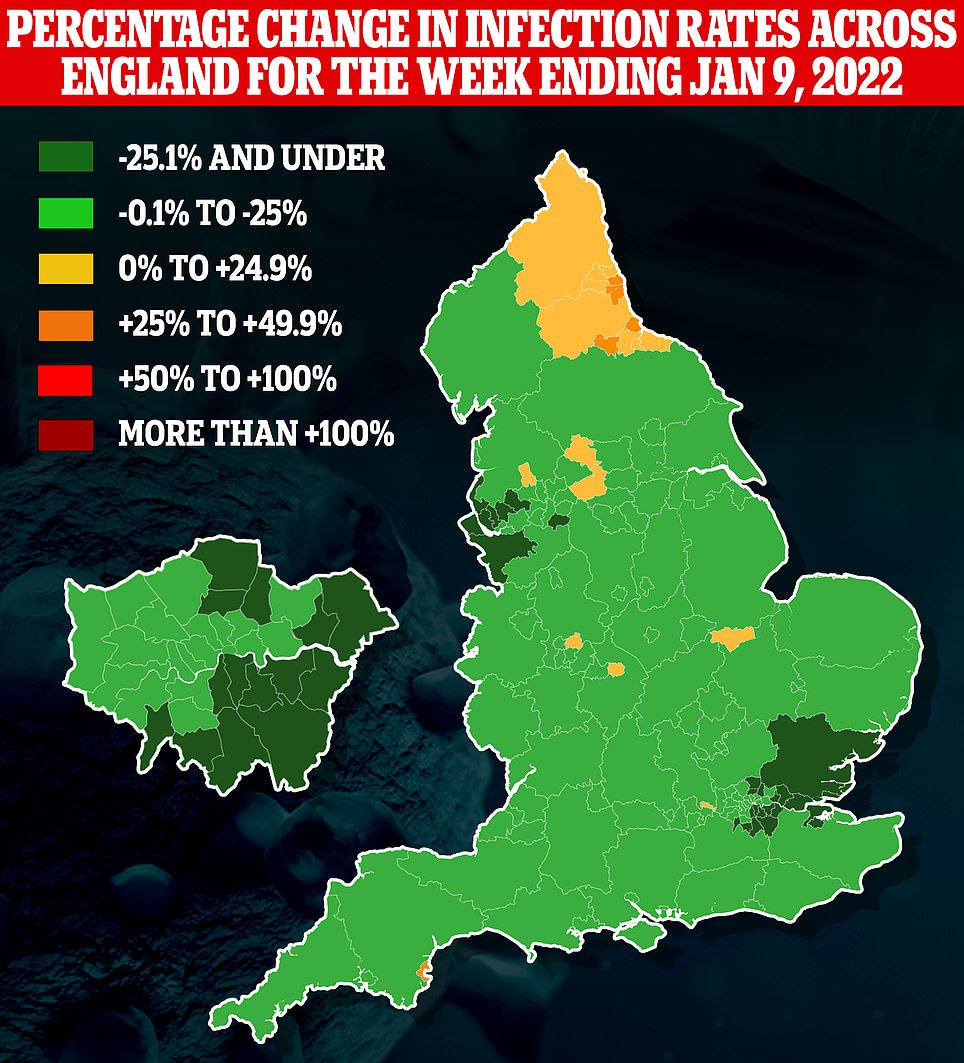 UK Health Security Agency (UKHSA) confirmed infections fell by at least 12 per cent in all areas of the country during the week up to January 16.

Meanwhile, King’s College London scientists estimated 144,527 people were catching the virus on any given day in Britain in the week to January 17, down from 183,364 in the previous seven-day spell. Outbreaks are shrinking in Scotland, Wales and Northern Ireland as well as every region of England, while cases are falling in every age group except under-18s because of the ‘back to school’ effect, the survey found.

The findings are in line with the Office for National Statistics’ weekly infection survey which also found Covid cases plunged in England by a fifth last week.

Professor Tim Spector, who leads the symptom study, heralded the encouraging trend but urged the nation to be ‘sensible’ because cases remained high.

Boris Johnson lifted work from home guidance and face masks in secondary schools today after taking confidence from the Covid data that the worst of Omicron is over. Vaccine passports, face masks and other ‘Plan B’ curbs are set to expire from next Thursday, and the legal requirement to self-isolate if you test positive is to be dropped from March 24 under No10’s ‘exit strategy’.

But Health Secretary Sajid Javid sounded a cautious note today, saying he would continue to wear a mask in shops because Covid cases remained high. He also said they would be ‘sensible’ to use on the London Underground.

The weekly falls in the ONS and King’s College studies bring them in line with Government dashboard data, which shows daily cases have dropped week-on-week for 14 days in a row.

There are also signs the country is past the peak of hospitalisations, with daily admissions hovering at around 2,000. The number of patients in intensive care has dropped to pre-Omicron levels and Covid deaths are rising slowly, with an average of around 270 per day.

King’s College London scientists estimated one in 27 people in the UK were now infected with Covid. This was down to

Commuters head to work as WFH is scrapped

Commuters in England headed back into offices today after Boris Johnson dramatically scrapped all Covid Plan B restrictions – although city centres are unlikely to get back to normal for some time with some companies expected to wait months before bringing staff back in.

Road congestion levels in London were at 72 per cent in the morning rush hour between 8am and 9am today, slightly up from 71 per cent yesterday but a bigger rise on 66 per cent last Thursday, according to TomTom.

But it was more a mixed picture in other cities, with rush hour morning congestion in Birmingham, Leeds and Newcastle down compared to yesterday and last Thursday – while the figure in Manchester and Sheffield was down from yesterday but up on last Thursday.

Transport for London said Underground usage this morning to 10am increased by 8 per cent compared to last Thursday, with 1.09million entries and exits, while buses were up 3 per cent in a week with 1.19million taps.

The Prime Minister has demanded civil servants get back to the office and set an example to the country after lifting working from home restrictions yesterday – but they appear to still be avoiding going into work.

When pressed by MailOnline if staff have returned to the office, a Home Office spokesman confirmed he was still WFH. He refused to say if he has received an email from senior mandarins telling civil servants to come back to Whitehall. He added that guidance throughout the pandemic had explicitly discouraged civil servants from ‘coming into the office under any circumstances’.

The Department of Health and Social Care refused to say if staff have returned to the office. A spokesman from the FDA union representing civil servants did not know if mandarins had been instructed to come back in.

It comes as FDA general secretary Dave Penman tweeted today: ‘It’s insulting because the PM said ‘back to work’ when everyone’s continued to work hard whether from home or the office. And it’s a strange world when Tory ministers feel able to lecture private enterprise on how to run their businesses.’

The King’s College London study — which is also run by health data science company ZOE — is based on daily reports from more than 800,000 Britons on their symptoms and around 46,000 test results.

Broken down, one in 26 people were estimated to have had Covid in England and Northern Ireland in the most recent week.

They were followed by Wales, one in 30, while Scotland had the smallest outbreak, one in 35.

Professor Spector, an epidemiologist at King’s College, said: ‘It’s great to see cases falling rapidly. In just two weeks, the number of new cases per day has fallen around 31 per cent from its peak of over 211,000 to under 145,000.

‘New cold-like symptoms are now again slightly more likely to just be a cold and not Covid.

‘While it is easy to think the worst is over, our health service is still not functioning properly, and complacency will inevitably lead to trouble. The ZOE data is already showing an uptick in symptomatic cases in children due to the back to school effect.

‘With cases still high and restrictions being lifted, we’ll just have to hope that people remain sensible, their households are triple vaccinated, and regardless of official advice, that everyone knows to isolate and self test when experiencing cold-like symptoms.’

Amid the lifting of work from home guidance, traffic levels on London’s roads ticked up six per cent this morning compared to the same time last week.

And the number of people on the London Underground rose by eight per cent.

Face masks have been lifted in schools from today, and will be lifted in shops and on public transport from January 26.

But London Mayor Sadiq Khan has said they will still be compulsory on Tubes and buses in the capital.

The Health Secretary accepted that masks were necessary in busy enclosed spaces like a local shop or on the Tube, as he said he would continue to wear one for at least the next week because cases remained high.

Mr Javid told BBC Breakfast: ‘Will I be wearing a face mask? Yeah, I think I probably would be in a week’s time.

‘Because prevalence is still high and there will be people there, especially if I am going to my local shop which is small and enclosed and can have quite a few people in there at one time in quite a small space, I don’t know most of those people, I think that would be sensible.

‘I think it will be sensible on the tube in London, for example – quite an enclosed space.

‘People will be asked to make their own personal judgment just as we do in fighting flu.’

He said he planned to allow the rule to lapse on March 24 and said that date could be brought forward if the situation remains stable.

The PM told MPs in the House of Commons more than 90 per cent of over-60s across the UK had now had booster vaccines to protect them, and scientists believed the Omicron wave had peaked.

He said the Government had taken a ‘different path’ to much of Europe and the ‘data are showing that, time and again, this Government got the toughest decisions right’.

It comes after Office for National Statistics’ weekly report yesterday found cases had plummeted by a fifth in England last week in yet more confirmation that Omicron is on its way out.

The gold standard report found around 2.9million people were infected on any given day in the week to January 15, a ‘welcome decrease’ from the record 3.7m the previous week.

It marks the first week that the ONS has recorded a fall in infections since Omicron first took off in late November and the downward trend now matches the Government’s daily stats.

The ONS survey is regarded as the most reliable indicator of the UK’s outbreak because it uses random sampling of around 100,000 people, rather than relying on people coming forward to be tested.

Fatalities were down 9.8 per cent, with 359 deaths recorded today, ad hospitalisations fell 14.5 per cent to 1,752 on Saturday, the latest date data is available for.