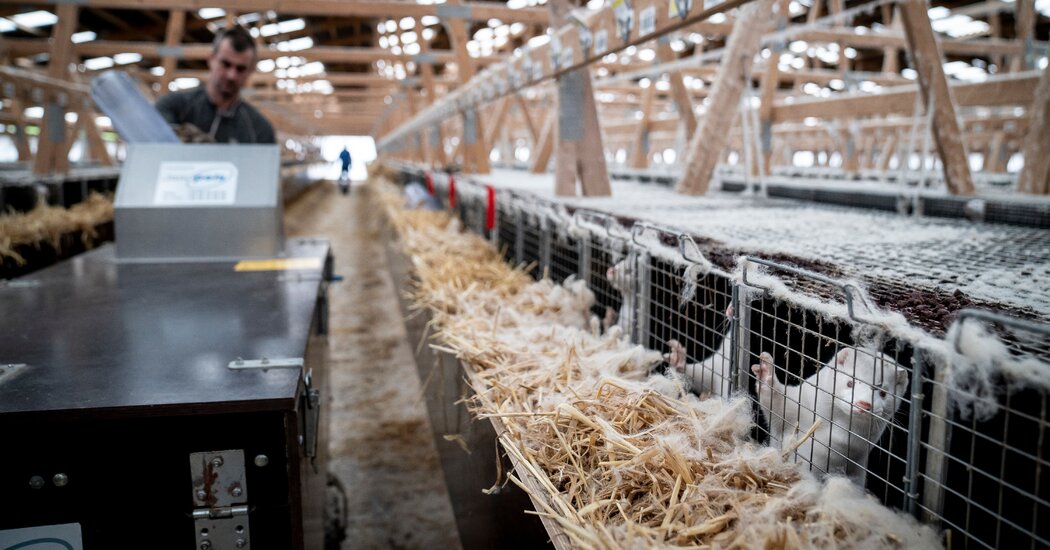 The decision this week by the Danish government to kill millions of mink because of coronavirus concerns, effectively wiping out a major national industry, has put the spotlight on simmering worries among scientists and conservationists about the vulnerability of animals to the pandemic virus, and what infections among animals could mean for humans.

The most disturbing possibility is that the virus could mutate in animals and become more transmissible or more dangerous to humans. In Denmark, the virus has shifted from humans to mink and back to humans, and has mutated in the process. Mink are the only animals known to have passed the coronavirus to humans, except for the initial spillover event from an unknown species. Other animals, like cats and dogs, have been infected by exposure to humans, but there are no known cases of people being infected by exposure to their pets.

The versions of the virus that have mutated in mink and spread to humans are not more transmissible or causing more severe illness in humans. But one of the variants, found in 12 people so far, was less responsive to antibodies in lab tests. Danish health authorities worried that the effectiveness of vaccines in development might be diminished for this variant, and decided to take all possible measures to stop its spread. This included killing all of the country’s mink and effectively locking down the northern part of the country, where the mutated virus was found. The United Kingdom has banned travelers from Denmark who are not U.K. citizens.

The World Health Organization and scientists outside of Denmark have said they have yet to see evidence that this variant will have any effect on vaccines. They have not, however, criticized Denmark’s decision to cull its mink population.

Mink are not the only animals that can be infected with the coronavirus. Dogs, cats, tigers, hamsters, monkeys, ferrets and genetically engineered mice have also been infected.

Dogs and cats, including tigers, seem to suffer few ill effects. The other animals, which are used in laboratory experiments, have exhibited varying responses. Farmed mink, however, have died in large numbers in Europe and in the United States, perhaps partly because of the crowded conditions on those ranches, which could increase the amount of exposure.

Public health experts worry, however, that any species capable of infection could become a reservoir that allowed the virus to re-emerge at any time and infect people. The virus would likely mutate in other animal species, as it has been shown to do in mink. Although most mutations are likely to be harmless, SARS-CoV-2 conceivably could recombine with another coronavirus and become more dangerous. Conservation experts also worry about the effect on animal species that are already in trouble.

One approach to studying susceptibility has been to look at the genomes of animals and see which ones have a genetic sequence that codes for a protein on cells called an ACE2 receptor, which allows the virus to latch on. One team of researchers studied the genomes of more than 400 animals. Another group did a similar study of primates, which are often infected with human respiratory viruses.

“One of the premises for doing this research was that we thought that great apes would be very at risk because of their close relationship to humans, genetically,” said Amanda D. Melin, an anthropologist at the University of Calgary and an author of the primate study.

But, she added, she and her colleagues also wanted to consider “all of the other primates and their potential risk.” In addition to investigating genomes, the team also did computer modeling of the interaction of the virus spike protein with different ACE2 receptors.

The findings of both papers reinforced each other, revealing old world monkeys and all apes to be most at risk. Both papers were released as non-peer-reviewed studies earlier this year.

Dr. Melin and her colleagues have been talking to representatives of wildlife sanctuaries and zoos about the need for caution. Many of these facilities have increased restrictions for the interactions between people and the primates.

Zarin Machanda, of Tufts University, who studies chimpanzee behavior at the Kibale Chimpanzee Project in Uganda, said that the preserve had increased its safety precautions because of the pandemic.

“We’re always cautious about respiratory viruses,” she said, because such viruses are the leading cause of death in the chimps at Kibale. Even the human common cold can be lethal.

Chimpanzees have suffered from outbreaks of other coronaviruses. Normally, humans at Kibale maintain a minimum distance of two dozen feet from chimpanzees; that has been increased to 30 feet or more. Local workers have been staying at the reserve, rather than commuting back and forth to their communities. And the project has reduced the hours for field studies. All these measures were directed by the Ugandan government.

Tony Goldberg, a veterinarian at the University of Wisconsin, Madison, and the head of the Kibale EcoHealth Project, said that he has seen the devastation wrought by respiratory diseases among chimpanzees. A deadly outbreak in 2013 at the reserve turned out to be the result of human rhinovirus C, the most common cause of the common cold worldwide. Until then, it had never been seen in chimps.

“The last thing we need is for SARS-CoV-2 to move into an animal reservoir from which it could re-emerge,” Dr. Goldberg said.

Other researchers are studying species from Beluga whales to deer mice for signs of the coronavirus. Kate Sawatzki, the animal surveillance coordinator for a testing project in pets and other animals at the Cummings School of Veterinary Medicine at Tufts University, said: “To date, we have tested 282 wildlife samples from 22 species, primarily bats in New England rehabilitation facilities, and we are happy to report that none have been positive.”

They have also tested 538 domestic pets, including from households with people with Covid-19, and none have shown signs of active virus. However, Dr. Sawatzki said, the lab also conducted blood tests for antibodies, showing exposure, and there they did find antibodies, as is common in humans. The pets seemed to be getting infected but not getting sick or passing the virus on.

So far, the mink in Denmark are the only known instance of the virus infecting an animal, mutating, and transferring back to humans. Emma Hodcroft of the University of Basel, Switzerland, traces various mutated versions of the coronavirus as it has spread through Europe and has reviewed scientific information released by Danish health authorities. She said she applauded the government’s decision to take swift action and cull the mink: “Many countries have hesitated and waited before acting, and it can be incredibly detrimental in the face of SARS-CoV-2, as we see.”

But she did not approve of the way the information was released, particularly in the government’s Wednesday news briefing, which warned of a dire threat to potential human vaccines but offered no detail for the concern. “The communication of the science could have been much clearer and led to less worry around the world,” Dr. Hodcroft said.