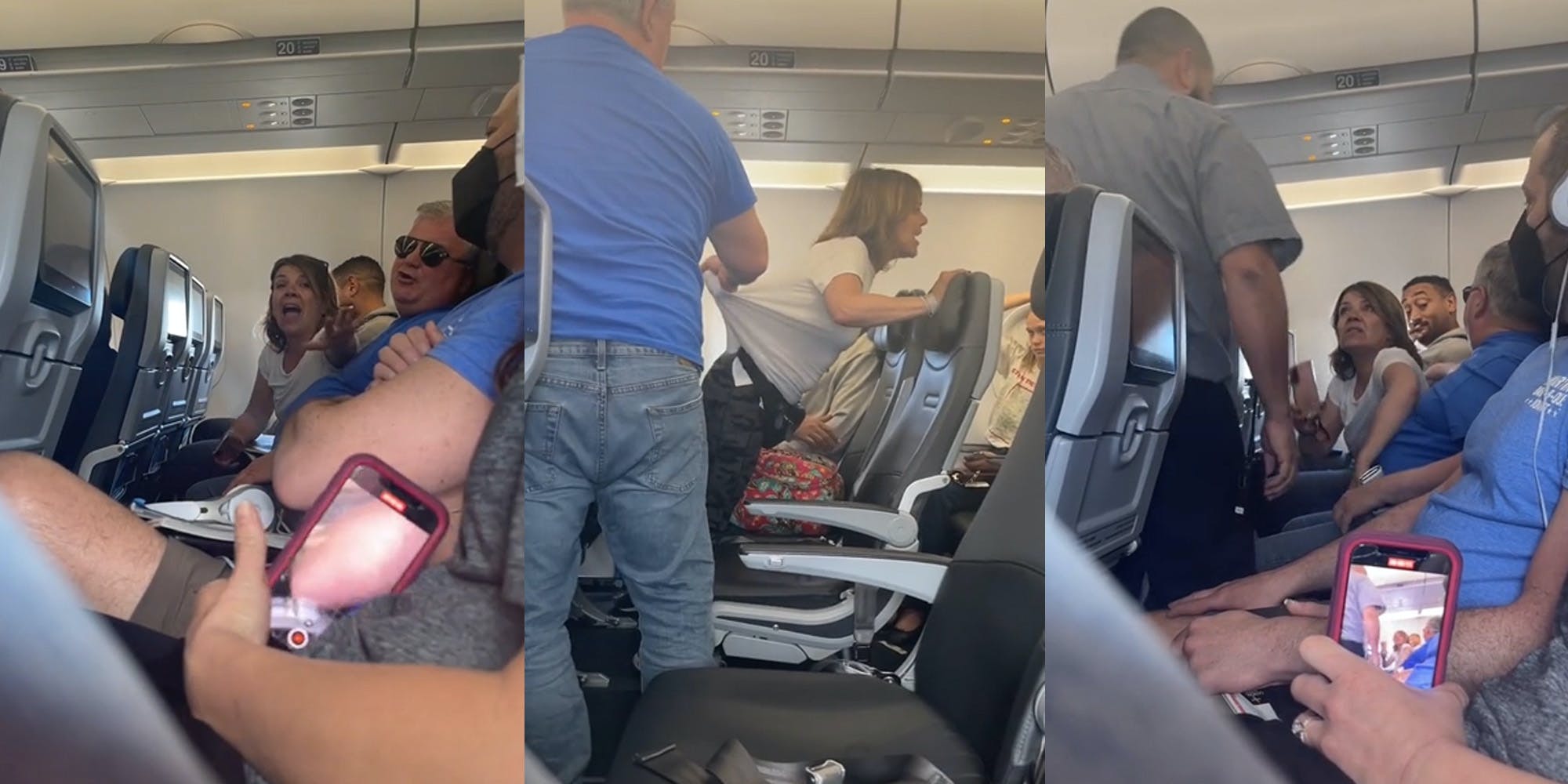 Viral TikTok footage shows a couple getting kicked off a plane after yelling racist and homophobic slurs.

The TikTok video was posted by verified user @charlottedalessio and garnered 5.6 million views in about a day.

In the video, a white woman is seen arguing with a flight attendant and refusing to leave the plane.

“You don’t like the words coming out of my mouth. No words, no words,” the woman says, speaking over the flight attendant. “Free speech is dead.”

The woman tells the flight attendant that she’s not leaving the plane and that he’d have to deboard everyone if he deboarded her and her partner.

“This is ridiculous,” the woman says. Then, turning to address the other passengers on the plane, she adds, “Do you guys see what’s happening in America? You didn’t like what he said, and now we’re getting kicked off a plane. And all of you all are going to have to wait. This is fucking outrageous.”

“We’re going to turn into China. It’s coming,” the woman yells. Then she makes sheep noises.

The white man seated next to the woman, remains silent. The man seated on the other side of the woman is seen silently laughing while rubbing his forehead exasperatedly.

The woman says something unintelligible before exaggeratedly saying she “loves” Elon Musk.

“He is the best. Elon!” the woman cheers, throwing her hands forward. “He is the fucking king.”

At that point, the woman’s partner says something, but the TikToker bleeped it out during the video. The woman turns to address the man seated across the aisle from her. She asked for his name, saying she was going to sue him. The woman’s man turns to the man, calling him a “jerk off,” “fat dick,” and another censored insult.

The woman loudly yells toward the front of the plane that she and her partner didn’t do anything before turning to record the man she blamed for getting them kicked off the plane.

Eventually, a flight attendant or security guard approaches the couple and tries to unbuckle the man’s seatbelt. The woman pushes him away and tries to refasten her partner’s seatbelt, saying they’re not getting off the plane.

A voice comes on over the loudspeaker, announcing that the couple needs to leave the plane, but the woman shouts over it, claiming innocence.

“We have to get off the plane because we’re Trump supporters,” the woman claims. “Seriously, I really think that’s what it is.”

By then, the man is standing and appears to be getting ready to deboard the plane while the woman yells at the people behind her row.

Viewers were appalled by the couple’s outburst. Some called it “embarrassing.”

“They’re literally arguing with the wall like no one’s even talking to them it’s so embarrassing,” one viewer commented on the video.

“i feel embarrassed and i wasn’t even on the plane,” another viewer commented.

Some viewers dubbed the woman a Karen.

“They really do have just the one template for a Karen,” one TikTok user said.

“She calls everyone sheep but literally just repeats what every other Karen says,” another user wrote.

Multiple viewers pointed out the other passengers, especially the man seated next to the woman, laughing hysterically at the woman’s rant.

“the guy beside her absolutely losing it has me rolling,” one viewer commented.

The Daily Dot reached out to TikTok user @charlottedalessio via TikTok comment about the video.

Cecilia Lenzen is a journalism student at the University of Texas at Arlington and a freelance reporter for the Daily Dot.