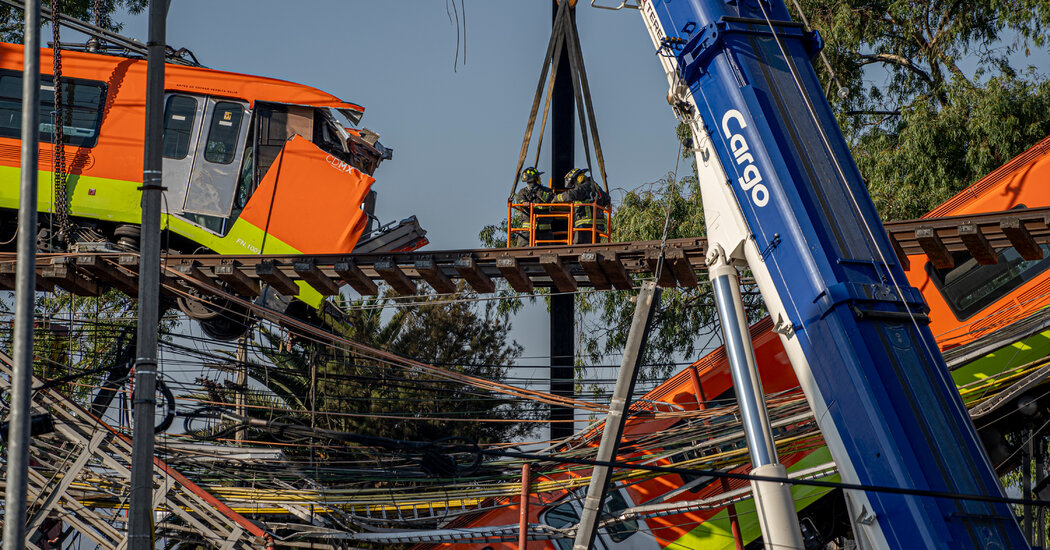 MEXICO CITY — Construction errors led to the May collapse of an overpass in Mexico City’s subway system that killed 26 people and injured scores more, according to the preliminary results of an independent investigation released by the city’s government on Wednesday.

The report, produced by the Norwegian risk management company DNV, suggests that serious problems with the welding and placement of metal studs, linchpins of the entire structure, directly contributed to the collapse.

“We can preliminarily state that the incident was caused by a structural failure,” the report said, citing “deficiencies in the construction process.”

The results support the findings of a New York Times investigation that highlighted shoddy construction on the metro line. Some of the studs holding the structure together appeared to have failed because of bad welds, The Times found, a crucial mistake that probably caused the overpass to give way.

Engineers consulted by The Times pointed to the presence of ceramic rings, or ferrules, left in place after the welding process, and to irregularly placed studs as evidence of subpar workmanship — findings that were confirmed by the DNV investigation.

Its report documented a “failure to remove the protective ceramic” around the studs, which “reduced the area of adhesion” with the concrete that held up the tracks. Too few studs were used to fuse the structure together, and their placement was inconsistent, something that “contradicts the design” of the overpass, the report said, echoing another finding of the Times investigation.

The investigators for the DNV also noted that different types of concrete had been used to build the overpass, possibly because workers had to make adjustments on site during construction. On the steel beam underneath the overpass, the report found poorly planned, problematic welding.

DNV said its report was based on “the field investigation and the laboratory testing of samples from the accident” and that it “only contains DNV’s hypothesis at this point.” The full investigation will be finished later this year, the company said in a statement.

Mexico City’s government, which hired DNV to examine the causes of the crash, is also conducting its own investigation into the accident.

“We promised to provide comprehensive care to the victims and to hire a specialized company to understand with technical professionalism and, based on scientific evidence, the root cause of this terrible tragedy,” Claudia Sheinbaum, the mayor of Mexico City, said during the presentation of the DNV report.

The results of the independent inquiry could spell trouble for two of Mexico’s most powerful figures: Marcelo Ebrard, the foreign secretary, and Carlos Slim, one of the world’s richest businessmen.

Mr. Ebrard, the mayor of Mexico City when the line was built, wanted it completed before he left office in 2012, according to multiple people who worked on the project. He is seen as a powerful contender to succeed President Andrés Manuel López Obrador in Mexico’s next presidential elections in 2024.

In response to the release of the preliminary report, Mr. Ebrard said in a statement that determining the cause of the crash would require both a technical investigation and “an inquiry that reviews the entire decision-making process in the design, layout, supervision and maintenance” of the metro line.

Mr. Slim’s conglomerate, Group Carso, built Line 12 — the part of the metro that collapsed — to expand the company into the lucrative rail industry.

On Wednesday, Ms. Sheinbaum said she would “contact the companies that were part of the construction consortium that built Line 12 to set up a technical dialogue.”

In response to earlier questions from The Times, Antonio Gómez García, chief executive of Group Carso, suggested that maintenance failures may have been to blame for the subway’s collapse. Mr. Ebrard had previously said that it was impossible to know whether his successor had “conducted all of the maintenance” required after large earthquakes.

But the preliminary report from DNV found that the tracks and their mechanical components were “in normal conditions” and met with “routine maintenance protocols.” Mexico City metro workers also said they carried out “daily preventive maintenance activities,” according to the report. Investigators will continue to analyze whether the structure was subjected to abnormal weight that could have caused the beams to buckle.

Carso is now building a significant part of the Tren Maya, a 950-mile railway intended to bolster the economy of southern Mexico — one of the country’s poorest regions — and stand as Mr. López Obrador’s legacy project.

Some engineers and architects working on the Tren Maya have complained of problems similar to those faced when they built the subway: a rushed, disorganized process that has no master plan to guide construction. And Mr. López Obrador has insisted that he wants the Tren Maya to be finished before he leaves office in 2024.