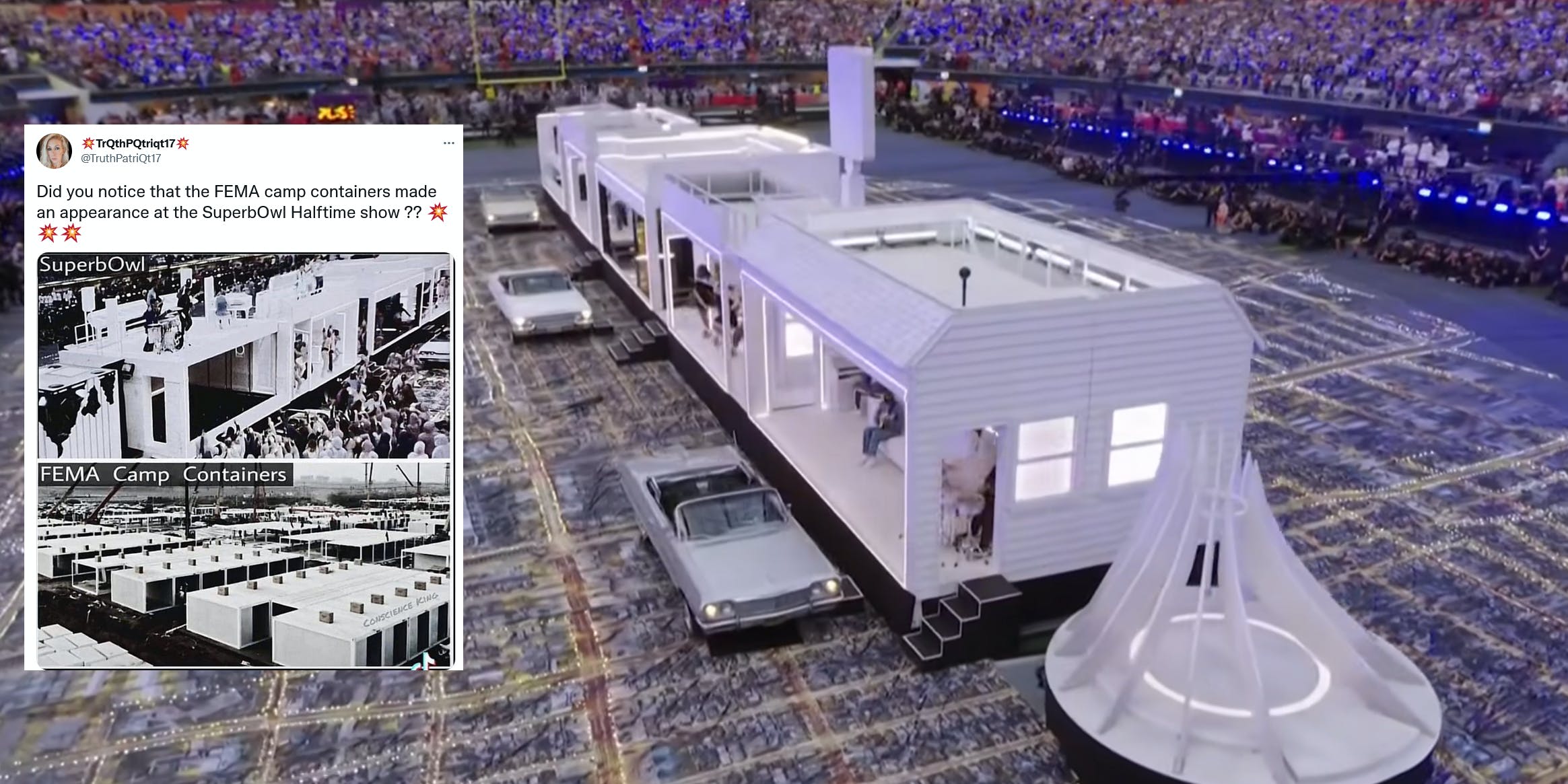 Welcome to the Monday edition of Internet Insider, where we dissect online disinformation—one dumb conspiracy at a time. Today we look at a Super Bowl conspiracy theory.

Sign up to receive this newsletter in your inbox.

While millions across the world enjoyed the 2022 Super Bowl, conspiracy theorists became convinced that internment camp containers had been prominently displayed during the halftime show.

But as you’ve likely guessed, the claims aren’t true.

The allegation began last week when hip-hop legends Dr. Dre, Snoop Dogg, Mary J. Blige, Kendrick Lamar, 50 Cent, and Eminem took to the field at SoFi Stadium in Inglewood, California, to perform some of their most iconic hits.

The set for the show featured a map of Dre’s hometown city of Compton, California on the floor as well as several crate-like structures containing, among other things, a South Central-style bungalow.

Conspiracy theorists, as is often the case, saw something much more sinister.

A Facebook user argued last Monday that the set had actually been built out of internet camp containers from the Federal Emergency Management Agency (FEMA).

If you’ve followed this conspiracy-debunking newsletter for a while, you’ll know that FEMA, an agency of the United States Department of Homeland Security, is a magnet for conspiracy theories.

It also has long been accused by conspiracy theorists of plotting to force Americans into makeshift concentration camps given their role in disaster response.

This time was no different.

The column continues below.

Keep calm and fidget on…

Who says fidget toys are just for kids? The internet is now brimming with fidget spinners and do-dads for all ages. These are the toys we wish we had growing up while we were spinning our pens or bouncing the desk of the poor kid sitting in front of us. Here’s your chance to keep calm and fidget on with the best fidget toys for active brains, hands, and even feet.

The Facebook post was quickly inundated with comments from other conspiracy theorists who were seemingly shocked at the display.

“Brilliant thank you,” one user responded. “I watched some of it earlier & couldn’t work out what the boxes represent. Of course now I see it.”

Super Bowl halftime shows have also been repeatedly accused of secretly embedding Satanic imagery at the behest of a global elite.

“Exactly, they just adore flaunting their sinister plans out in the open,” another said of the display.

Others argued that only those with special powers from God could spot the so-called “FEMA camp containers” onstage.

The image was also shared widely across other social media platforms such as Twitter by supporters of the QAnon conspiracy theory.

Yet despite the breathless concerns from users on Facebook, the entire claim is patently false.

For starters, the bottom portion of the image being shared by conspiracy theorists that purports to show FEMA camp containers does not come from the agency or even the U.S.

The image was taken by the Chinese news agency Xinhua in January of last year and shows an actual COVID-19 quarantine center in the northern Hebei Province of Shijiazhuang.

Despite the false comparison, many remained convinced that the conspiratorial portrayal on Facebook was accurate.

“I knew the resemblance was uncanny,” another Facebook user added.

In a statement to Lead Stories, a spokesperson for FEMA called the allegations “absolutely false.”

The site has faced these kind of allegations before.

The Christian fundraising website has suffered 3 leaks in just the last 2 weeks.

For guilt-free nightcaps and pain-free mornings. *

The post Conspiracy theorists think ‘FEMA Camp Containers’ were used during the Super Bowl appeared first on The Daily Dot.