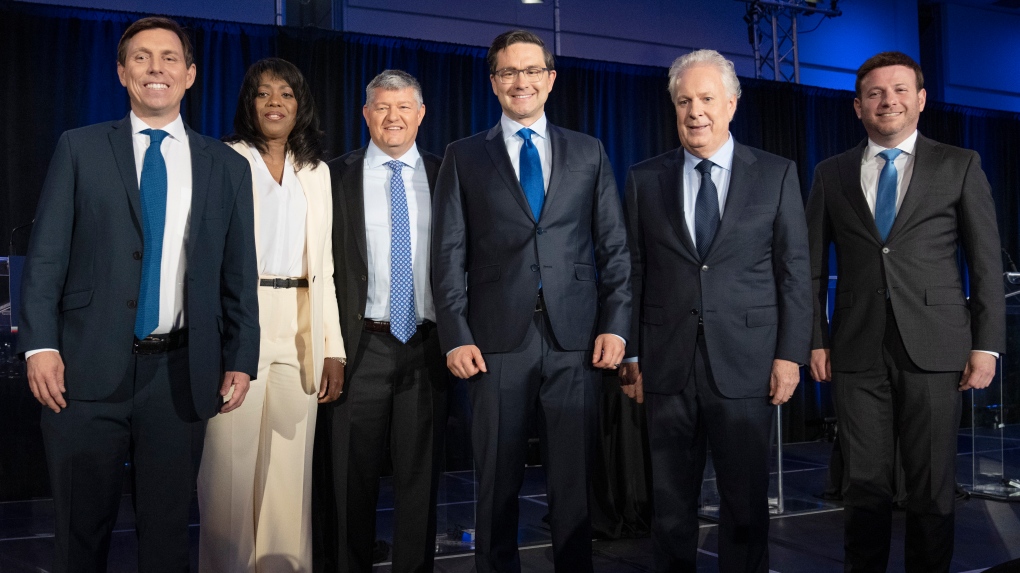 
There are just two weeks left until the Conservative Party of Canada announces its new leader on Sept. 10.


While nearly half of the ballots have already been cast, the five candidates — Pierre Poilievre, Jean Charest, Roman Baber, Scott Aitchison, and Leslyn Lewis — are busy rallying support in a final get-out-the-vote push.


The race for the next leader of the party began in early February, when Erin O’Toole resigned from the top job. Contenders for the position then had to pay the necessary registration fees and submit signatures from 500 party members in April to get their name on the ballot.


Ballots were sent out to a record number of party members in early July, and need to be returned by Sept. 6. Approximately 326,000 ballots have been returned as of Thursday, according to party spokesperson Yaroslav Baran.


With the countdown on, CTVNews.ca has compiled a round up of the key moments from the race.


In late July, the party announced its finalized membership list had reached nearly 679,000 people, claiming the number makes the Conservative Party the largest party in Canadian history by memberships.


Baran said at the time membership had quadrupled since last year. Every province and territory saw its membership at least double, he said — while the number quadrupled in Newfoundland and Labrador, New Brunswick, and British Columbia.


The number of ballots returned so far has already surpassed the number of votes cast in the 2020 leadership election.


Party president Robert Batherson said in a release in July the “massive surge in membership” proves the excitement the race has caused, and “the momentum for a change of government in Ottawa.”


The party has refused to release the number of memberships sold by individual leadership campaigns, so it’s unknown whether any one candidate can claim responsibility for the swells in certain regions. But Pierre Poilievre claimed in June his campaign had sold nearly 312,000 memberships.


CHAREST AND POILIEVRE ARE PERCEIVED FRONTRUNNERS


The race appears to be down to two frontrunners: long-time MP Pierre Poilievre, and former Quebec Premier Jean Charest.


Poilievre, who’s been an MP for 18 years, has been campaigning on a message of promising freedom for Canadians and getting rid of the “gatekeepers.” The Ottawa-area MP has drawn the largest crowds of all his competitors since he announced his candidacy in February, and claims to have been endorsed by the majority of the federal Conservative caucus.


In July, former Prime Minister Stephen Harper endorsed Poilievre, saying in a video released on Twitter that Poilievre has made the “strongest case” for being able to bring in new party members and win the next general election.


But Poilievre has also been the primary target of condemnation from many politicians and pundits, critical of his populist policies and de-legitimization of certain institutions, such as the Bank of Canada.


Charest, for his part, has been endorsed by 16 MPs, as of July, and has widely been viewed as the more moderate candidate, campaigning on his track record as the former premier of Quebec.


The two frontrunner candidates have focused many of their attacks on the other throughout the race, with Poilievre accusing Charest of being a Liberal, and Charest saying Poilievre should be disqualified from the race for supporting the trucker convoy in February.


According to a Leger poll released in August, Poilievre is the clear favourite among CPC members, while Charest has more support among Canadians overall.


The discrepancy could mean challenges in the next general election, Leger’s executive vice-president Christian Bourque told The Canadian Press, depending on who becomes leader and whether they’re able to unite the party to unseat the Liberal government.


Charest has not said whether he’d still run as a Conservative MP in the next general election if he loses the leadership.


Brown initially said he’d fight back against what he called “phantom allegations,” and insisted his campaign “did nothing wrong.”


But Debra Jodoin, a longtime Conservative organizer, later released a statement through her lawyer claiming Brown was involved in having a third-party company pay her for work she did on his campaign.


A committee reviewing Brown’s ousting later concluded the party had enough evidence to disqualify him, The Canadian Press reported. Brown has since announced his bid for re-election as the mayor of Brampton.


Conservative Strategist and President of Texture Communications Melanie Paradis told CTV News Channel in July it would be very hard to predict how Brown’s disqualification could impact the race, because voting is weighted by riding, as opposed to a one-to-one vote system.


“It’s going to be very interesting to see how this shakes out,” she said. “Where do those voters go? The people that he recruited, do they go anywhere? Or are they going to drop off? In which case, that would completely change the math on the points in each riding,” Paradis said.


Brown’s name is still on the ballots, however, because the party “simply [didn’t] have the time to do a reprint” of the nearly 679,000 ballots, while ensuring voters have time to return their completed ballot by the Sept. 6 deadline, party president Robert Batherson told CTV News Channel in July.


Since May, the candidates have participated in three official debates.


The first official English-language debate in mid May promised to focus on policy, but drew heavy criticism for its format. The debate featured a sad trombone sound effect when candidates broke any debate rules, and questions about pop culture preferences, from favourite television shows to music to books, while candidates had to hold up paddles when they wanted to speak.


During the French-language debate a couple weeks later, candidates took the opportunity of what they thought might be the last official debate to make pointed attacks on their opponents.


But after Charest pushed for a third official debate, arguing new party members would benefit, the party held one Aug. 3, with just three candidates participating.


A BATTLE FOR THE SOUL OF THE PARTY?


The race has often been called a battle for the soul of the Conservative party, with many asking how the winner hopes to bring all its members — and the race’s losers — under one big blue tent after such a divisive campaign.


Poilievre’s critics have accused him of eroding Canadians’ trust in their institutions, after he’s repeatedly promised to “get rid of the gatekeepers.” Meanwhile, Baber and MP Leslyn Lewis have been accused of peddling in conspiracy theories.


Baber has been vocal throughout the race about his opposition to pandemic measures, which is largely what got him ousted from Ontario Premier Doug Ford’s caucus last year, while Lewis has raised concerns about the World Economic Forum, the WHO Pandemic Treaty, the effectiveness of COVID-19 vaccines and abortion.


Former British Columbia Premier Christy Clark — while also endorsing Charest — gave a speech in Edmonton earlier in this month in which she said the party is making “its race for the extremes to play to the very edges of the political divide.”


But some candidates have touted their messages of cooperation and the need for party unity. Lewis published a letter in August stating she “hate(s) politics,” and refuses to attack her opponents. And Aitchison has promised to “bring respect back to politics in Ottawa” throughout his “Hope and Respect Tour.”


And the campaign’s final official debate had a big focus on party unity, with the three participants making an effort to move away from the divisive rhetoric of the last six months, and instead emphasize the need to come together after the new leader is announced.


With files from CTV’s Rachel Aiello and Sarah Turnbull, and The Canadian Press