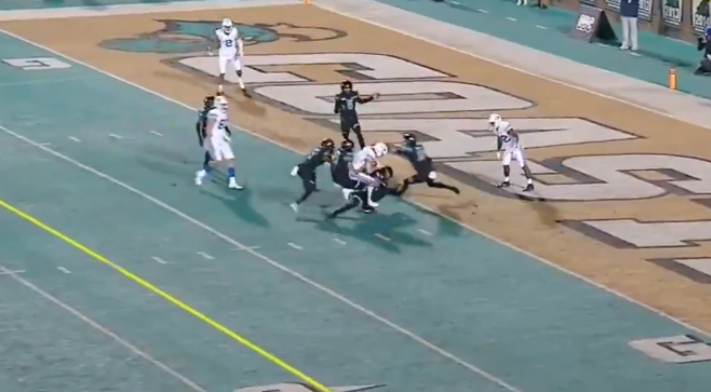 College football’s game of the year was not some out-of-conference epic between two major conference programs in an NFL arena, nor was it an SEC or Big Ten showdown that served as a de facto College Football Playoff play-in game. No, the distinction goes to a matchup between 13th-ranked BYU and No. 18 Coastal Carolina in a game that was finalized on Thursday.

The two undefeated programs exchanged haymakers for 60 minutes on Saturday in Conway, SC, in a matchup that only happened because the schools had openings on their calendar. Ultimately, thanks to a CJ Marble rush at the start of the fourth quarter and a breathtaking stop to end the game, the Chanticleers came out on top, 22-17.

BYU had a chance to win the game at the very end, getting the ball on their 18 yard-line with 55 seconds left. Heisman hopeful signal caller Zach Wilson marched them down the field, and with seven seconds left, they got the ball down to the opposite 18. In their only attempt for the end zone, Wilson found Dax Mine, who came this close

Advertisement
to scoring. Unfortunately for him, Coastal’s players swarmed him, and safety Mateo Sudipo threw him to the ground.
Advertisement

I, for one, did not expect a game thrown together hours before to have a Kevin Dyson against the Rams ending, but it was absolutely the sort of ending this game deserved. It was that close and that hotly contested that it’s unfortunate that someone had to lose it, but ultimately, the Chanticleers made the play they needed to make to come out on top. Now please, put them in the Playoff, committee.